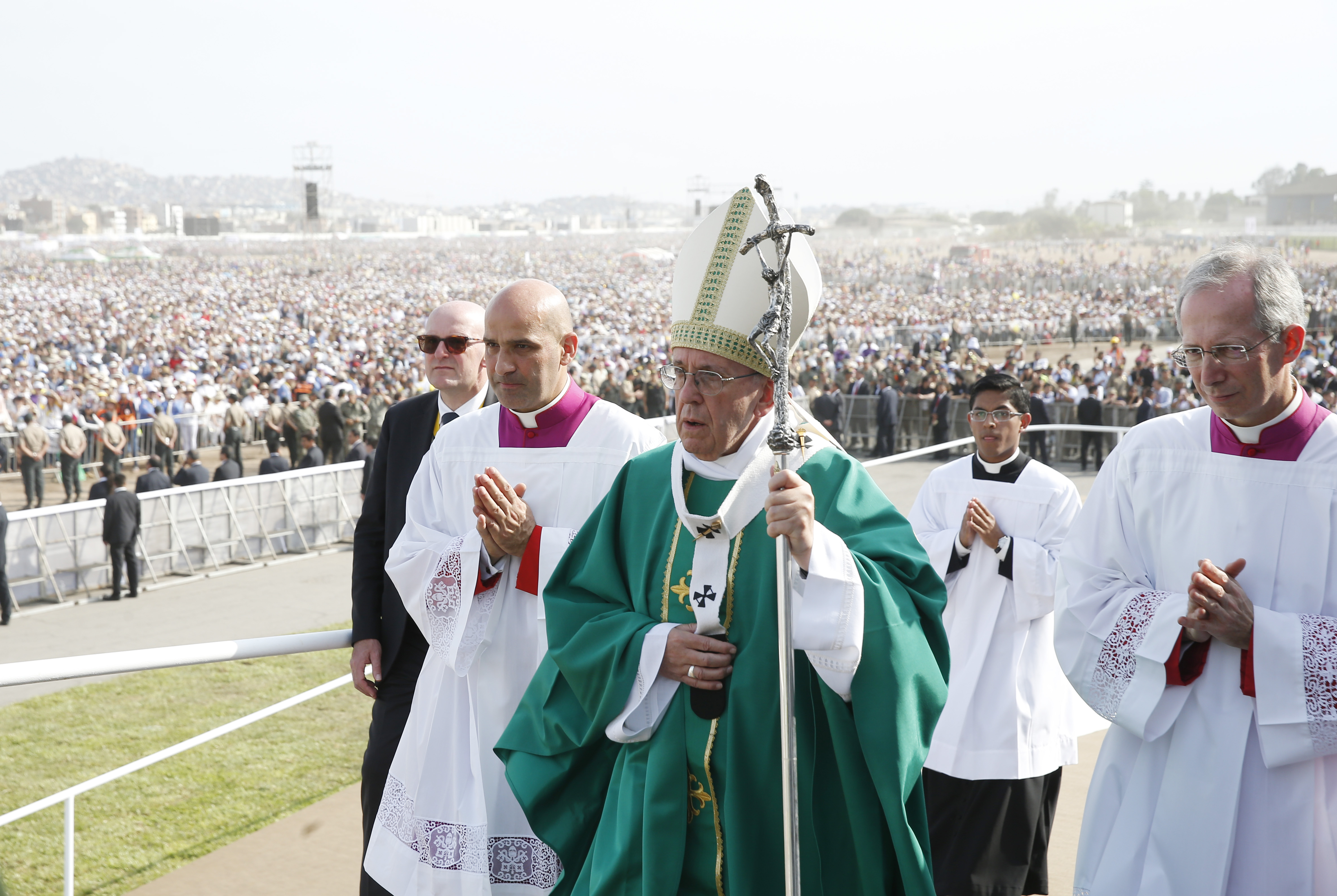 Pope Francis took his message of hope to this sprawling, dusty capital of Peru, celebrating Mass within view of the rocky, waterless Andean slopes where most of the city's poorest residents live.

The day's Scripture readings, in which Jonah was sent to Nineveh and Jesus set out toward Galilee, "reveal a God who turns his gaze toward cities, past and present," the pope said in his homily.

Crowds lined the pope's route to the Las Palmas military base, where thousands of people arrived during the night and throughout the morning to participate in the Mass.

Lima's heat and blazing sun did not wither the spirits of the estimated 1.3 million Mass attendees, who chanted and sang as they waited for the liturgy to begin.

Mariana Costa of Lima felt fortunate. She had missed a chance to see Francis in Poland, she said, "and now I have the opportunity to see him in my own country."

As a young adult, she was touched by his words to youth.

"Ultimately, we're the ones who have to work to make sure this faith is not lost," she said.

Sister Maria Lucero of Lima was struck by three messages the pope had for the priests, religious and seminarians with whom he met in Trujillo the day before.

"He said to remember what we are (and spoke of) joy and gratitude to God for everything we have and do not deserve," she said.

His words kindled a desire to renew her efforts, "because the people here need it," she said.

The scores of concelebrants included Boston Cardinal Sean O'Malley, who was in Lima to celebrate the 60th anniversary of the founding of the Boston-based Missionary Society of St. James the Apostle, whose priests have worked in many Latin American countries, including Peru. O'Malley had spoken out Jan. 20 about Francis' defense of a Chilean bishop accused of covering up sexual abuse. The cardinal said he understood why victims were hurt by the pope's words.

The place where Francis presided at the liturgy is not far from the vast neighborhood of Villa El Salvador, where Pope John Paul II celebrated Mass in 1985, when it was a dusty shantytown in which community leaders, many of whom were active in parishes, were threatened by terrorist violence.

The poorest neighborhoods form rings around Lima and other Latin American cities, as people migrate from other parts of the country in search of opportunities.

Most build their own houses bit by bit, sometimes in hazardous areas vulnerable to disasters, like the unusual rains in early 2017 that left thousands homeless on the east side of Lima and in cities such as Trujillo, which the pope visited Jan. 20.

The majority also work in the informal economy, eking out a living with day labor, selling goods in markets or working in small, family-run businesses with no health insurance, pension or vacation time.

The pope spoke to them when he talked of "our cities, with their daily situations of pain and injustice," which "can leave us tempted to flee, to hide, to run away."

While some people can to build their lives, others are left "living on the fringes of our cities and lacking the conditions needed for a dignified existence," he said. "It is painful to realize that among these 'urban remnants' all too often we see the faces of children and adolescents. We look at the face of the future."

Seeing those things, people may be tempted to become "indifferent, anonymous and deaf to others, cold and hard of heart," he said.

Jesus, who entered Galilee upon hearing of John the Baptist's arrest, and shows a different way to respond, he said.

Jesus "began to sow the seed of a great hope," and the rippling effect of that joy and good news has been passed down through the apostles and saints, including St. Rose of Lima and St. Martin of Porres, whose relics he venerated in the morning,  Francis said.

"It has come to us as a timely antidote to the globalization of indifference," he said. "In the face of that love, one cannot remain indifferent."

Walking through the city with his disciples, Jesus saw people who had "given up in the face of indifference, laid low by the grave sin of corruption," Francis said. "He begins to bring light to many situations that had killed the hope of his people and to awaken a new hope."

Jesus taught his disciples to see things they had overlooked before and to notice new needs, he said.

"The kingdom of heaven means finding in Jesus a God who gets involved with the lives of his people."

His words rang especially true after six days in which he raised issues such as corruption, rapacious consumerism, environmental devastation, organized crime, violence against women and industrial activities such as mining and industrial agriculture, which strip indigenous peoples of their lands and livelihoods.

As he often does, the pope challenged bishops and clergy to avoid clericalism and walk closely with the people. He called on government officials to listen to and respond to the needs of native peoples, youth, the elderly and children.

Jesus "continues to walk on our streets. He knocks today, as he did yesterday, on our doors and hearts, in order to rekindle the flame of hope," the pope told the throng of Mass-goers.

"Today the Lord calls each of you to walk with him in the city, in your city. He invites you to become his missionary disciple, so you can become part of that great whisper that wants to keep echoing in the different corners of our lives: Rejoice, the Lord is with you!"