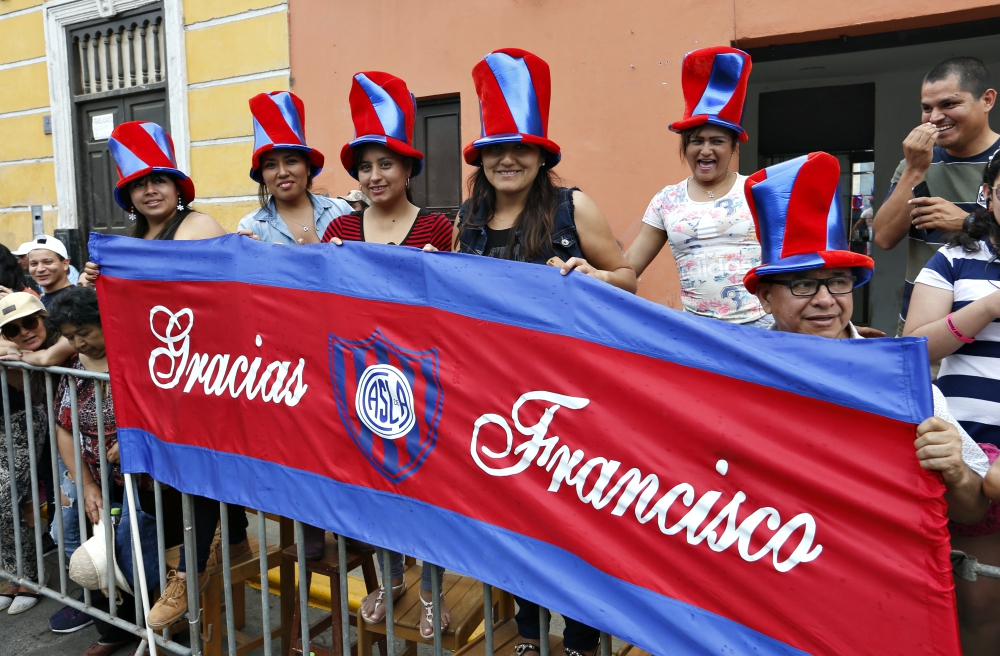 People hold a banner thanking Pope Francis along the parade route for the pope in Trujillo, Peru, Jan. 20. (CNS/Paul Haring)

Pope Francis exhorted Peru's Catholic bishops Jan. 21 to not shy away from speaking out on behalf of their people even when it may upset the powerful, calling the prelates to have "an episcopal spirit of prophecy unafraid of denouncing abuses and excesses."

In one of his last events during a four-day visit to Peru, Francis told the country's 68 bishops to emulate the 16th-century St. Turibius of Mogrovejo, an archbishop of Lima who excommunicated a colonial Spanish chief magistrate because of his poor treatment of indigenous peoples.

That action, the pope said, placed the saint "against a whole system of corruption and a web of interests that drew upon him the enmity of many."

But Francis continued: "The pastor ... knows that spiritual good can never be separated from just material good, and all the more so when the integrity and dignity of persons is at risk."

"There can be no authentic evangelization that does not point out and denounce every sin against the lives of our brothers and sisters, especially those who are most vulnerable," he pointedly told the prelates.

Francis is visiting Peru through the afternoon on Jan. 21 on the second leg of a weeklong journey abroad that started in neighboring Chile. The trip has been marked by the pope's strong denunciations of corruption and calls for protection of native peoples, but also by his defense of a Chilean bishop accused of covering up sexual abuse as a priest in the 1980s and '90s.

In a rare and blunt response from a church prelate to a controversial action of a pope, Boston Cardinal Sean O'Malley, one of Francis' key advisers on abuse issues, issued a statement Jan. 20 acknowledging that the pope's defense of Osorno Bishop Juan Barros Madrid was "a source of great pain" for survivors.

Whether Peru's government has the best interests of its people at heart has been a hot political question recently, with President Pedro Kuczynski narrowly escaping impeachment over bribery charges in December.

In an unscheduled 40-minute question-and-answer session with the Peruvian bishops following his prepared talk at the archbishop's palace of Lima, Francis said political life across Latin America is in "crisis" due to corruption.

"Denouncing it is the solution," he said. "Do not neglect it, because if we fall into the hands of people who only understand the language of corruption, we're fried!"

He also encouraged the bishops to practice "paternity" with their priests, "never taking an irreversible decision" with a priest without first going through some sort of process with him.

In his prepared remarks, Francis told the prelates to emulate Turibius' example in learning the language of their people and looking after their priests even to the point of their own suffering.

The pope spoke about the saint, noted for his zeal in catechizing Peru's native peoples and stressing evangelization in local languages such as Quechua and Aymara, as "crossing to the other shore," or getting to where people needed him most.

"Visiting and living with his people, he realized that it was not enough just to be there physically, but to learn to speak the language of others, for only in this way could the Gospel be understood and touch the heart," Francis said. 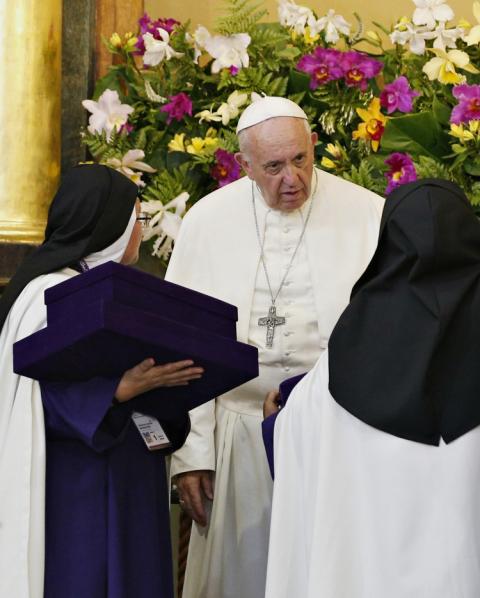 He encouraged Peru's bishops to learn the new languages of the digital age so they can "know the real language of our young people."

Francis recalled a story of Turibius going to visit one of priests, seeing he had poor living conditions, and taking off his own shirt to give it to the priest.

"He was a pastor who knew his priests," said Francis. "A pastor who tried to visit them, to accompany them, to encourage them and to admonish them. He reminded his priests that they were pastors and not shopkeepers."

"He did not do this from a desk, and so he knew his sheep and they recognized, in his voice, the voice of the good shepherd," the pope continued.

Earlier Jan. 21, Francis met with about 500 of Peru's contemplative women religious at Lima's Shrine of Las Nazarenas, which houses a famous painting of Jesus that survived a devastating 17th-century earthquake and has since been known as the "Christ of Miracles."

In an off-the-cuff moment with the nuns, Francis asked them to "pray for the unity of the Peruvian church, because it is tempted by disunity."

Later Jan. 21, Francis is to celebrate an open-air Mass as his last event in Peru. Hundreds of thousands are expected to turn out for the liturgy.

The pope will land back in Rome on the afternoon of Jan. 22.