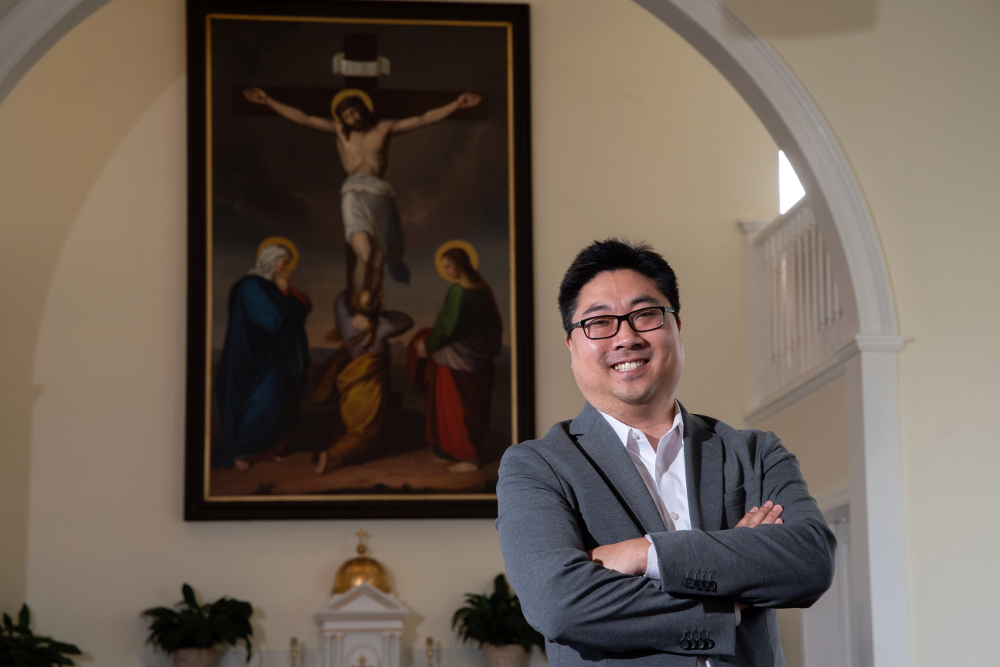 Zachary Stachowski, music minister at St. Ignatius of Loyola Church in Ijamsville, Maryland, wrote the song "How Can We Pray," in response to the abuse crisis in the Catholic Church. (CNS/Catholic Review/Kevin J. Parks)

"How can we pray when we feel betrayed?"

The song continues, offering more questions, but no answers.

"How Can We Pray?" was written by Zachary Stachowski, director of music ministry at St. Ignatius of Loyola in Ijamsville, Maryland, moved by the anger he felt immediately after the Pennsylvania grand jury report on clergy sexual abuse was released in mid-August.

After posting the sheet music to his personal Facebook page, nearly 300 people reacted, 67 commented and 80 shared, including the pages of national music organizations such as the National Association of Pastoral Musicians.

Stachowski has heard from music ministers who have used the song as far away as Ireland and Redlands, California.

"When the news started coming out of the grand jury in Pennsylvania, I just started noticing the uproar on social media," Stachowski said. "It seemed to be a lot of anger, a lot of hurt."

The music that was being used in the wake of the grand jury report, however, did not reflect those emotions.

"But I was still in a place of pretty significant anger and bitterness and hurt," he told the Catholic Review, the news outlet of the Archdiocese of Baltimore. "That's where this song came from, and it turned out that it really resonated with a lot of people."

As the song spread, more and more people contacted Stachowski for sheet music and recordings.

"It was really humbling as a composer to know that you had kind of struck a chord that was where a lot of people were at with the tragedy," Stachowski said. "I just hope that it has helped people to pray and to voice some really difficult emotions."

Of the approximately 15 songs Stachowski has published, this was the first he released through social media, rather than typical publishing timelines.

"It just seemed like such an urgent need at the time," he said, "that while usually I probably would've waited and worked more before showing it to anyone, I just thought I'd put this out there as soon as possible."

The comments on Stachowski's Facebook post included "tremendous" from David Haas, a renowned liturgical composer and musician who has collaborated with Stachowski on multiple projects, including the latter's debut CD, "God Never Tires," released in July 2017.

A native of Clinton Township, Michigan, Stachowski has been involved in music ministry since middle school. A violinist since age 3, he studied violin performance at Butler University in Indianapolis and the University of Maryland to earn his undergraduate and graduate degrees, respectively.

His first music ministry gig in Maryland was at St. Andrew by the Bay in Annapolis. He moved to St. Ignatius in Frederick County in August 2017.

"To help facilitate that kind of sung prayer with the assembly has always been something that has inspired me and something that I've just really fallen in love with," said Stachowski, a 23-year veteran of the music ministry field. "My favorite instrument, I tell people, is the sound of the assembly singing. To play that every week is always a great thing."

As parishes around the Archdiocese of Baltimore responded to the sexual abuse crisis in different ways, St. Ignatius held a nine-part prayer series in as many weeks, each focused on a specific theme. When the theme was anger, "How Can We Pray?" was used.

Stachowski's faith in the Gospel and Jesus Christ remains resolute. Music, he said, can unite the faithful who find that they are not alone with questions and emotions on a difficult subject.

"As a liturgical composer, what we're always trying to do is to write songs that we can sing collectively," Stachowski said. "Music ... gives us the vehicle to do something together in one voice to share the same experience in time like no other medium can."

[Emily Rosenthal is a staff writer for the Catholic Review, the news website and magazine of the Archdiocese of Baltimore.]