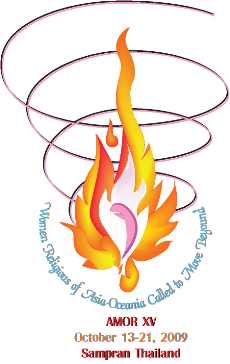 When the women religious leaders of Asia and Oceania gather outside of Bangkok, Thailand, next month they will be doing so for the 15th time to assess their collective missions and to better enable their local congregations to be of service to the church and wider society.

The Oct. 13-21 gathering will be held at the Baan Phuwaan retreat center. The women will come together in an assembly called AMOR XV, whose theme this year is “Called to Move Beyond: Jesus Encounters the Syro-Phoenician Woman.”

AMOR stands for Asia-Oceania Meeting of Religious. The October gathering will involve sessions of prayer, reflection, social analysis and goal-setting. Out of these daily sessions the women will write a statement aimed at providing direction to women religious communities in the years ahead.

The group is voluntary and assembles every two to three years as a forum for the exchange of experiences and ideas, and for mutual support and solidarity. A newsletter the organization publishes three to four times annually also helps foster communication.

The local churches of Asia lived and worked in relative isolation from each other until the 1970s. Until then a local bishop was more likely to know a bishop in Rome than one from another Asian country. The same could be said about women religious congregation heads.

However, a new kind of epiphany occurred in 1970 when Pope Paul VI visited Manila in the Philippines during a world tour. Virtually all the bishops of South and Southeast Asia gathered for the occasion, the first time many had been together in a single body. In the Philippines, whose 32 million Catholics then represented almost two-thirds of all Asian Catholics, the pope called for the church to address the social needs of countless millions of Asians and to make their concerns the church’s own.

Out of that call emerged a trans-Asia vision of church and an organization called the Federation of Asian Bishops Conferences. The federation has helped the local churches of Asia work in greater solidarity with each other as well as with the poor of their countries.

As the bishops’ federation was coming to life, the women religious of Asia and Oceania were also beginning to break down traditional national barriers. Using improved communication and transportation, they began to see they shared common goals, common missions and common experiences.

As Salesian Sr. Edna Mary Mac Donald, an executive member, tells the story, it was in the 1970s that women religious in Hong Kong first spoke out, saying their voices for justice and peace and other major issues concerning religious life and the world were not adequately being heard. They banded together and out of those efforts the group was born in 1972.

“In the same era there was a great awakening to the poverty of the people of the world,” said Mac Donald in an e-mail to NCR. “AMOR expresses the continuous search to identify religious with the materially poor of Asia and with those rich in spiritual and human values,” she said, quoting from a statement about the group written by the Asian bishops.

Added Mac Donald: “There are many concerns facing the religious of Asia and Oceania. Our priority is the promotion of justice and peace of the reign of God.”

Officially, AMOR falls under no one local church or bishop. Rather it works with local churches and bishops whenever possible, and collaborates with local apostolic nuncios.

Assumption Sr. Maria Rosa Medina, current executive secretary, is in the final stages of putting together the October gathering. As is the custom, she is working with the local national conference of major superiors -- this time, the Thai superiors -- ironing out the last details of this year’s gathering.

Looking ahead, Medina says that some “observers” will join the Thailand meeting. “They might be chosen from among the sisters, priests, brothers or laypeople, and they may fully participate except in elections,” she said. Only the host country, she explained, can have other observers “in order to allow more people to profit from the discussions and deliberations.”

The current executive committee is made up of chairperson Sister of Immaculate Heart of Mary Sompong Thabping of Thailand; Society of the Sacred Heart Sr. Gratia Kim Sook Hee of Korea; Infant Jesus Sr. Maria Lau of Singapore; Mac Donald of Australia; and Medina.

As of October 2006 there were 24 member conferences in Asia and Oceania.