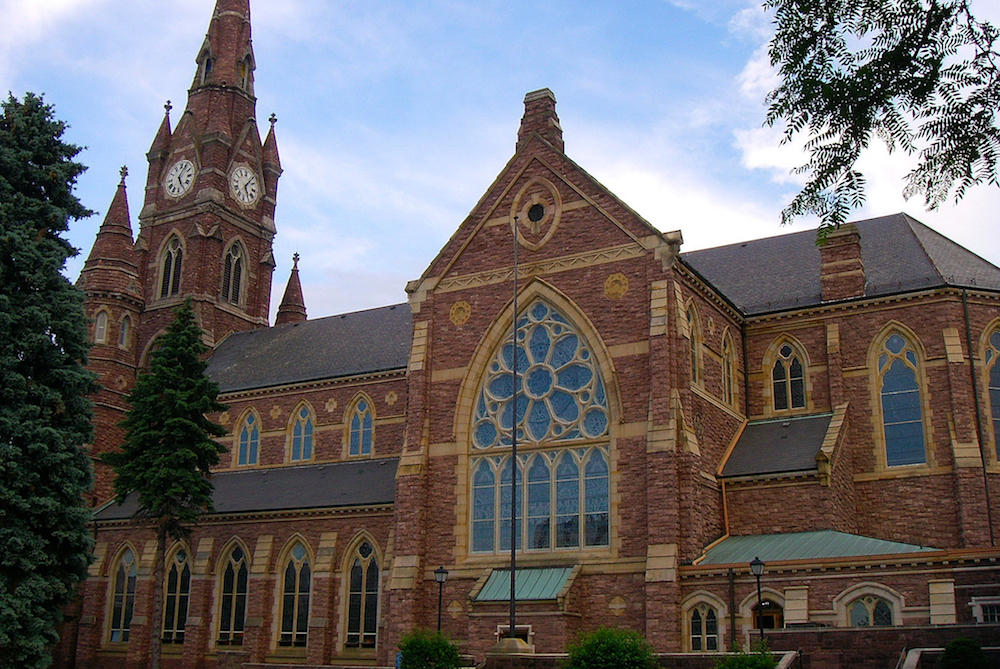 An anonymous supporter of church reform went the whole Martin Luther, pinning 21 theses on the door of St. Peter Cathedral in Erie, Pennsylvania, Sept. 13. The 21 points called for, among other items, ordaining women and increasing lay involvement in church governance.

It was a clear mimicking of the Protestant reformer's 1517 posting of 95 theses on the door of the Castle Church in Wittenberg, Germany. The Erie document is addressed to Pope Francis and written on behalf of the Catholic laity.

The style of the author is more literary than dogmatic.

The first thesis states a quote often attributed to playwright Oscar Wilde: "Everything in the world is about sex, except sex is about power."

Other points mix in laudatory praise on the church, at one point describing it as the most charitable institution in human history, while castigating abuses which "irreparably cleave the Church from the embodiment of Jesus' true essence and mission." It argues that the laity should quit kneeling and rather stand in protest, and it blames much of the sex abuse crisis on clericalism.

The document states that priestly celibacy and the church's view on sexuality "has fed its unique culture of secrecy and exclusion," creating "a cloistered, secret world of men, accountable only to one another."

"It hits the nail on the head," he said, adding that it reflects much of the discussion in Erie Catholic circles after the release of the damning Pennsylvania grand jury report and revelations regarding now-former Cardinal Theodore McCarrick this summer. He is among a handful of Erie church leaders who were mailed copies of the document. 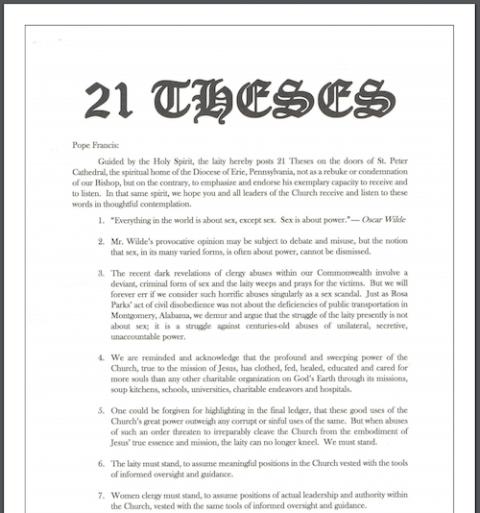 Kriegel said the author is correct in promoting more lay and women's leadership in the church. Response to publishing the theses in the parish bulletin has been overwhelmingly positive, said Kriegel, whose parish is adjacent to the cathedral parish.

The mystery of who wrote it is a topic of discussion in Erie church circles. Kriegel thinks it might have been authored by Catholic women who are educated in theology. But, he admitted, "I could still be wrong on that."

The document was also mailed to Erie Bishop Lawrence Persico. This summer, Persico forged a reputation for transparency, releasing information on priest sex abusers in advance of the volatile grand jury report.

Anne-Marie Welsh, diocesan director of communications for Erie, said Persico welcomes discussion but will not respond to the 21 theses because they were written anonymously and they call for action, such as ordaining women, that is beyond the purview of a diocesan bishop.

The last of the 21 theses argues for ongoing action. The author argues that the points raised are not intended to be infallible. They are to be seen as discussion starters and a blueprint for action.

"For the 21 Theses are not the end, but merely the beginning of a deep, unflinching, self-examination of the Church, the fruits of which can and must be realized. With haste," the author wrote.

Read this next: Exclusive: Cupich says bishops must cede authority, allow lay oversight of accusations
This story appears in the The Field Hospital feature series. View the full series.