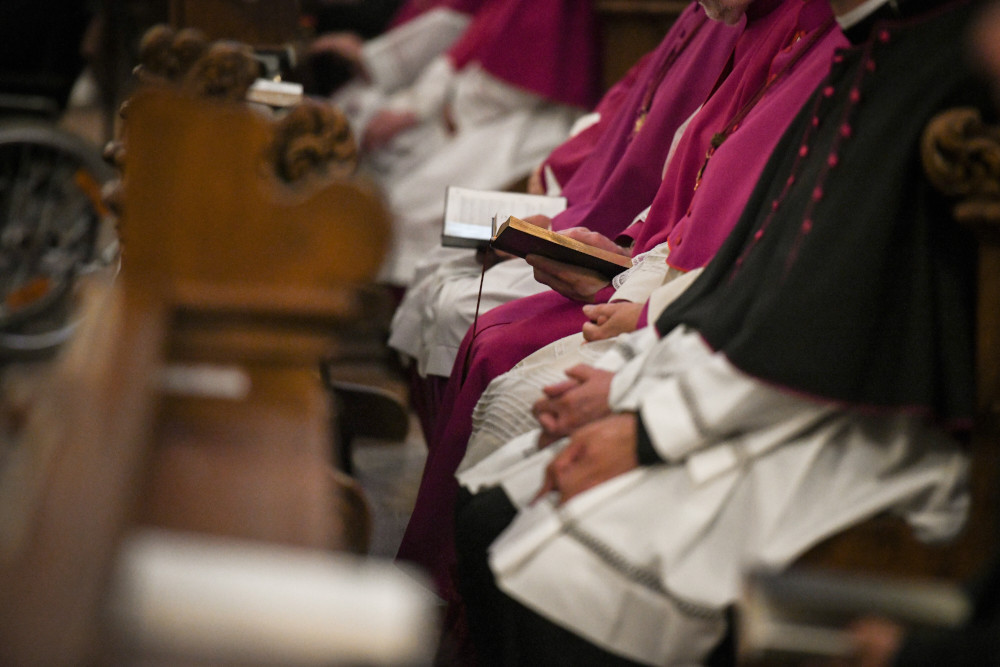 Prelates are seen during the plenary meeting of the German bishops' conference at the Fulda cathedral Sept. 26, 2019. (CNS/KNA/Julia Steinbrecht)

While the presidents came and went, the Secretary of the German Bishops’ Conference, Fr. Hans Langendoerfer, stayed on, embodying continuity at the top of the Catholic Church in Germany.

But now, after 25 years as secretary during which he served presidents Karl Lehmann, Robert Zollitsch and Reinhard Marx, Langendoerfer, one of the architects of the Synodal Path reform process, has said his he is retiring. It’s a surprise move that follows the equally surprising announcement that Marx was stepping down in March.

In 2014, when Marx was elected, the ever calm and thoughtful Langendoerfer won a bigger majority for his post than the at times impulsive president.

Langendoerfer’s announcement that he will not run for re-election means the Bishops’ Conference is on the brink of a fundamental renewal at the top, given that the deputy president, Osnabrueck Bishop Franz-Josef Bode, 69, has already said he will not run.

The changeover comes at a difficult time for the Catholic Church in Germany which has just embarked on its Synodal Path reform project to debate the future of its constitution and of parts of its doctrine. Many of the old certainties are being called into question, and conservative commentators have warned that the process could split the church or gradually turn it into a “German national church.”

Langendoerfer is one of the spiritual fathers of the Synodal Path. Ever since the discovery of sexual abuse of pupils by priests at the Berlin Canisius College in 2010, he has been troubled by the question of whether there are connections between catholic sexual morality and priestly celibacy on the one hand and sexual abuse on the other.

When the authors of the 2018 research project on sexual abuse of minors perpetrated by members of the catholic clergy in Germany recommended that the church should think about “systemic factors” behind the sexual abuse, Langendoerfer quickly embraced their ideas. It led him to seek a church forum for a fundamental debate on the issues of sexual morality, priestly existence and power-sharing in the church.

The Synodal Path bears the hallmarks of Jesuit thinking. It is in fact a synodal consultation, but without the narrow canonical legal framework of a synod. The Jesuit Langendoerfer and Marx went as far as they could in using the scope that opened up when a Jesuit assumed the papal throne in Francis.

This confirmed fears voiced by critics who saw the Bonn-based Jesuit as a sort of mastermind in the Bishops’ Conference. Langendoerfer’s habit of being cordially receptive to other views before usually refuting them with better arguments is a strength that left some opponents fuming.

He showed how adept he is at mediating in conflicts at the start of the Synodal Path in Frankfurt at the end of January. When a group of “independents” protested loudly that the statutes put them at a disadvantage, he quickly came up with a creative solution to integrate the minority, thereby averting a serious upset that could have overshadowed the meeting.

In the past 25 years, Langendoerfer has partly transformed the secretariat in Bonn, with more than 120 staff, into a kind of think tank which produces ideas (and papers) for the church in today’s world. Some bishops have grumbled that they can’t see the point in that.

But whenever a local crisis escalates into a national one, as in the Berlin abuse cases or the overly expensive residence of the bishop of Limburg, the bishops were glad to have a secretariat capable of organising an orderly line of defense and communication strategy on a national level.