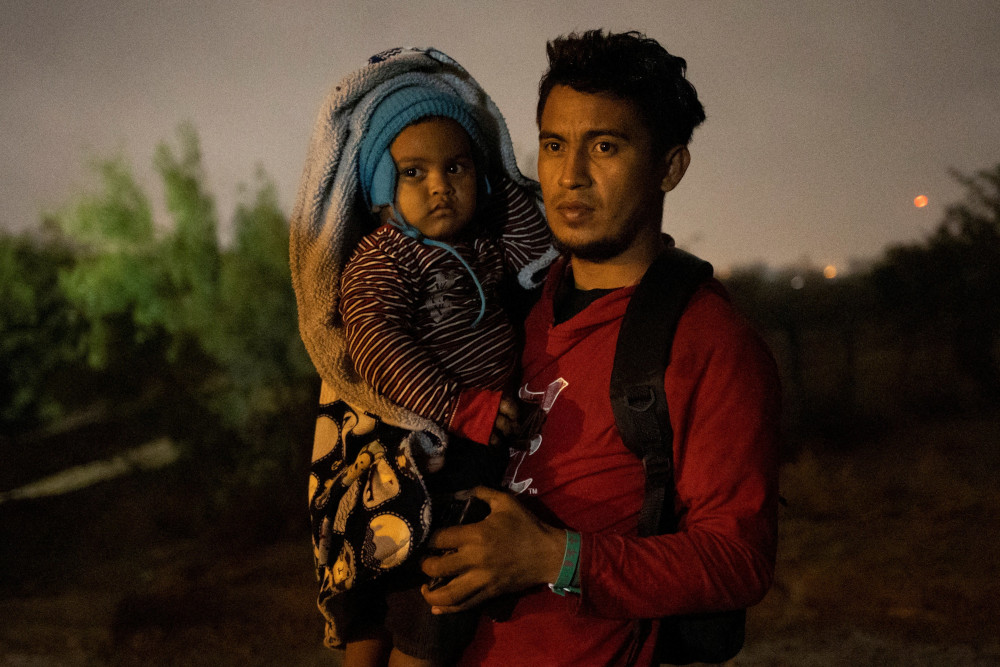 An asylum seeking migrant from Honduras, holds his 2-year-old son as he awaits to surrender to border agents after being smuggled across the Rio Grande river from Mexico into Roma, Texas, Nov. 18, 2022. (CNS photo/Adrees Latif, Reuters)

Many active war zones have been referred to as hell on earth. Former Go-Go's lead singer Belinda Carlisle scored a No. 1 pop chart hit in 1987 with a tune called "Heaven Is a Place on Earth."

But for millions around the world, they have been stuck in "camps" for so long that they've taken on the appearance of towns and small cities. Others are in detention facilities for no other reason than needing to leave the country where they'd lived all their lives; that includes, according to the New York Times, Russian dissidents now locked up in a Louisiana detention center.

Still others eke out an existence on one side or another of a multinational border, hoping that something will change, either politically or operationally, to change the limbo on earth that they are in.

U.S. policy on immigration contributes to the stasis. There is hope that Congress, in its lame-duck session, will finally pass a "Dreamers" bill to allow hundreds of thousands of young adults, who came to the United States with their families, to move about freely without risking arrest and possible deportation under the Deferred Action on Childhood Arrivals policy announced a decade ago by then-President Barack Obama.

But with Republicans set to run the House of Representatives in the next Congress, there seems little appetite for tackling that kind of legislation. As a result, the number of those in America without legal documentation has climbed into eight figures.

Meanwhile, those escaping the horrors of war in Ukraine, or who fled the Taliban takeover of Afghanistan in 2021, are welcomed into America with relatively open arms.

Ukrainians and Afghans are "perceived as not being able to arrive at the border as easily," said Stephanie Brewer, Mexico director for the Washington Office on Latin America.

Meanwhile, more people try entering the United States on foot from Mexico. They are not all Mexicans. Most come from the "Northern Triangle" countries of El Salvador, Guatemala and Honduras, after deciding they must leave due to some combination of drugs, gangs, and a lack of jobs. Still others have come from Venezuela, escaping a dysfunctional government.

Some hail from Haiti, although rarely do they arrive directly into the United States. Many Haitians, having fled poverty, earthquakes and gangs, headed to Latin America to find work, Brewer told Catholic News Service. However, with national economies in tatters due to the coronavirus pandemic, those jobs have gone away, so Haitians head north like so many others have done.

There's still a thorny problem with Title 42, which allows the United States to expel a noncitizen in the interest of public health. Those expelled aren't carrying guns or knives, the reasoning went, but they may be carrying the coronavirus.

The Biden administration wants to end the use of Title 42, instituted by his predecessor as a quick way to deny the use of asylum to those seeking it.

A federal district judge in mid-November threw out the policy. However, 15 states have since sued to seek its reinstatement.

Mexico's immigration authorities recently said it would allow Venezuelans expelled by the United States to stay within its borders. Yet Brewer cited a report issued in late November that showed that, while Mexican policy is to prevent the expulsion of children, that's precisely what's happening.

Despite "what appears to be pretty progressive protection for children," the study's authors were "finding, of course, that these norms have not been applied."

In a year that had little good news for immigrants in a nation of immigrants, there were some wins.

Temporary protected status was granted by the United States to immigrants from Cameroon and Ethiopia. The Catholic Legal Immigration Network worked with Network, the Catholic social justice lobby, in a group calling itself the Coalition Against Racism in Immigration, to convince the Biden administration to grant the TPS designation, according to CLINIC's executive director, Anna Gallagher.

Another win came in the final "public charge" rule. The Trump administration offered a new rule in 2019, replacing the 1999 version, that would have denied lawful permanent resident status to more immigrants by setting the personal wealth bar higher. But the Biden administration withdrew that rule within two months of taking office, and the final rule now looks much closer to the 1999 version than the 2019 version.

CMS issued another report in May about New York City's immigrants, who make up about 37% of the population, but 44% of the labor force and 63% of its construction workers. Of the last group, about 41% are undocumented, leaving them "especially vulnerable to exploitation and dangerous conditions," according to the report's executive summary.

CLINIC, which has its own in-house law firm to assist dioceses and religious orders bringing in immigrant religious workers from other countries, saw the number of CLINIC affiliates grow to 450 in 2022. "Half of the affiliates are Catholic," Gallagher told CNS -- a number that exceeds the total of U.S. dioceses and eparchies.

Other faith-based organizations have struck up affiliations with CLINIC, as have secular groups like libraries. "A union has an affiliate at an airport," Gallagher said. "We're growing, and we'll probably grow more!"

Gallagher noted that CLINIC was founded in 1988 in response to the federal 1986 immigration reform bill signed into law by President Ronald Reagan, and Congress has not passed another reform bill since. "We're hoping some common-sense reform soon," she said. "It's demoralizing to see that it hasn't happened."