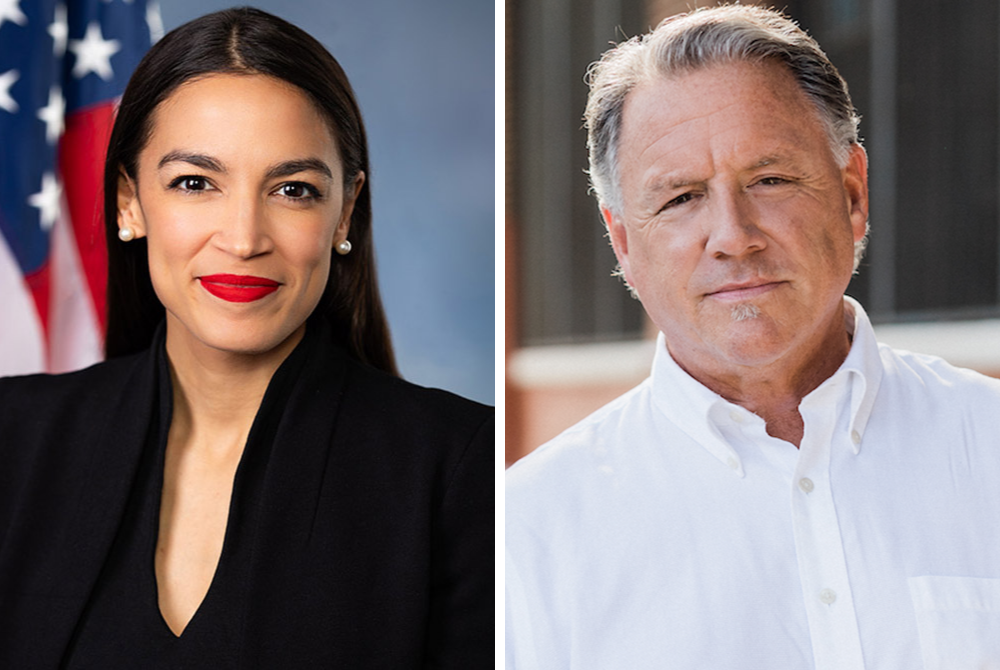 This year's battle for New York's 14th District offers a study of contrasts between two Catholics.

Alexandria Ocasio-Cortez, the incumbent, is the only freshman representative to be nationally known by her initials (AOC) and to be portrayed on "Saturday Night Live." She rode a 2018 progressive surge into unseating a longtime Democratic centrist in a primary battle, is a proponent of the Green New Deal and a frequent Twitter target for President Donald Trump.

John Cummings, Alexandria Ocasio-Cortez's Republican challenger, is a former NYPD police officer, and a teacher for 22 years at St. Raymond High School for Boys in the Bronx, his alma mater. He told NCR, playing on the idea that all politics is local, that he is focused on exploiting what he described as an underlying dissatisfaction with Ocasio-Cortez in the heavily Democratic district.

They bring two distinct viewpoints: Ocasio-Cortez, who has become a progressive icon in two short years, and Cummings, the Republican who has campaigned nearly all that time to get known in the 14th District, which comprises parts of the two New York City boroughs of Queens and the Bronx, separated by water and connected by bridges.

Ocasio-Cortez described her faith in a 2018 America article. In that Jesuit journal, she pushed for criminal justice reform, stating that as a Catholic she believes in the forgiveness of sins and that Blacks and Latinos have disproportionately suffered from punitive and unjust sentencing in the U.S. criminal justice system.

Cummings defines his faith as part of what he described as a life of service, first as an NYPD officer who retired after an on-the-job injury, and his teaching social studies at St. Raymond, a largely minority, all-boys school.

He sings in the choir at St. Frances de Chantal Church in the Throgs Neck section of the Bronx, an area, far different, and much more full of middle-class homeowners, than the movie image of the Bronx.

Ocasio-Cortez declined to speak with NCR for this article, while Cummings told NCR that, while his opponent has basked in a national spotlight, he wants this election decided on local issues.

"People feel she is looking past us to something bigger," he said. 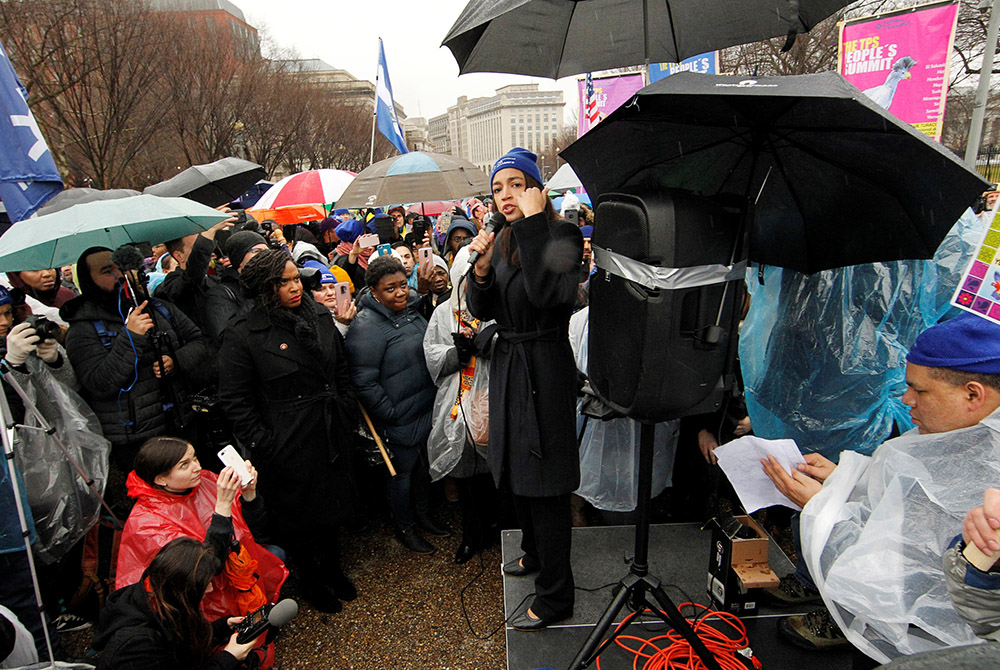 U.S. Rep. Alexandria Ocasio-Cortez, D-N.Y., addresses immigration rights activists during a rally calling for "permanent protections for Temporary Protected Status holders" in front of the White House in Washington Feb. 12, 2019. Due to a lawsuit, the Department of Homeland Security has extended TPS for El Salvador, Haiti, Nicaragua and Sudan to January 2020. (CNS/Reuters/Jim Bourg)

Cummings argued that he is better connected to the district, which is roughly 35% in the Bronx, with the rest in Queens. The district ranges from, on the Queens side, the struggling immigrant communities of Corona, which suffered massive casualties during the early days of the coronavirus pandemic, to the high-rent high rises of Long Island City. That neighborhood was once the proposed site of a giant Amazon distribution center, successfully fought by Ocasio-Cortez, who argued that it relied too heavily on government subsidies and would overwhelm neighborhood services, including mass transit. Cummings makes the case that the district needed the more than 25,000 jobs promised by the mega-corporation.

Cummings described himself as a product of Catholic schools in the Bronx, and is quick to add that Ocasio-Cortez graduated from Yorktown High School, in a suburban area 37 miles from the city.

Cummings downplayed the religious connection to the campaign. "I don't know if it's important to the race," he said about his Catholicism. And, while his email fundraising pitches offer scathing criticisms of Ocasio-Cortez's stances on the Amazon development, the Green New Deal, and her support of socialist ideas, he said he has no ill will lodged against her personally.

They met once, last year.

"She seems like a pleasant person. We just see things differently," Cummings told NCR about his opponent.

Cummings said that the people in the district are anxious about increased crime. He said that the increase in shootings in New York have frightened many and, contrary to the wishes of much of this summer's street protesters, there is little support for defunding the police. He said his potential constituents want more cops, not fewer.

He said that much of the reluctance in the district to send children back to school is not due to the coronavirus, but fear of increased crime.

"Parents are going with distance learning because they don't want their children to be on the streets," he said.

As a Republican, Cummings said he both opposes and supports the president's initiatives. The district has a large immigrant population and it went overwhelmingly for Hillary Clinton in the last election. In Trump's home borough of Queens, where the former reality television star is known best, his support is meager. The president won only a quarter of the vote there in 2016 and, in the Bronx, Clinton won more than 80 percent.

Cummings is counting on the voters in the district, including immigrants and longtime Democrats, to give him a look. He said he wants a pathway to immigration reform, but only after the borders are sealed. About half the district is Latino, and it ranks seventh in the percentage of foreign-born residents among all U.S. Congressional districts.

"They want law and order. They want to feel safe," he said about voters in the district.

There are no independent polls of sentiment in New York's 14th. Cummings said that private polls his campaign has sponsored indicate dissatisfaction with Ocasio-Cortez, with voters responding that she has let her national profile overwhelm her attention to the district.

Ocasio-Cortez is paying little attention to her opponent, a conventional political strategy of candidates expected to overwhelm a challenger. Cummings said he is looking forward to their one debate, planned for October.

On Nov. 4, he said, he hopes, "I will be the No. 2 story that day." Otherwise, he told NCR, he will have plenty of material to share with the students in his government class at St. Raymond's about what it's like to run for Congress.