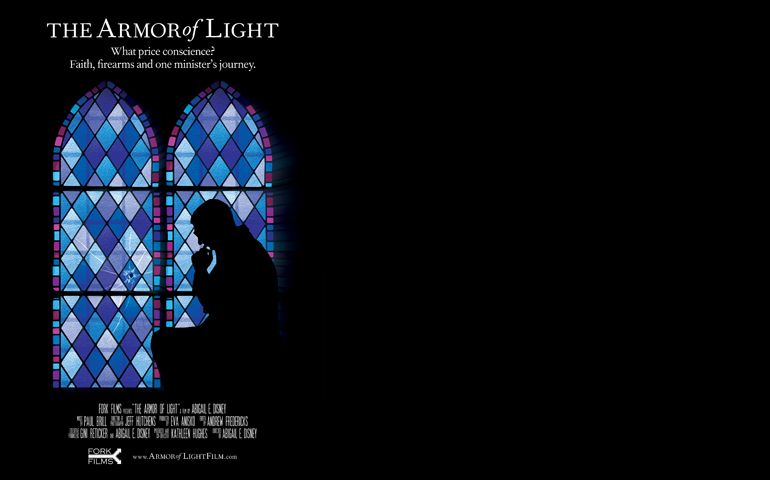 Poster for "The Armor of Light"

There are many Christians who are arming themselves because they are fearful, terribly fearful. God's people are in bondage to fear and I think we pastors, shepherds of souls should be concerned. I asked pastors where and they get their information on gun issues and most tell me Fox News or the NRA. Brothers and sisters, Fox News and the NRA are not spiritual authorities. I am concerned that the NRA promoting the idea that the best way to solve the most vexing problems in our society is to be prepared to shoot people dead. This doesn't sit well with me as a Christian moral vision over and above the Word of God. We must be very careful that in respecting the Second Amendment we don't violate the Second Commandment. You want to know what all this means (the Bible)? Love God and love the person next to you. Let us cast of vengeance and put on the armor of light.  -- Rev. Rob Schneck to the National Clergy Council in "The Armor of Light"

Award-winning producer and now director Abigail Disney, great niece of Walt Disney, has helmed a soft-spoken documentary project aimed right at the ethical and moral heart of the gun-toting American Christian community. The film evokes strong emotions as it tells about tragedy. Then it gently and persistently challenges any addiction to fear that prods people to take some kind of solace in the belief that guns and violence are a valid Christian response to that fear in today's world.

Abigail Disney does not preach; she tells the stories of two lives that encountered each other in the search for meaningful change in U.S. society. One is a conservative evangelical Republican pastor in Washington, D.C., Rev. Rob Schneck, and the other an African American mother, Lucy McBath, whose son, Jordon Davis, was shot dead at a gas station in Florida in 2012 because a man, Michael Dunn, thought he was playing his music too loud. They are on different paths but their stories reinforce the other as they lead viewers on a journey of inner discovery, like a prolonged Ignatian examination of consciousness, if you will, filled with the possibility for change.

Schneck is an ordained minister of the Evangelical Church Alliance and has been its chairman for several years. He is also the President of Faith and Action in Washington, D.C., and ministers to elected and appointed officials in the nation's capital. Schneck started his ministry as a pro-life activist in Buffalo; he began questioning the conflation of pro-life activism and violence when a doctor performing abortions was murdered and the wife accused Schneck of inciting people by his words and actions.

Lucy, who had never heard about the "Stand Your Ground" law in Florida until her son was murdered, now works with "Moms Demand Action for Gun Sense in America," a group founded after the Sandy Hook Elementary massacre in 2012.  She, her attorney-turned-gun-control-advocate John Phillips, and Schneck show that it is possible to find the courage to change one's beliefs about guns and violence in America in the face of great opposition, fear and silence.

Schneck treads carefully because by questioning the rationale for gun use by his constituency of thousands of conservatives, evangelicals and Christian pro-lifers, he knows his life could be threatened as well as his organization and his career. Yet he goes ahead with resolve. He learns to shoot a gun so he can speak from experience. He attends the NRA convention in Indianapolis with the banner "9 acres of guns and gear" and its resounding unofficial populist motto: "The only way to stop a bad guy with a gun is a good guy with a gun." When Franklin Graham, son of famed evangelist Billy Graham, leads a prayer at the NRA against registering guns, I was incredulous.

As he travels the country, Schneck meets with pastors and leaders and questions them, looking for answers:

As a Christian, as a believer, what are your feelings when I say, "Christians and guns? And I would like to put this out as a question because I think it is one Christians ought to ask prayerfully, carefully, and Biblically."

The answers are Biblically based and absolute, such as, "The Bible is clear: if a man doesn't protect his wife and kids he's worse than an infidel."

At a meeting of all male pro-life leaders in Washington, D.C., Schneck asks the men, "It has troubled me that the number of pro-lifers that have, in my estimation, jumped on a bandwagon, of very pro-gun, very pro Second Amendment -- is that a pro-life ethic?"

Troy Newman, President of Operation Rescue replies on camera in the film:

I think is absolutely is, Rob. People of conscience and people of faith have responsible gun ownership in order to protect innocent human life, more so than their own life and we need to have people in our congregations armed. You may have somebody walk in that yesterday was a perfect parishioner but they're in a fight with their wife, they're on psychotropic drugs and they're going crazy and they pull out their guns they're coming off it, and they have homicidal tendencies, and they take out their guns and say, I'm going to take out the entire church. He's only going to be able to get off about one or two rounds. It's not going to be a mass homicide or a slaughterhouse until he runs out of ammunition because the only thing that stops a bad guy with a gun is a good guy with a gun.

There is a racial element to the whole gun issue: white, conservative Christians, mostly male, are pro-gun but not so their black Christian brothers and sisters, who are so often the victim of uncontrolled firearms. It's a startling and entirely different conversation.

I interviewed director/producer/writer Abigail Disney for the film. She was raised Catholic and admits that her parents were very conservative. "But then I went to college and we parted ways. See, I was actually listening on Sunday mornings and I am still guided by the principles I learned; they are hardwired into me. It's why Rob Schneck and I are such good friends."

Disney continued, "College (Yale University) blasted my world apart. It led me on a path that felt better for me, better than sitting on boards and raising money for non-profits. I got to the point that if I didn't share the stories I was hearing to others I would explode."

I asked Disney when the gun issue got on her radar. She replied "My head has been in this gun space for even longer than I've been talking about it, as far back as my doctoral dissertation (on war novels). I am weirdly fascinated and weirdly perplexed by this country's reliance on violence and how we go to war over and over again.

I was speaking to a women's group on peace in Monterrey, Mexico, a place that has experienced so much gun violence in recent years. I remembered that I was an American woman, and 250,000 small arms flow into Mexico from Texas every year. So who am I, as a woman, to do nothing to change this destruction in the lives of these women? To challenge the culture of violence in America? I recommitted myself to speaking out.

Disney met Schneck through a friend at the Auburn Theological Society in New York and this is what led to the film.

When I asked Disney what she thinks about Christians using theology or Scripture to justify their love affair with guns and violence, she replied, "They are so sure of themselves. They frontload their theology. They have a conclusion that they then justify with theology and the Bible."

Finally, I asked her about the role of entertainment in saturating the culture with violence only as a means to solve problems. Disney said, "Entertainment is a piece of the problem because it's not just the weapons by which we export the mythology of violence solving problems. My job on earth is to push back on this. I think if you can find the pressure points maybe you can make a difference."

The film ends with Schneck speaking out at Isla Vista, Calif., in 2014 after a mass shooting there. Here he takes a definitive stand, almost alone, against gun violence in America and challenges the silence of the clergy about this ongoing tragedy.

I hope that "The Armor of Light" will get Oscar attention this coming February, along with Davis Guggenheim's "He Named Me Malala." Both are finely made documentaries that show men and women in front of and behind the cameras who tell compelling stories in compelling and meaningful ways. They are films that can inspire change, if we have the courage reflect, dialogue honestly, and act by speaking truth to power.

Culture | 'The Armor of Light': Second Amendment or Second Commandment? You choose.

Amid today's climate of violence, Jesus calls us to listen and follow him