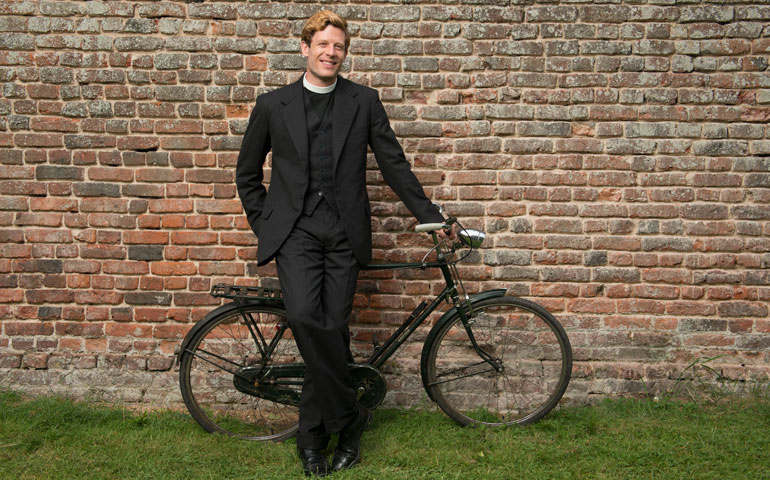 Advent, Schmadvent. Christmas will come after a few weeks of preparation, but "Downton Abbey" fans have been practicing the spiritual discipline of waiting since March. Anticipation for the British period drama is ramping up, now that the final season has already aired across the pond. Thanks to an up-to-the-minute countdown clock on the "Masterpiece" website, we can wait in joyful hope till the coming of the Crawleys on Jan. 3 here in the U.S.

I've been doing more than waiting. In fact, "Downton" was merely the gateway drug to what's become a full-blown addiction to British TV: "Sherlock," "Luther," "Vera," "Happy Valley," "Broadchurch," "Inspector Lewis," "Foyle's War" and more. I wouldn't give them up for all the tea in, well, Great Britain.

While my Netflix account is getting a workout, so are my spiritual muscles, since a number of my favorite British shows feature religious themes.

The most Catholic of these would be "Father Brown," based, of course, on the amateur sleuth-priest of G.K. Chesterton's stories. Although Chesterton's mysteries were set in the early 1900s, the new BBC version has been moved forward to the 1950s -- though not to current times, perhaps in part so the lead character can still wear a cassock.

Played by British actor Mark Williams -- best known in the U.S. for his portrayal of Arthur Weasley in the "Harry Potter" films -- Father Brown's character is that of a kindly, mild-mannered priest whose crime-solving abilities keep upstaging the local inspector. He is brilliant but also pastoral, sometimes caring more about justice than the letter of the law.

"Father Brown" has been picked up by 40 U.S. public television stations, usually broadcast on Saturday evenings during its season. It's not available on Netflix, but earlier seasons can be streamed via Amazon or Apple TV. Its fourth season began filming this past summer.

Although I know I should root for the "home team," I have to admit that my real enthusiasm is for Father Brown's Anglican counterpart, Sidney Chambers, the crime-solving vicar of last year's new BBC show, "Grantchester." It took me a while to get used to actor James Norton as a clergyman, since I had just finished watching him as a psychopathic killer in "Happy Valley."

Also set in the 1950s, "Grantchester" is a more satisfying show than "Father Brown," in part because Chambers is a complex character. A veteran of World War II, he has women troubles, loves jazz and drinks a lot of whiskey. There is the traditional cop-foil character, but also some wonderful female ones, including Chambers' cranky landlady.

Chambers is not above breaking a few commandments for the greater good, but ultimately he is searching for not only "the truth" but Truth. The crimes he solves often involve not-so-easily resolved moral issues. Each 50-minute episode ends with snippets from one of Chambers' sermons, always full of wisdom and insight.

As part of PBS' "Masterpiece Mystery," "Grantchester" was available online during its season, but the first season now is available through Amazon (free to Prime members). The second season is being filmed this fall.

If these two whodunits are a little too testosterone-filled for your liking, lovers of British TV can get a female spiritual perspective from "Call the Midwife," which NCR's own reviewer Sr. Rose Pacatte has called "well-written and superbly crafted" (NCR, Oct. 10-23, 2014). Based on the real-life memoirs of Jennifer Lee Worth, who worked as a nurse-midwife in London's West End during the 1950s, the show portrays mercy and compassion for people often driven to desperation because of poverty.

Ostensibly about birth, "Call the Midwife" is ultimately about life, its value and its hardships. The main character, Jenny Lee, leaves after Season 3, but the show still shines with its superb supporting characters, including fellow midwives, Trixie, Cynthia, Shelagh and "Chummy," and the sisters with whom they live and work. The nuns -- Anglican, not Catholic -- are portrayed as wise and compassionate, but also human. Some are cranky, and one is aging with dementia.

The award-winning show, which nearly rivals "Downton" in the ratings, doesn't hit the viewer over the head with religious themes; instead, they are woven throughout the narratives, whether through Trixie's on-and-off again romance with the local vicar, or in the nun's interactions with their patients.

The first four seasons of "Call the Midwife" are available on Netflix, Amazon and Apple TV. A fifth season is planned for 2016.

Unfortunately, similar shows in America would result in the Catholic League protesting every liturgical inaccuracy. In Britain, they ruffle few feathers.

Consider "The Vicar of Dibley," a BBC sitcom that aired from 1994-2007. Set in the peaceful small town of Dibley, the show's storyline revolved around the town's quirky characters and their female vicar -- one of the first after the Church of England opened the priesthood to women in 1992. The show is irreverent, like much British comedy, and the smart-mouthed Rev. Geraldine (played by Dawn French) loves chocolate, tells dirty jokes and is definitely looking for love -- and sex.

The show was wildly popular in England (and is now available on Netflix and Apple TV, as well as on DVD) and prompted few complaints. The 2004 Christmas special in which the vicar celebrates Mass falling-down drunk did get called "offensive" by the BBC's chief faith adviser.

Chief faith adviser? Now, there's a thought for U.S. networks, though here the job would probably involve only fielding an avalanche of complaints. When FOX tried to adapt "Vicar of Dibley" into an American version, starring Kirstie Alley, it didn't make it past the pilot stage.

A version of this story appeared in the Nov 6-19, 2015 print issue under the headline: Thank God for British TV.