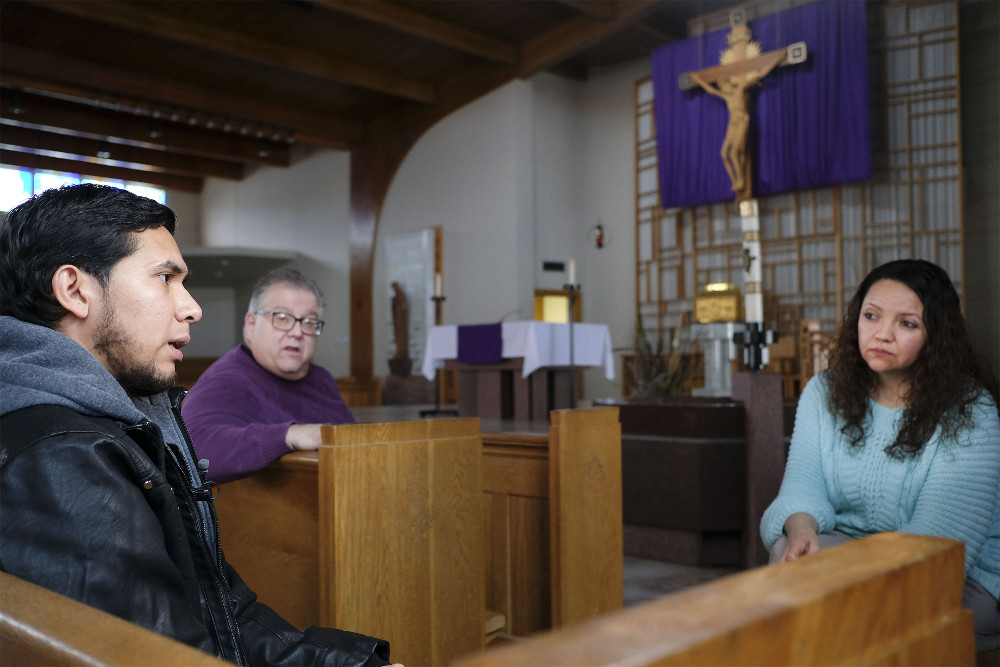 Darwin Josue Mejía Montoya, left, recounts his journey in achieving asylum in the U.S. at St. Mary Church in Storm Lake, Iowa, as the pastor, Fr. Tim Friedrichsen, and translator Araceli Reyes, listen, March 13, 2019. Montoya left his country of Nicaragua to make the arduous trek north and seek asylum in the U.S. (CNS/Jerry L. Mennenga for the Catholic Globe)

Darwin Josue Mejía Montoya could have been shot during protests in Nicaragua last year. He also could still be languishing in a detention center in Arizona, after escaping the violence.

But Montoya credits prayers — particularly to Mary — for enabling him to be one of the few individuals granted asylum in the United States from the Central American country.

Speaking through interpreter Araceli Reyes, assistant for Hispanic ministry at St. Mary Parish in Storm Lake, Montoya recalled his calmness while waiting to hear if he would be granted asylum.

"I was never nervous that day," he told The Catholic Globe, newspaper of the Sioux City Diocese. "I had previously been nervous at the other court dates, but that day, I earlier turned to Psalm 70 and just knew whatever was going to happen, I would be all right."

The youngest of six children, Montoya grew up in Boaco, Nicaragua. His parish is Parroquia de Santiago Apostol (Parish of St. James the Apostle) — where he received the sacraments of baptism, Communion and confirmation. One of the priests who served at Santiago was Fr. Sergio Antonio Alvarez Aleman, with whom "Darwin is a good friend," explained Fr. Tim Friedrichsen, pastor of St. Mary in Storm Lake and Sacred Heart in Early.

"Padre Sergio is now the pastor at Santa Lucia," Friedrichsen said of his church's sister parish. "I met both Padre Sergio and Darwin when I first visited Nicaragua in January of 2016."

Montoya would join Friedrichsen and Sergio on some of their day trips three years ago.

"Darwin did the same when I visited again in January of 2018," Friedrichsen said. "We have been Facebook 'amigos' since 2016."

Following his high school graduation, Montoya studied computer engineering and got a job at a diocesan Catholic school.

"During this time, I did a lot of service work," he said. "I joined the Association of the Miraculous Medal and we evangelized in the rural areas." He ultimately became president of the group and learned more about the struggles people were experiencing.

He started working for a cellular company, which encouraged employees to peacefully protest the recent taxation and social security policies of President Daniel Ortega.

"I was never into politics, but a memo was sent out and everyone was asked to participate on behalf of the company," he said. "Within three days, seven or eight people were killed."

The violence escalated and about 40 people were killed, he added, noting that he was threatened by paramilitary personnel, who held a gun to his head and promised they would kill him at the peaceful demonstration.

"I imagine I was targeted because I was wearing the work badge of the company. We would travel to our accounts, not even protesting, and saw armed police," Montoya continued.

By this time, Montoya estimated more than 1,000 juveniles were missing.

"I was living with my mother and my aunt and supporting them financially," he said. "They were concerned for my life and the threat associated with my job."

Montoya had considered a move to Costa Rica but realized life would not be better in that Central American nation.

"A friend of mine had a brother in the U.S. who could help us gain entry," he said, adding that it never crossed his mind to enter the country illegally.

Montoya shared his plans with Friedrichsen, who advised him not to come because the trip was long and too dangerous. But Montoya made the journey to Mexico anyway with the clothes on his back, a small bag of items and a Miraculous Medal around his neck. He and a friend arrived in Nogales, Mexico, at a port of entry, and asked for asylum. They ended up in a detention center in Eloy, Arizona, about 100 miles from the border.

Friedrichsen wrote letters and worked with lawyers to facilitate Montoya's case while the young man went through several lawyers during his stay at the detention center and prayed the rosary every day. 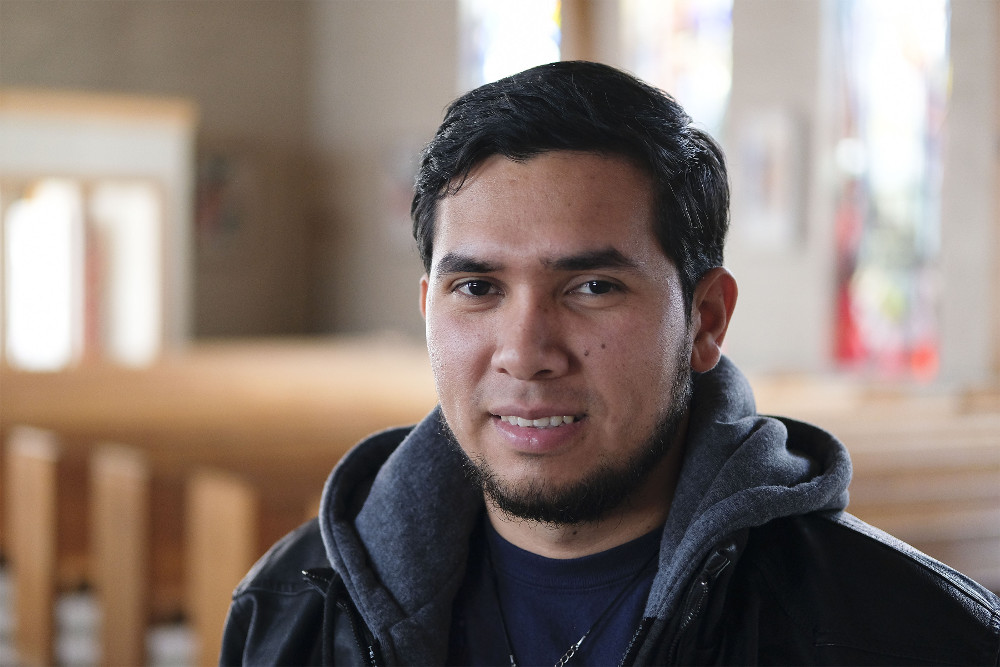 He had numerous meetings and court dates that resulted in no decision or postponement. On the Jan. 22 court date, he had spent six months and five days in detention.

"That day, a miracle of God and Our Lady took place," Montoya said, noting that when he was granted asylum, "even the lawyers were surprised."

With tears in his eyes, the priest said he was happy his friend was safe. He also said he was glad Montoya didn't follow his advice and stay in Nicaragua.

"This ordeal has weighed heavily on my heart and mind, as do the ordeals of so many who will not be as fortunate as Darwin has been," Friedrichsen said.

Montoya now calls Storm Lake home and is beginning the process of getting a Social Security number, a job and taking English classes.

When asked about the biggest adjustment, Montoya, wearing blue jeans, a T-shirt, a black leather jacket and his Miraculous Medal, shivered and said: "The cold."