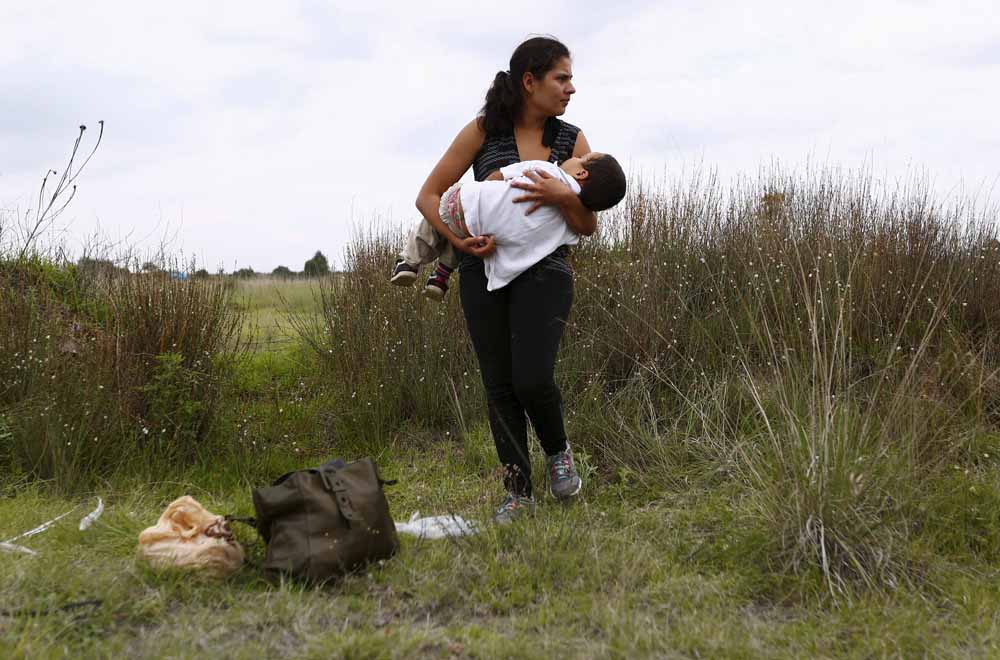 A Salvadoran immigrant en route to the United States carries her son while standing in vegetation June 1, 2015, to hide from organized crime bands in Huehuetoca, Mexico. (CNS/Reuters/Edgard Garrido)

The stakes could hardly be higher for immigrants who seek asylum in the U.S. out of fear of being tortured, killed or otherwise persecuted if they are forced to return to their home countries.

But attorneys, religious leaders and advocates report increasing obstacles in the already difficult process of applying for protection, obstacles some say are intentionally created by the Trump administration in an effort to use border security, immigration detention and the court system to restrict this form of legal immigration.

Members of the Trump administration, including Attorney General Jeff Sessions and Department of Homeland Security Secretary Kirstjen Nielsen, have referred to "loopholes" in the asylum system that need to be closed.

"The country has a right to have an orderly process for people who cross the borders," El Paso Bishop Mark Seitz told NCR. "But what we're doing is everything in our power to turn them away before we've even heard their story."

Like refugees, people eligible for asylum cannot remain in their home countries due to a well-founded fear of persecution for their race, religion, nationality, membership in a particular social group or political opinion. But instead of being pre-approved for admission before they travel to the U.S., asylum seekers apply for the status when they are already in the country or seeking admission at a port of entry.

Immigrants who express a credible fear of persecution in their home countries are legally required to be admitted to the U.S. while they apply for asylum.

Meanwhile, when people arrive at U.S. borders from countries that have some of the highest homicide rates in the world and are controlled by "narco-trafficking" gangs who act with impunity, "we somehow are applying a different standard when they ask for asylum and claim that they're fleeing for their lives," Seitz said.

"They want to stop legal immigration, and unfortunately they're having some success."
—Dylan Corbett, director of the Hope Border Institute

Applying for asylum has never been easy. Immigrants aren't provided with attorneys to represent them during the complicated process and often suffer from trauma-related mental health issues.

However, recent moves by the Trump administration to increase border security and detention and make the court system harder to navigate successfully are making things even more difficult.

President Donald Trump's recent decision to deploy National Guard troops to the border, framed as a response to the threat of newly arrived migrants — who are increasingly minors, families and other asylum seekers — is one example, Corbett said.

"You send armed forces to places where they are going to encounter enemy combatants," said Seitz. "All that our soldiers will find down here are mothers and children and poor people who are in large measure fleeing an unlivable situation, a place where their own lives have been threatened. They are no threat to the United States."

Abuses on the border are only one part of what the Hope Border Institute called "the iron triangle of deterrence" in a January report, Sealing the Border, which argues that the border, detention and the court system are "weaponized" against asylum seekers in the El Paso area. Corbett explained that the report has broad implications because that area of Texas is often used for "beta testing" of policies that are eventually formalized and expanded.

For example, when his organization documented the detention of pregnant women, immigration officials insisted the cases were isolated — until Immigration and Customs Enforcement formalized the policy of detaining pregnant women March 29.

"Abuse is becoming streamlined," said Corbett, who cited cases of pregnant women receiving inadequate medical care and even having miscarriages in detention.

Detaining pregnant women is part of a general trend of detaining more asylum seekers instead of letting some pursue their cases from outside detention. Increased detention is particularly concerning because conditions are sometimes inhumane, the Sealing the Border report says; mental and physical health care are especially inadequate.

In one case cited in the report, a journalist seeking asylum opted to self-deport after his shoulder was dislocated during a transfer to another detention center. An American Civil Liberties Union lawsuit filed March 15 alleges that prolonged detention is intended to encourage asylum seekers to drop their claims and to deter others from coming.

"A few times we've tried to get medical experts into a jail to evaluate scarring on our clients in order to create testimony for court," Pistone said, "and yet the jail wouldn't allow the physicians to come in with any medical equipment."

Pistone, who directs Villanova Law School's Clinic for Asylum, Refugee, and Emigrant Services, also said that family separation seemed to be increasing and that it appears to be "a way to deter people from pursuing claims."

Department of Homeland Security officials say they separate families not as a matter of policy or a form of deterrence, but when they are unable to verify family relationships or when parents are being criminally prosecuted.

However, Pistone is not the only one skeptical of this claim. The American Civil Liberties Union announced March 9 that it was filing a lawsuit to end the widespread if unofficial practice of family separation, while the Homeland Security Inspector General John Kelly in April announced he would investigate family separation at the urging of a coalition of Democratic senators.

Adding to suspicions is the fact that, according to the Sealing the Border report, a Border Patrol representative told the Borderland Immigration Council in October 2017 that the agency had a policy of separating children age 10 or older from their parents, although the agency quickly backtracked that statement.

The administration's rhetoric also makes some suspect that animus toward asylum seekers is the real motivation.

When speaking of "legal immigration and our obligations under international and federal law," Trump and other officials "use the language of loopholes, as if [asylum seekers] are exploiting something," Corbett added, saying the policies are clearly "about dissuasion or discouragement."

It's unreasonable "to talk about people as if they're trying to go through loopholes when they're really just trying to seek safety for themselves and their families and trying … to get through a system that's just so difficult and so ridiculous to try to navigate by yourself," said Liz Willis, program manager for the Asylum Seeker Advocacy Project (ASAP).

Willis pointed out that Sessions recently paused the Vera Institute of Justice's Legal Orientation Program, which provides advice to immigrants in detention, to see if it was cost-effective. The Vera Institute works with the government to improve justice systems and the Justice Department concluded in 2012 that the orientation program saved the government almost $18 million each year.

Seitz said that even though immigration judges and ICE have said the Vera Institute program was helpful, "The administration seems determined to put everyone in the same category. If they cross the border we've decided that they are unworthy to even have a hearing, to make a case that they should be able to stay according to international law."

Sessions has also mandated that immigration judges meet quotas in the number of cases they process each year. His actions "really take away judicial integrity and, I think, access to justice," Pistone said, explaining the quotas could lead to cases getting "pushed through the system on an assembly line" with no "individualized justice."

Pistone also worried about Sessions' intervention in Board of Immigration Appeals decisions, which he is allowed to review and overturn. Sessions has already vacated a decision that said judges couldn't close asylum cases based on the initial application without granting the applicant a full trial.

According to Willis, asylum seekers often aren't able to find a lawyer before they fill out their application, which has to be completed in English and includes legal questions. Sessions' decision "goes against the idea of having a full and fair hearing before a decision is made in your case, especially when the stakes are as high as deportation to a country where you fear death," she said.

Sessions is also reviewing other cases, at least one of which relates to using domestic abuse as a basis for asylum claims.

Advocates are trying to convey "the importance of the law that's been developed … to protect asylum seekers who are here fleeing that kind of violence," Willis said, "so I hope that in the end he doesn't decide to change any of the law regarding domestic violence."

Corbett's hopes are not high that the administration will reverse its current trajectory of making things more difficult for asylum seekers. "I'm just really worried, with the growth of these agencies under this administration, with the growth in their budget and not a concomitant push for transparency and accountability, that it's just going to be a spiral downwards," he said.

However, Seitz pointed out that the situation does not have to remain as it is. "We know that a border can be a healthy place," he said. "It has to be a place that allows people to cross, both with documents and, in situations of emergency, without documents."

The church will continue to speak out about immigrants' rights, Seitz added.