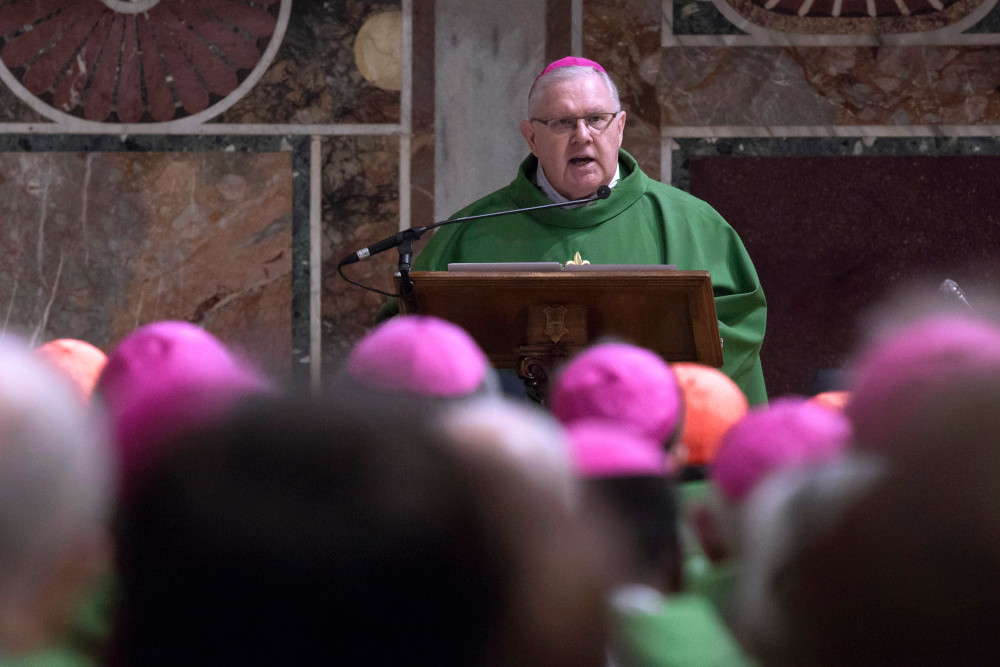 Archbishop Mark Coleridge of Brisbane, president of the Australian bishops' conference, gives the homily during a Mass at a meeting on the protection of minors in the church at the Vatican in this 2019 file photo. A new national protocol for responding to historical child sexual abuse and any new allegations in the Catholic Church in Australia will be both more compassionate and just, Coleridge said Jan. 28, 2021. (CNS photo/Maria Grazia Picciarella)

A new national protocol for responding to historical child sexual abuse and any new allegations in the Catholic Church in Australia will be more compassionate and just, said Archbishop Mark Coleridge, head of the Australian Catholic Bishops' Conference.

The new framework to be implemented Feb. 1 is intended as a national benchmark, forming a consistent approach for Catholic authorities and entities in investigating, compensating and providing ongoing care for people alleging child sexual abuse and for survivors of such abuse.

Calling it "an important step forward," Coleridge said the new protocol "offers a trauma-informed approach to supporting those who have been betrayed in church settings," while it "demands an approach from the church that is compassionate and just."

"It also insists upon respect for each individual's personal story and circumstances," he said.

The bishops' conference formally adopted the protocol last November following two years of consultation — including with survivors and their advocates — within and outside the church.

It also draws upon the recommendations of the Royal Commission into Institutional Responses to Child Sexual Abuse.

The new protocol will replace the church's current two protocols, Towards Healing and The Melbourne Response, although these will continue to be in use until the end of the year or the conclusion of matters currently being managed.

Karen Larkman, director of the Archdiocese of Sydney's Safeguarding and Ministerial Integrity Office, welcomed the change. She said it would "provide a consistent, trauma-informed response within the Catholic Church in Australia to survivors of abuse, as well as further promoting a culture of preventing harm to children and adults at risk of harm."

"Importantly, it puts in place a process of transparency and continual improvement for ongoing care for survivors of abuse," she added. "This really is a significant step forward, and we feel very positive about the future of safeguarding in the church and its accompaniment of survivors."

Coleridge acknowledged that the current protocols had been criticized "in large part because of inconsistent or incomplete application" and said the church continues to work hard to strengthen the safeguards that have been put in place in more recent years.

As well as outlining principles and processes for responding to concerns and allegations of abuse, whether historical or contemporary, the new protocol also offers guidance on how to engage with those affected by abuse, he said.