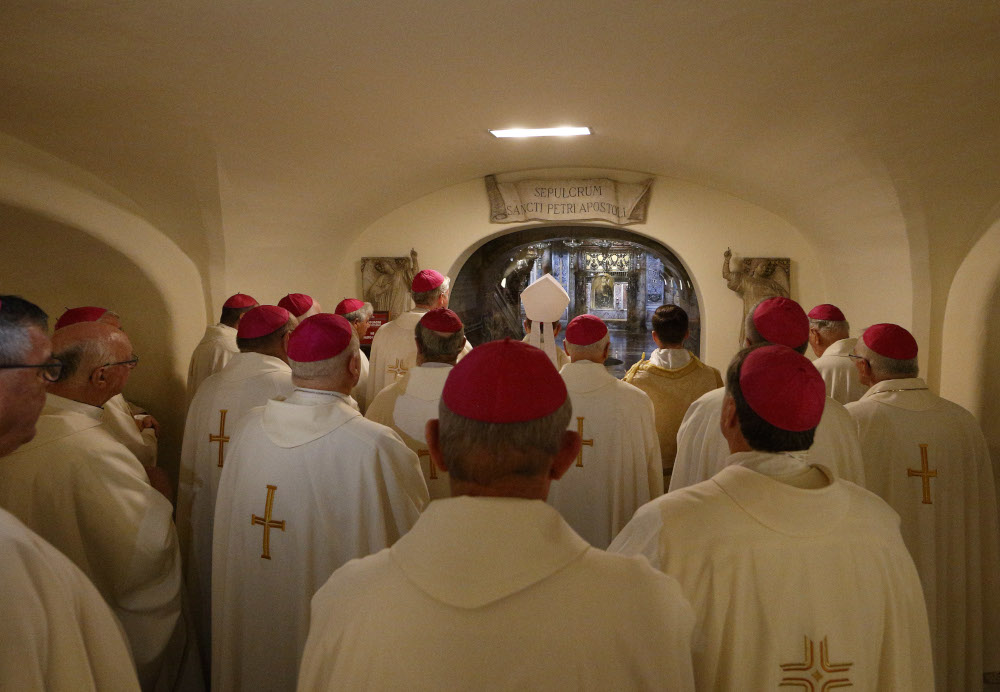 Australian bishops pray at the tomb of St. Peter after concelebrating Mass in the crypt of St. Peter's Basilica at the Vatican June 24, 2019. The bishops were making their "ad limina" visits to the Vatican to report on the status of their dioceses. (CNS/Paul Haring)

The president of the Australian bishops' conference told his fellow bishops that it is "a time of humiliation" for Catholic Church leaders, but he is convinced that God is still at work.

As church leaders continue to face the reality of the clerical sexual abuse crisis and attempts to cover it up, "we as bishops have to discover anew how small we are and yet how grand is the design into which we have been drawn by the call of God and his commissioning beyond our betrayals," said Archbishop Mark Coleridge of Brisbane, conference president.

After a weeklong retreat near Rome, the bishops of Australia began their "ad limina" visits to the Vatican with Mass June 24 at the tomb of St. Peter and a long meeting with Pope Francis.

The 38-member group included diocesan bishops, auxiliary bishops, the head of the ordinariate for former Anglicans and a diocesan administrator.

Coleridge was the principal celebrant and homilist for the Mass in the grotto of St. Peter's Basilica marking the formal beginning of the visit.

The "ad limina" visit is a combination pilgrimage — with Masses at the basilicas of St. Peter, St. Mary Major and St. Paul Outside the Walls — and series of meetings with Pope Francis and with the leaders of many Vatican offices to share experiences, concerns and ideas.

The visits traditionally were required of bishops every five years, but with the increased number of dioceses and bishops around the world that is no longer possible. The last "ad limina" visit of the Australian bishops took place eight years ago with Pope Benedict XVI.

Pope Francis no longer meets with each bishop individually and no longer delivers a speech to the entire group. Instead, he spends 90 minutes or more with each group, answering their questions and offering advice when asked; the Vatican releases only photographs and a list of the bishops who were present.

His meeting with the Australian bishops reportedly lasted about two hours.

Auxiliary Bishop Richard Umbers of Sydney tweeted afterward that it was a "brilliant audience" and very encouraging. "We spoke about everything and the Holy Father responded with such great pastoral wisdom. A true 'incontro' and accompaniment of the Australian bishops."

Archbishop Peter Comensoli of Melbourne tweeted that it was "an extraordinary 2.5-hour conversation, brother to brothers. It is hard to put into words – spiritually intense, deeply honest, pastorally astute, free and frank. Wow."

A statement from the bishops' conference said the Australians raised "a number of topics that are of deep concern to the Catholic Church in Australia," including "the church's work to eliminate child sexual abuse and to accompany survivors of abuse; the bishops' desire to support and minister to aboriginal and Torres Strait Islander peoples; the hopes for the plenary council; and the need to find new ways of witnessing to Jesus Christ in Australian society in a time of change."

"There was an ease and a fraternal warmth in the way Pope Francis spoke and an attentiveness in his listening to the questions the bishops asked," the statement quoted Coleridge as saying.

Archbishop Anthony Fisher of Sydney, conference vice president, said the meeting with Pope Francis was "moving and deeply encouraging" and showed that "the Holy Father clearly understood our situation in Australia. It was a real moment of grace."

Bishop Charles Gauci of Darwin, the most recently ordained of the Australian bishops, said he was "deeply impressed" by Pope Francis' "humanity, his compassion, his sense of collegiality, his passion for working with all the people of God in a synodal church and his true commitment to the Gospel."

In his homily before meeting the pope, Coleridge told his fellow bishops that "it is a time for humiliation to give birth to humility." He prayed that St. Peter — "the Galilean fisherman," who betrayed Jesus, was forgiven and given the mandate to feed his sheep — would "be our companion and guide on the journey."

Celebrating the feast of the Body and Blood of the Christ June 23 with his fellow bishops in the chapel of the Domus Australia, Archbishop Anthony Fisher of Sydney also looked at the impact of the abuse scandal on the bishops and on where they must find Christian hope.

Like the disciples who did not know how to feed the crowds gathered around Jesus in the Gospel, "Today the bishops tell the Lord that feeding this mob is beyond them and suggest he sends them away," Fisher said.

"Jesus responds by telling them to give it a go, with whatever is left in their tanks. He takes the little they offer and supplies the rest that is needed," the archbishop said. The result is that there is "enough, more than enough, superabundance: twelve basketsful of leftover graces, one for each apostle and his successors."

"It's precisely when we are at our lowest ebb that the triumph of grace is most evident," he said, adding that in the Archdiocese of Sydney "the numbers attending our annual Corpus Christi procession through the streets keeps growing, despite pressures to drive the church into obscurity."

And, he said, "at the very time that human reasoning counts against any sane man giving his life to this rickety show, my seminary is the fullest it has been since it was rebuilt in the 1990s."