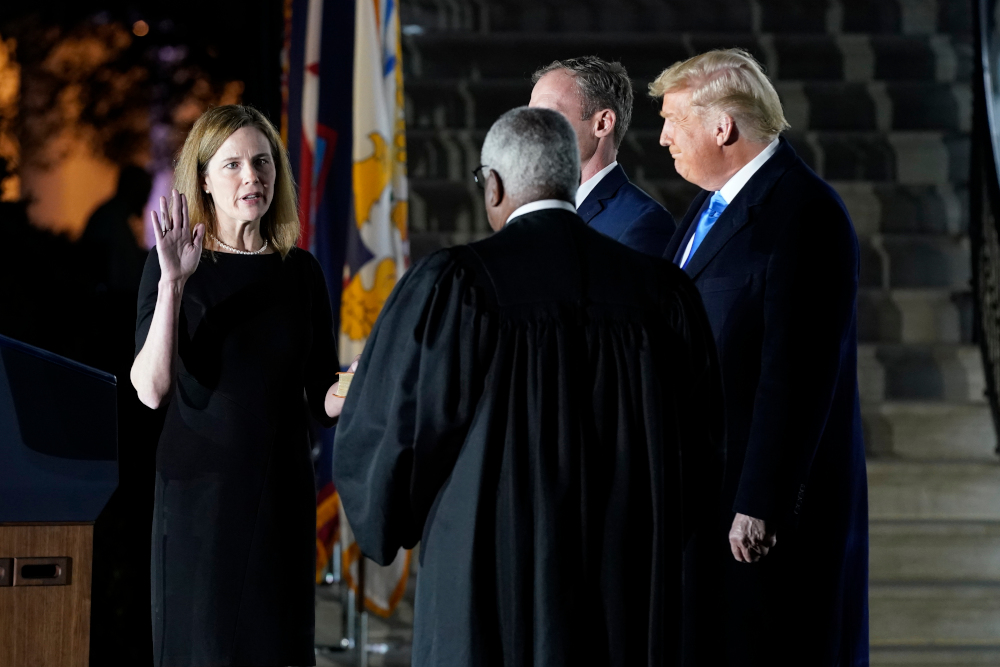 President Donald Trump watches as Supreme Court Justice Clarence Thomas administers the Constitutional Oath to Amy Coney Barrett on the South Lawn of the White House in Washington, Monday, Oct. 26, 2020, after Barrett was confirmed by the Senate earlier in the evening. (AP/Patrick Semansky)

Amy Coney Barrett was confirmed to the Supreme Court late Oct. 26 by a deeply divided Senate, with Republicans overpowering Democrats to install President Donald Trump's nominee days before the election and secure a likely conservative court majority for years to come.

Trump's choice to fill the vacancy of the late liberal icon Ruth Bader Ginsburg potentially opens a new era of rulings on abortion, the Affordable Care Act and even his own election. Democrats were unable to stop the outcome, Trump's third justice on the court, as Republicans race to reshape the judiciary.

Barrett, 48, will be able to start work Oct. 27, her lifetime appointment as the 115th justice solidifying the court's rightward tilt.

"This is a momentous day for America," Trump said at a primetime swearing-in event on the South Lawn at the White House. Justice Clarence Thomas administered the Constitutional Oath to Barrett before a crowd of about 200.

Barrett told those gathered that she believes "it is the job of a judge to resist her policy preferences." She vowed, "I will do my job without any fear or favor."

Monday's vote was the closest high court confirmation ever to a presidential election, and the first in modern times with no support from the minority party. The spiking COVID-19 crisis has hung over the proceedings. Vice President Mike Pence declined to preside at the Senate unless his tie-breaking vote was needed after Democrats asked him to stay away when his aides tested positive for COVID-19. The vote was 52-48, and Pence's vote was not necessary.

"Voting to confirm this nominee should make every single senator proud," said Senate Majority Leader Mitch McConnell, fending off "outlandish" criticism in a lengthy speech. During a rare weekend session he declared that Barrett's opponents "won't be able to do much about this for a long time to come."

Barrett, a federal appeals court judge from Indiana, is expected to take the judicial oath administered by Chief Justice John Roberts in a private ceremony Oct. 27 at the court to begin participating in proceedings. 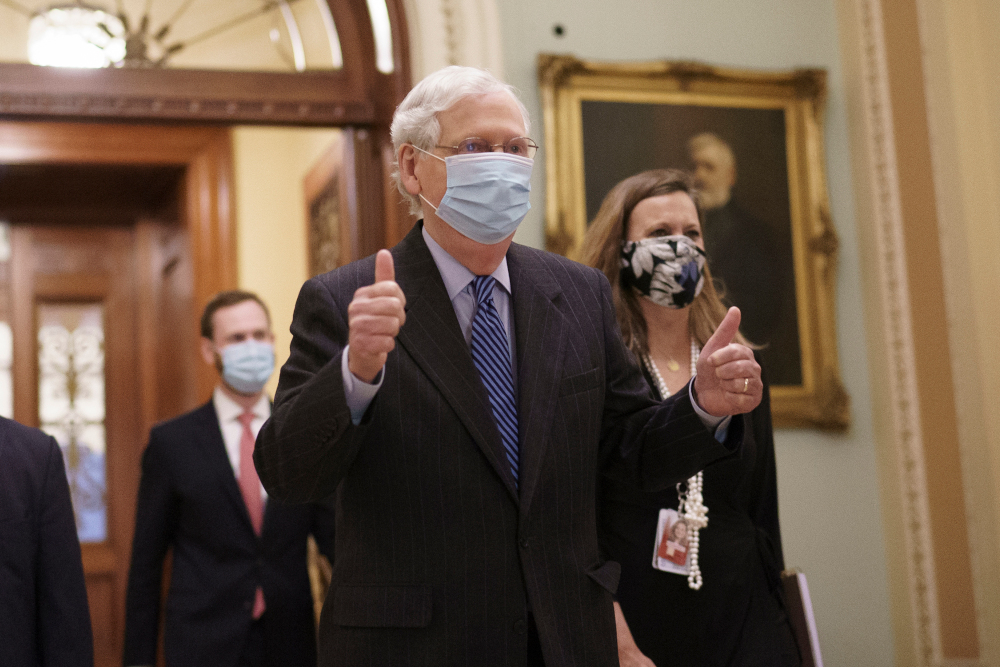 Underscoring the political divide during the pandemic, the Republican senators, most wearing masks, sat in their seats as is tradition for landmark votes, and applauded the outcome, with fist-bumps. Democratic senators emptied their side, heeding party leadership's advice to not linger in the chamber. A Rose Garden event with Trump to announce Barrett's nomination last month ended up spreading the virus, including to some GOP senators who have since returned from quarantine.

Pence's presence would have been expected for a high-profile moment. But Senate Democratic leader Chuck Schumer and his leadership team said it would not only violate virus guidelines of the Centers for Disease Control and Prevention, "it would also be a violation of common decency and courtesy."

Democrats argued for weeks that the vote was being improperly rushed and insisted during an all-night Sunday session it should be up to the winner of the Nov. 3 election to name the nominee.

Speaking near midnight Sunday, Sen. Elizabeth Warren, D-Mass., called the vote "illegitimate" and "the last gasp of a desperate party."

Several matters are awaiting decision just a week before Election Day, and Barrett could be a decisive vote in Republican appeals of orders extending the deadlines for absentee ballots in North Carolina and Pennsylvania.

The justices also are weighing Trump's emergency plea for the court to prevent the Manhattan District Attorney from acquiring his tax returns. And on Nov. 10, the court is expected to hear the Trump-backed challenge to the Obama-era Affordable Care Act. Just before the Senate voted, the court sided with Republicans in refusing to extend the deadline for absentee ballots in Wisconsin.

Trump has said he wanted to swiftly install a ninth justice to resolve election disputes and is hopeful the justices will end the health law known as "Obamacare."

In a statement, Democratic presidential candidate Joe Biden tied Barrett's nomination to the court to the Republican effort to pull down the Affordable Care Act. He called her confirmation "rushed and unprecedented" and a stark reminder to Americans that "your vote matters."

During several days of public testimony before the Senate Judiciary Committee, Barrett was careful not to disclose how she would rule on any such cases.

She presented herself as a neutral arbiter and suggested, "It's not the law of Amy." But her writings against abortion and a ruling on "Obamacare" show a deeply conservative thinker.

Sen. Lindsey Graham, R-S.C., the chairman of the Judiciary Committee, praised the mother of seven as a role model for conservative women. "This is historic," Graham said. 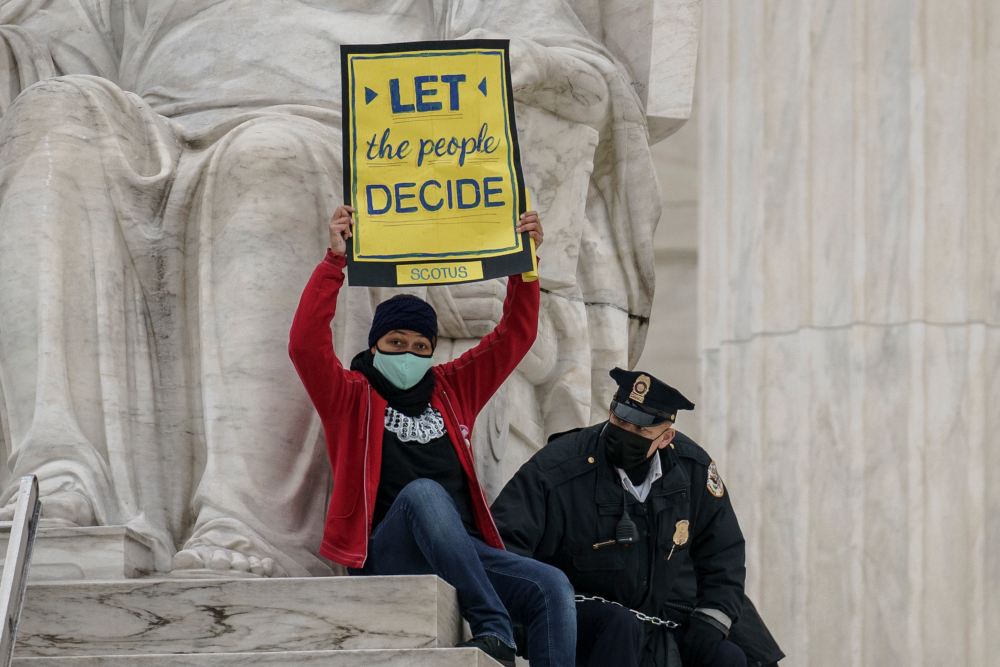 A protester opposed to the Senate's race to confirm Amy Coney Barrett is removed by police after chaining themselves to a railing and holding a sign while sitting atop the statue Contemplation of Justice, at the Supreme Court building in Washington, Sunday, Oct. 25, 2020. (AP/J. Scott Applewhite)

At the start of Trump's presidency, McConnell engineered a Senate rules change to allow confirmation by a majority of the 100 senators, rather than the 60-vote threshold traditionally needed to advance high court nominees over objections. That was an escalation of a rules change Democrats put in place to advance other court and administrative nominees under President Barack Obama.

Republicans are taking a political plunge days from the Nov. 3 election with the presidency and their Senate majority at stake.

Only one Republican — Sen. Susan Collins, who is in a tight reelection fight in Maine — voted against the nominee, not over any direct assessment of Barrett. Rather, Collins said, "I do not think it is fair nor consistent to have a Senate confirmation vote prior to the election."

Trump and his Republican allies had hoped for a campaign boost, in much the way Trump generated excitement among conservatives and evangelical Christians in 2016 over a court vacancy. That year, McConnell refused to allow the Senate to consider then-President Barack Obama's choice to replace the late Justice Antonin Scalia, arguing the new president should decide.

Most other Republicans facing tough races embraced the nominee who clerked for the late Scalia to bolster their standing with conservatives. Sen. Thom Tillis, R-N.C., said in a speech Monday that Barrett will "go down in history as one of the great justices."

But it's not clear the extraordinary effort to install the new justice over such opposition in a heated election year will pay political rewards to the GOP.

Demonstrations for and against the nominee have been more muted at the Capitol under coronavirus restrictions.

Democrats were unified against Barrett. While two Democratic senators voted to confirm Barrett in 2017 after Trump nominated the Notre Dame Law School professor to the appellate court, none voted to confirm her to the high court.

In a display of party priorities, California Sen. Kamala Harris, the Democratic vice presidential nominee, returned to Washington from the campaign trail to join colleagues with a no vote.

No other Supreme Court justice has been confirmed on a recorded vote with no support from the minority party in at least 150 years, according to information provided by the Senate Historical Office.