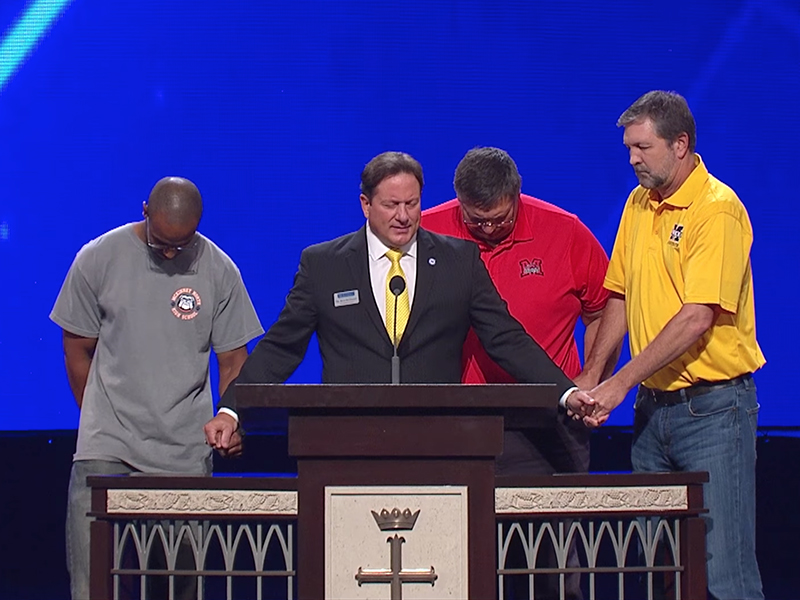 Public school officials in one of the nation's fastest-growing cities are being accused of violating the separation of church and state.

The controversy has been simmering in this once-tiny cotton-farming community, about 30 miles north of Dallas, since last summer when Rick McDaniel, superintendent of the McKinney Independent School District, prayed at a pulpit adorned with a Christian cross — during a mandatory school employee meeting at a church.

Last month, under pressure from concerned parents, the 24,500-student school district decided to end a decade-plus practice of conducting high school commencement ceremonies at the same church, Prestonwood Baptist, a Southern Baptist megachurch in nearby Plano.

The change outraged Prestonwood Pastor Jack Graham, one of President Trump's evangelical advisers and a former president of the Southern Baptist Convention.

"It appears religious freedom is under attack at the McKinney Public Schools," Graham said in a Twitter post. "It was our refusal to remove the cross from view that created this cowardly decision."

In a follow-up post, Graham added, "Just wondering on what planet a church,synagogue, or mosque would be expected to cover its religious symbols to host a public school graduation."

And in another tweet, the pastor alleged that school administrators had "yielded to the pressure of atheist groups and their supporters."

McDaniel's prayer drew the ire of the Wisconsin-based Freedom From Religion Foundation, which demanded that the school "temporarily cover iconography" to keep graduation ceremonies secular.

Its co-president, Annie Laurie Gaylor, said in a statement after the school district's decision: "We are pleased that the school has moved its graduation to a secular location rather than attempt to modify a house of worship into a place that appears secular. The district's decision to change its tradition to protect its students' rights of conscience is anything but cowardly."

Across the nation, church-state clashes like the one in McKinney "are happening more and more," said Charles Haynes, founding director of the Newseum Institute's Religious Freedom Center in Washington, D.C.

"As we grow more religiously diverse in the United States and people are more visible from various religious groups that have long been here but have not been visible, we are being called in these communities to live up to the First Amendment for the first time in many cases," said Haynes, co-author of "Finding Common Ground: A Guide to Religious Liberty in Public Schools."

Haynes said that if a cross or crosses were visible during a public graduation ceremony, that wouldn't necessarily be wrong or unconstitutional. But the church can't require a cross to be visible, nor require students to listen to a pastor.

"Religious freedom isn't a local church putting conditions on a public school using its facility and making sure its cross is visible," Haynes said. "That's the opposite of religious freedom, and that's exactly what the First Amendment is intended to prohibit."

School district spokesman Cody Cunningham said in a statement that there were "a variety of reasons including proximity, availability, attendance capacity and convenience" for moving the graduation events to the secular Allen Event Center in a neighboring suburb.

"In addition to proximity, McKinney ISD acknowledges the fact that parents and community members have expressed opposing views on the appropriateness of holding graduations in a religious facility," Cunningham said. "More recently, the public debate over the venue intensified to a level that would likely have caused a distraction at the commencement ceremonies.

"While community members are entitled to their own opinions on the issue," he added, "graduation is not an event to be used as a platform for religious or ideological debates, but rather a time to celebrate and honor students."

Just since 2000, McKinney has more than tripled in size, hitting an estimated population of nearly 180,000. Last year, it ranked as the third-fastest growing city in America among communities with populations of 50,000 or more, according to the U.S. Census Bureau.

In 2014, Money magazine named McKinney as the No. 1 best place to live in the U.S., saying, "Underlying McKinney's homey Southern charm is a thoroughly modern city."

Seven years ago, in search of a community friendly to his Christian values, James Blanchet moved his family from Southern California to McKinney. When a cashier at a local Target store told him to "Have a blessed day," he felt like he had found it.

Blanchet, the father of a high school senior, said Christianity seems to be under increasing attack in some quarters.

But the software sales professional said he has no problem with moving McKinney's commencement ceremonies to a secular location.

"If they wanted to hold the graduation at a non-Christian place of worship, I wouldn't feel comfortable with that," he said at a Starbucks near the busy intersection of U.S. highways 380 and 75. "I do see both sides of it.

"So, in the scheme of things, is it a big deal? No. You've got to pick your battles."

McKinney school officials declined to comment on the controversy, and the district spokesman would not discuss reports of an intolerant environment in the schools.

Two McKinney public middle school teachers resigned last month after they posted anti-gay and anti-Islamic tweets. Twitter messages were discovered in which the teachers referred to Islam as a "satanic death cult," an "evil ideology" and a "political ideology … (that) cannot assimilate," according to the Dallas-Fort Worth chapter of the Council on American-Islamic Relations.

At a meeting last month, Farah Uddin, a Muslim mother, urged the school board to accept diversity training offered by groups including CAIR and the Gay and Lesbian Alliance of North Texas.

Uddin noted that the school district's "Vision, Mission &amp; Beliefs" statement says, "Everyone has an inherent value and deserves to be treated with dignity and respect."

"But with recent developments, I feel we are not following this belief," Uddin told the board. "Some students have recently come out and reported that teachers within the ISD have been engaging in racist and discriminatory behaviors toward certain students in the classroom. As a result, these students are hiding their identity out of the fear of being bullied because of their race, religion, gender or sexual orientation."

Kate Parker, a mother of two McKinney students, describes herself as agnostic.

The former public school art teacher said she has helped organize an informal, interfaith group of parents — including Christians, Jews, Muslims, atheists and agnostics. The group has pressed the school board for more inclusivity and sensitivity toward students of all faiths or no faith.

Too often, Parker said, teachers have placed Christian crosses and Bible verses on school walls, prayed aloud in classrooms and said things like, "The answer to all your big questions is God."

"It's about making sure every kid … feels comfortable and included at school," Parker said in an interview at Filtered, a craft coffeehouse just down the street from the Collin County Courthouse in downtown McKinney.

"Obviously, the focus has a lot to do with separating church and state and making sure that McKinney ISD is in compliance with the law," she added. "But for the group of us who have all been interested and talking with the district about this, the real overreaching umbrella is about inclusion."

However, other parents worry that something special will be lost by moving the commencement ceremonies away from the church.

Heather Harrison said she attended graduation for two nieces and a nephew at Prestonwood Baptist. Each event was special, Harrison said, "especially because God's presence was there."

"I feel like it's another step to moving everything toward more secular," the mother of two said. "But I know Texas is a popular place. People move here from all different backgrounds, and so you don't just have one belief in Texas.

"You have all kinds of people that come together," she added. "So, I see where people could have an issue with it if you weren't a Christian. … But it makes me sad."