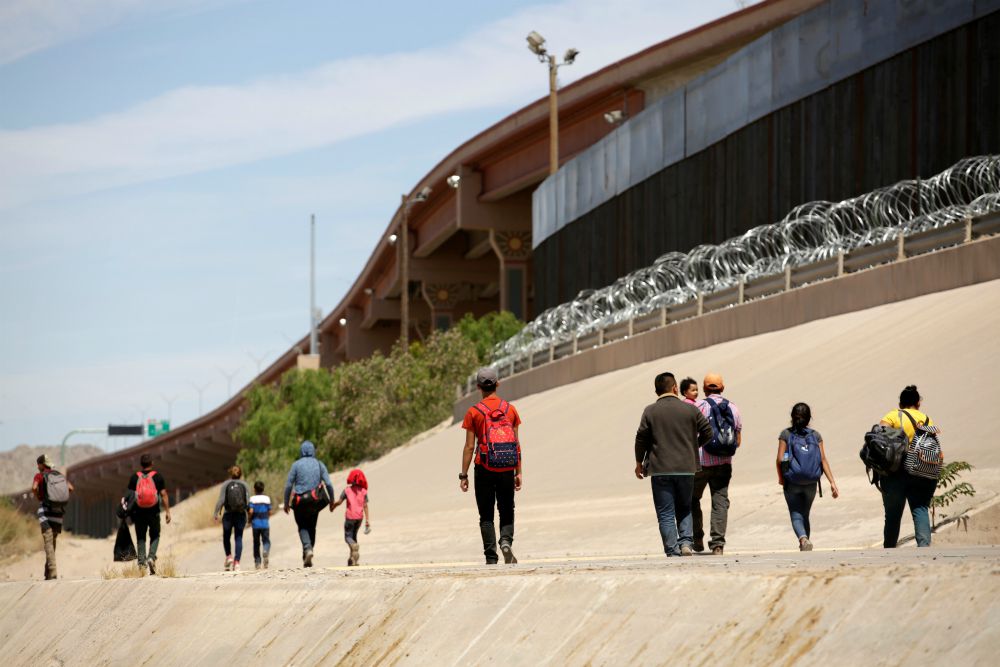 Migrants walk after crossing the Bravo River at the border line between Ciudad Juarez, Mexico, and El Paso in Texas, U.S., as seen from Ciudad Juarez, May 9. (CNS/Reuters/Jose Luis Gonzalez)

As President Donald Trump threatens imminent deportation of "millions of illegal aliens who have illicitly found their way into the United States," teams of San Francisco Bay Area volunteers are gearing up to head to El Paso, Texas, to bring tangible support to persons caught in the migration chaos at the Mexico-U.S. border.

The grassroots project has clearly tapped into the "upset and anger" about treatment of refugees and asylum seekers and "a desire for some way to do something," said Annette Lomont, co-organizer.

A member of San Francisco's St. Ignatius Parish, Lomont said the unnamed program was inspired after she shared an NCR report on the humanitarian crisis with other members of the parish's Solidarity Committee, which focuses on refugee and immigration issues.

"I was asked to look into how we might help," said Lomont, a former chair of the NCR Board of Directors.

"I contacted the volunteer coordinator at Annunciation House and the rest is history," she wrote in an email to NCR, alluding to the El Paso-based non-profit that has ministered to "migrant, refugee, and economically vulnerable peoples of the border region through hospitality, advocacy and education" for more than four decades, reports its website.

In recent times, Annunciation has been overwhelmed, primarily with Central American and Mexican asylum seekers and migrants, most having been released from U.S. custody.

On some days, a thousand persons have sought help from Annunciation, leaving the organization's founder, Ruben Garcia, 70, scrambling for space and resources including the lease of a warehouse "about the size of a Costco, 125,000 square feet," reported The Washington Post.

A friend and neighbor of Lomont's, Judy Reuter, who is a parishioner at nearby St. Agnes, is helping to coordinate the volunteer effort. A Sunday bulletin volunteer appeal at Jesuit parishes St. Ignatius and St. Agnes has generated dozens of inquiries, Lomont said.

Word spread. Soon responses were being received from other San Francisco congregations and organizations, she said.

A member of San Francisco's St. James Episcopal Church, Petrina Grube, was among them.

"This is an all-hands-on-deck situation," said Grube, a Spanish teacher at an independent K-8 school and active in the Faith in Action Bay Area network, "a network of congregations and community leaders working to ensure that the dignity of all people in our community is upheld," states its website. "This is something valuable to do, and we can see for ourselves what is going on, get a better idea of the realities of Central American and Mexican refugees at the same time we attempt to serve them in some concrete way."

Grube will head the volunteer delegation scheduled to fly to El Paso on July 13.

Teams will include a minimum of 10 members, half of whom are to be Spanish-speakers, and they will serve for seven days, an agreement established between Annunciation and the San Francisco group, explained Lomont.

Annunciation usually requires two-week volunteer commitments but waived the stipulation in light of the high number of persons who speak Spanish.

Based on her past work with migrants under duress, Lomont said the groups' competence in Spanish "is very, very important" because it facilitates "opportunities for the migrants to tell someone their story."

"When I've reached out to fellow parishioners and to friends about their interest in helping at the border, their response is almost always the same: 'I want to do something. I'm so upset and angry,' " said Lomont.

Fluent in Spanish, Bonfiglio hopes to travel with a team in the fall.

"This offers something very concrete. It represents the strong sense of justice and rejection of injustice in our community, and it is a kind of package deal," he said. "There is a great deal of gratitude on the part of the people who are planning to go."

The volunteers are responsible for their own airfare. Annunciation provides housing although volunteers can secure their own.

Among concerns and challenges, Lomont said, staying healthy while volunteering at Annunciation House.

"Most of the migrants are sick from their time in what they call the icebox," she said. "When they first arrive at the border, they are put in a holding cell where the temperature is very low. They all come out of it with colds and coughs."

On their return, volunteers "will have an opportunity to process their experience with others who have gone to the border" during follow-up sessions, Lomont said, adding that participants are being encouraged to "keep a diary of their experiences."