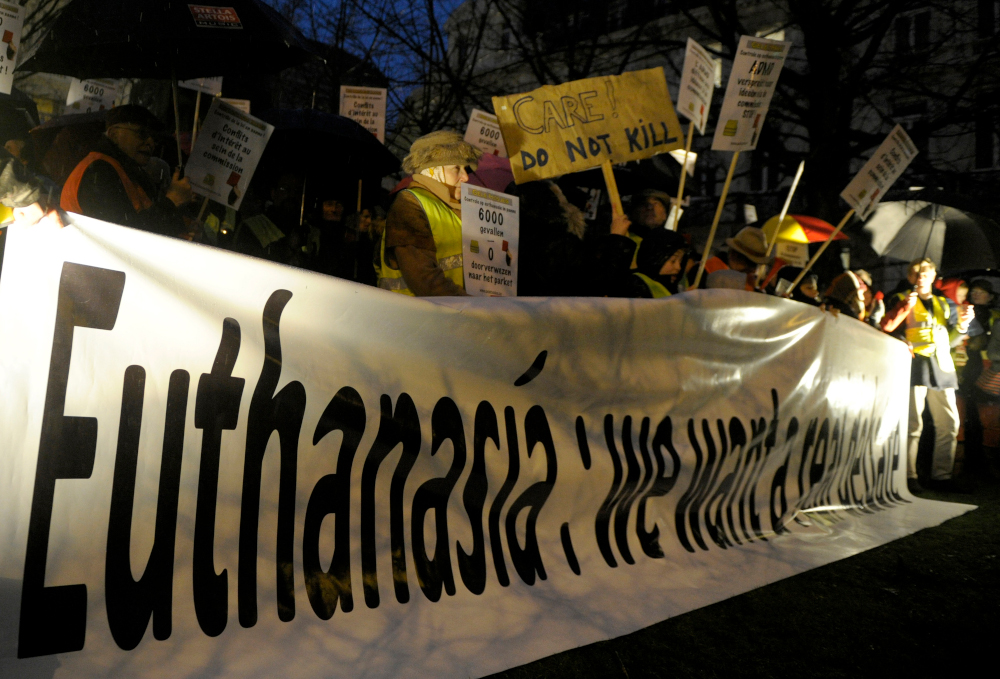 Protesters hold a banner and placards as they demonstrate against a euthanasia law in Brussels in this file photo. The Vatican has stripped 15 Belgian homes for psychiatric patients of their Catholic status because euthanasia was permitted on their premises. (CNS/Reuters/Laurent Dubrule)

Belgium's Brothers of Charity have cut ties with their 15 homes for psychiatric patients after the Vatican stripped the institutions of their Catholic status because euthanasia was permitted on their premises.

Brother Rene Stockman, superior general of the Brothers of Charity, the order that founded the homes, said May 5 the brothers had "no choice but to remain faithful" to their "charism of charity, which cannot be reconciled with the practice of euthanasia on psychiatric patients."

The centers were managed by the Provincial Association of the Brothers of Charity.

The Congregation for the Doctrine of the Faith ruled that the pro-euthanasia position of the Provincial Association of the Brothers of Charity was incompatible with church teaching on the inviolability of human life. Because the association has refused to reverse its policy on euthanasia, the doctrinal congregation was left with "no choice" but to order the homes to cease to identify as Catholic institutions.

The Brothers of Charity were informed of the Vatican decision in a letter co-signed by Cardinal Luis Ladaria Ferrer, doctrinal congregation prefect, and Archbishop Giacomo Morandi, doctrinal congregation secretary. The letter, dated March 30, emphasized that the ruling was the result of "the total refusal" to follow church teaching.

In March 2017, the association announced it would harmonize practice with the 2003 Belgian law on euthanasia, which now permits the killings of patients with "unbearable" psychiatric conditions.

The policy conflicted with both the public position on euthanasia of the brothers and also of the Belgian bishops, and the association was asked to change it but refused.

In June 2017 Stockman appealed to the Vatican to intervene to reverse the association policy, and the Vatican opened an investigation.

According to the doctrinal congregation letter, there were "numerous meetings" between the parties from June 2017 to July 2019, with the Vatican — citing the teachings of St. John Paul II and Pope Francis in particular — made clear the church held euthanasia to be an "inadmissible act." The letter said the Vatican asked for written assurances that the association accepted the "unacceptability of euthanasia."

The association consistently and publicly rejected appeals to conform to the wishes of the brothers and the Vatican. The association ignored, for instance, a motion passed by the general chapter of the brothers in July 2018 upholding the "sacredness and the absolute respect of all human life, from conception to natural death" and requiring "every brother, associate member, and others associated with the mission of the congregation to adhere to the doctrine of the Catholic Church on ethical issues."

The letter to the brothers said Auxiliary Bishop Johannes Hendriks of Haarlem-Amsterdam, whom the Vatican sent to Belgium as apostolic visitor, also failed to register any progress with the association.

The decision to divest the homes of their Catholic status will inevitably reduce the historic activities of the brothers in the care of psychiatric patients.

The Brothers of Charity was founded in 1807 in Ghent, Belgium, with a charism especially to serve the elderly and the mentally ill.

The group is today considered the most important provider of mental health care services in the Flanders region of Belgium, serving 5,000 patients a year.