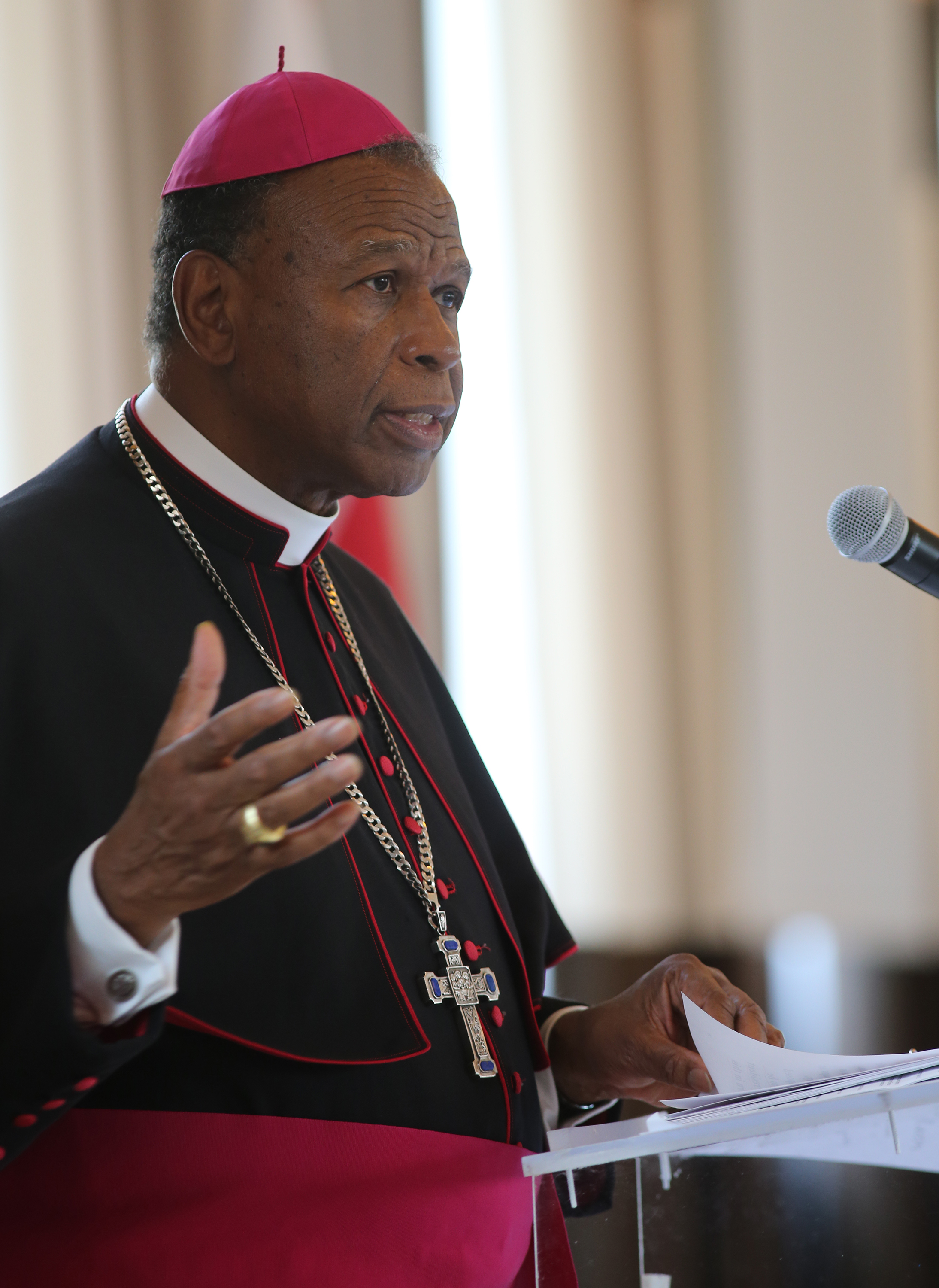 Every person "must do something," whether big or small, to address racism in the United States, Bishop Edward K. Braxton of Belleville, Illinois, told an audience at The Catholic University of America.

From taking a public stance at a rally to reaching out to a neighbor, racism can be addressed and overturned, the bishop said during a presentation at a Sept. 21 "teach-in" on fighting racism sponsored by the university's National Catholic School of Social Service.

"We must expand the horizon of possibilities to ourselves by listening, learning, thinking, praying, acting," he said.

Recalling that Catholics in public life and leaders in the U.S. Catholic Church once supported slave ownership and widely denied the civil rights of enslaved African-Americans early in the country's history, Bishop Braxton said much remains to be accomplished to heal the sin of racism and the "flaw at the foundation" of past teaching.

He pointed to a series of events, including the killing of black men by white police officers in places such as St. Louis, the rise in white supremacy and even the language of President Donald Trump, who did not specifically call out white supremacists after clashes during rallies and counterprotests Aug. 11 and 12 in Charlottesville, Virginia.

"I believe first of all we must open our hearts to the Holy Spirit and the healing grace of true conversion," the bishop told more than 200 students, faculty and professional social workers. "We must start with ourselves, our families, our neighbors, our parish, our co-workers, our school, our community and not become a part of the conspiracy of silence.

The bishop offered the audience a brief review of church history regarding racism, saying Catholics and the Catholic Church are not above reproach. He noted that the U.S. Supreme Court opinion in the 1857 Dred Scott case affirming the right of slave owners to take enslaved people into the Western territories of the then burgeoning United States was authored by Chief Justice Robert Taney, a Catholic.

He also quoted writings from Pope Paul III (1534-1546) and Pope Pius IX (1846-1878), both of whom maintained that slave trading and ownership were not contrary to divine law. He said countries influenced by Catholicism such as Spain, Portugal, France and England were leading agents of the slave trade.

In the U.S., he said, Archbishop John J. Hughes of New York (1842-1864) addressed the growing abolitionist movement in 1854, reflecting the concerns of Irish Catholics who feared they would be forced to flee the city, to the detriment of the church, if emancipated Africans headed northward.

"'Those involved in the abolitionist movement are up to nothing but dangerous mischief,'" Bishop Braxton quoted Archbishop Hughes as writing. "He took the view that the church's basic stance concerning slavery (was) that so long as slavery was legal in the South, owning slaves is not a sin, but it would not be good to treat them in a harsh way."

He asked, "Is there a flaw at the foundation? Could it be that at the very beginning of the racial divide in the post-Civil War era, there were individuals who simply did not see the need to have the bright light of the Gospel shining on their decisions about the fate of free human beings, made in the image of God, who were enslaved?"

Bishop Braxton expressed hope that the pastoral letter on racism being drafted by the U.S. Conference of Catholic Bishops will be embraced throughout the U.S. church and become a teaching document for all Catholics. He said the bishops' 1979 pastoral on racism, "Brothers and Sisters to Us," was intended to address the racial divide but was never fully implemented.

"We must continue our efforts where we can have hope toward the publishing of the pastoral letter to undo a century and more of shameful, painful history," he said.

The bishop also said he was unsure whether he agreed with the call to remove monuments to Confederate leaders, many of which were erected during the civil rights movement of the 1950s and 1960s. Instead, he suggested, that perhaps it may be appropriate to add monuments or other symbols at those sites telling the "full story" of the individual or event being depicted including their ties to slavery. Monuments for African-Americans may also be appropriate at such locations, he said.

"We can't rewrite history. We must acknowledge it and never repeat it," said the bishop, who has written and spoken widely on racism in the Catholic Church and wider society.

Prior to Bishop Braxton's presentation, the teach-in heard from a panel of social workers and social justice advocates. Their message: challenge institutional racism wherever it exists so that people on the margins gain dignity and respect.

Representatives of Pax Christi USA, Washington agencies DC Rape Crisis Center and Bread for the City, and White Awake, an advocacy organization enabling white engagement on racism, stressed to the students that racism is entrenched in many of society's institutions.

They concurred that those who are in charge of the country's leading institutions, primarily white Americans, work under rules that are meant to maintain their power and leadership to the detriment of people of color, the poor and those on society's margins.

"What I am suggesting is that every system in the United States certainly never had, did not intend to be protective of people of color," said Sister Chappell, a member of the School Sisters of Notre Dame de Namur and who has led the organization's anti-racism campaign.

She argued that that racism and implicit bias is instilled in society's institutions "through enactment of laws, policies, procedures and practices" that reinforce the power of whites over others.

Indira M. Henard, executive director of the DC Rape Crisis Center and a graduate of the university's social work school, urged the gathering to become allies for justice, keeping their worked centered on people in need and to question procedures that harm human dignity.

"Ally is not a noun, it is a verb. It is action. It requires a movement," Henard said. "Do not expect to be taught. Take it upon yourself to use the tools available to you to learn about the history of the struggle you are engaging in."