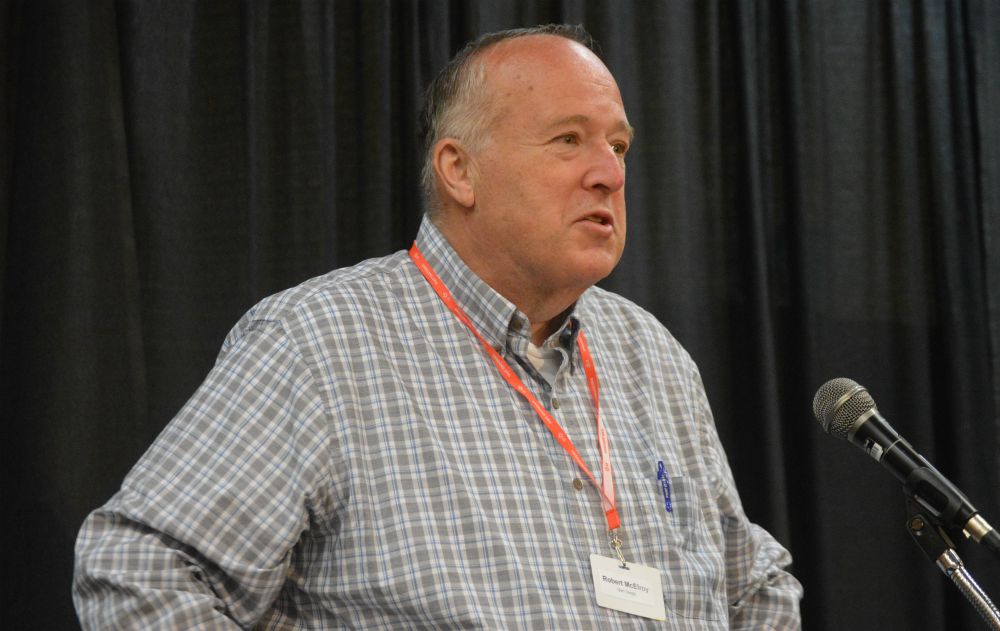 The "lived reality of men and women and children and families" and their "sufferings and challenges and joys" are at the center of "a moment of explicit theological renewal that will contribute enormously to the spread of the Gospel in this new millennium," said San Diego Bishop Robert McElroy in a June 26 keynote address.

That understanding of the "emerging pastoral theology" delineated and promoted by Pope Francis "both links us to the pastoral action and ethos of the Lord himself" and is "highly attuned to the challenges and culture of the 21st century," McElroy told participants at the annual assembly of the Association of U.S. Catholic Priests (AUSCP) held June 25-28* in Albuquerque, New Mexico.

"The pastoral theology of Pope Francis," he said, "rejects a notion of law which can be blind to the uniqueness of concrete human situations, human suffering and human limitation."

The bishop drew an audible reaction from the more than 200 AUSCP participants when he said that while opponents of "elements of the pastoral mission of Pope Francis" often argue that "doctrine cannot be superseded by the pastoral," it is "equally important to recognize that the pastoral cannot by eclipsed by doctrine."

"And pastoral authority is as important as philosophical authenticity or authenticity in law contouring the life of the church to the charter which our Lord himself has given us," he said.

An active participant in floor discussions at U.S. bishops' national gatherings, McElroy was introduced to applause as "a truly Vatican II priest and Francis bishop."

During the mid-June U.S. Conference of Catholic Bishops' meeting in Fort Lauderdale, he was among bishops who pushed for wholesale changes or replacement of the conference's quadrennial guide to Catholics on how to approach election issues, "Forming Consciences for Faithful Citizenship."

He and others argued that the document as it exists does not adequately incorporate the social justice teachings of Francis nor address current events "that traumatize us as a country," in his words.

"Pastoral Theology for a Post-Modern World"

Still, after introductory remarks in Albuquerque, McElroy began his formal presentation saying, "We are living in a wonderful moment in the life of the church."

"The authentic renewal of the Second Vatican Council remains the foundation and the challenge for those who seek to deepen the theology of the church and bring it into the life of the world," he explained.

"The call of Pope John Paul II for the church to constantly witness to Christ and the challenge of Pope Benedict to confirm the truth in an age of relativism guide the Catholic community in its discernment and its action. The call to missionary discipleship frames the vocation for every Christian woman and man."

According to McElroy, the "emergence of this pastoral theology in the present pontificate bears a striking resemblance to the renewal of theology in the years preceding the Second Vatican Council."

"The church must always be enmeshed in the real lives and sufferings and challenges and joys of the people of God and the whole of humanity."

As examples, he cited post-World War II "movements of intense theological richness," including advances in Scripture studies, recovery of "the historic liturgical life of the church" and "the sustained reflection on the nature of the church as a font for the deepening of contemporary sacramental celebrations."

These were part of "a broad theological inquiry that allowed the bishops of the council to reflect upon the challenges of the church in the modern world armed with robust insights central to the proclamation of the Gospel in the 20th century."

Growth today "of a comprehensive pastoral theology" parallels "the flourishing of ecumenical and moral theology in the post-conciliar period," he argued, "and the continuing expansion of the church's social doctrine formed with a truly global church."

However, the bishop said, "in a very real way the pastoral moment that we are witnessing today … is different from any of these prior theological renewals, for each of them took place within a recognized field of specifically theological reflection."

"The challenge of pastoral theology is not only to delineate the substance of its insights … but also the challenge to demonstrate that it is a significant branch of theology at all."

McElroy judges that it is. Pastoral theology "calls for pastoral action to take its rightful place in framing the life and belief of the universal church in concert with the traditional theological enterprises of dogma, scriptural studies, moral theology, ecclesiology, liturgical and spiritual theology."

Historically, he pointed out, pastoral theology "emerged as a major element of the reform of the priesthood and ecclesial life" following the Reformation, was viewed as "a derivative branch of theology" and "was envisioned as primarily the work of priests."

The pope's outlook on pastoral theology "demands that all of the other branches of theology attend to the concrete reality of human life and human suffering in a much more substantial way in forming doctrine," he said.

This "demands that moral theology proceed from the actual pastoral action of Jesus Christ," he continued, "which does not demand a change of life but begins with an embrace of divine love, proceeds to the action of healing, and only then requires a conversion of action in responsible conscience."

For Francis, he explained, "the datum of pastoral theology is the lived experience of the faithful in the concrete call of their discipleship."

That reality is found throughout what McElroy called the "three fundamental foundations" for this understanding of pastoral theology.

Those underpinnings, he said, are:

"It is impossible to build up a pastoral church without explicitly investigating the signs of the times and then integrating the results … into the very core of the church's mission today," McElroy stated.

The bishop stressed Francis' "description of the church itself as a field hospital."

"We are gifted with the image of the church as a field hospital, focused precisely on the specific wounds that weigh down the men and women of our age as well as ourselves," he told his audience of nearly all senior priests.

McElroy quoted the pope who said, "I see clearly that the thing the church needs most today is the ability to heal the wounds and to warm the hearts of the faithful. It needs nearness, proximity. I see the church as a field hospital after battle.

"It is useless to ask a seriously wounded person if he has high cholesterol and about the level of his blood sugars. You have to heal his wounds. Then we can talk about everything else."

"The image of the church as a field hospital points to the reality that the church is never remote from human experience, never self-referential if it is to be faithful to its mission," McElroy said. "Rather the church must always be enmeshed in the real lives and sufferings and challenges and joys of the people of God and the whole of humanity."

The bishop described the field hospital descriptive as "earthy, rough-hewn, much like the stable in Bethlehem where our Lord revealed himself to the world."

In preliminary remarks, McElroy also used the image of the Holy Family, saying that U.S. border enforcement actions could well have led to the infant Jesus "being ripped from the arms of our Holy Mother."

The San Diego Diocese borders Mexico. McElroy has been outspoken in his criticism of U.S. immigration policy and has taken part in border protests and demonstrations.

According to AUSCP spokesman Paul Leingang, McElroy's address as well as those by assembly presenters Franciscan Sr. Katarina Schuth and Franciscan Fr. Richard Rohr, will be available on the organization's website. (NCR has posted McElroy's speech in full here, too.)