Franciscan Sr. Katarina Schuth: 'Do not lump together everyone under age 50' 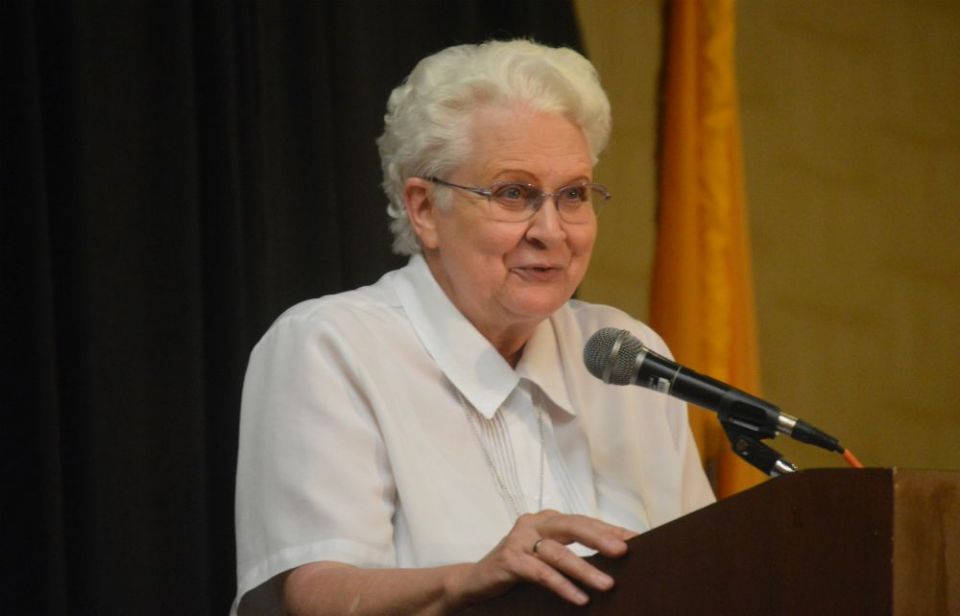 Albuquerque, N.M. — A leading expert on pastoral theology has underscored that the Catholic Church must quickly and effectively engage young Catholics through dialogue, awareness, listening, respect, humility, patience and creativity — or its future looks dim.

To make the quest even more daunting, Schuth, professor emerita at The St. Paul Seminary School of Divinity in St. Paul, Minnesota, where she was the endowed chair for social and scientific study of religion, told the more than 200 participants gathered here that millennial Catholics are made up of multiple groups which, in turn, have sub-groups.

A graphic in Schuth's presentation cautioned, "Do not lump together everyone under age 50 as 'our younger members.' They are not alike — and do not necessarily see things the same way. All members of a given generation are not clones of each other. Latino, Asian American or African American millennials and Gen Xers will differ from their white, middle-class counterparts and among each other."

It is dangerous, however, she said, to think of millennials of Hispanic/Latino descent as homogenous.

"There are enormous variations" among Latinos, she said, including country of origin, time residing in the U.S., economic and educational backgrounds. For example, she said, Latinos whose families "have lived generations" in the U.S. can have significantly different views than those who have recently immigrated.

That said, she told participants there are some generalizations that are predominant to the spectrum of millennials:

Fundamental to engaging young Catholics for the longer term, she said, is sincere listening to "their concerns and ideas" and genuinely incorporating them into decision-making and leadership.

Tools and approaches, she added, can include "forums, surveys and meetings to discover the needs of young adults, those both in the church and those not practicing."

Her checklist advocated letting millennials "know you believe in them and encourage them to go for their dreams" and "go out of the way to thank people for giving so much to the church when they do."

Schuth, author of several books, including Seminary Formation: Recent History, Current Circumstances, New Directions, indicated to NCR that she was probably preaching to the choir, as AUSCP members are by-in-large "seasoned pastors" who "really know what people need and want."

She still urged the audience of mostly senior, Anglo priests to keep in mind that millennials view church history and devotional practices with a significantly different "cultural mindset" than they.

"The Second Vatican Council is as distant [to millennials] as the Council of Trent," she said, and millennials offer "new interpretations" of devotional practices like praying the rosary or practicing eucharistic adoration.

Millennials, she explained in her presentation, "do not and cannot look at the church, the Mass, the hierarchy, the sacraments, devotions and other aspects of Catholicism with the same cultural mindset of older Catholics."

"Thus, what older generations may consider 'retro' Catholic practices such as the rosary, eucharistic adoration, Gregorian chant or religious habits, [these] may be attractive to young Catholics," Schuth said.

Along the same lines, she added, "different generations will process your message differently."

Millennials, for example, "are not used to waiting. A 12-hour delay in responding to an email is an eternity."

"An attractive, image-filled, interactive — and frequently updated — web page is far more effective than any printed material," she said. "Consider the possibilities of blogs and podcasts, too."

Getting young people back to the Catholic Church

Franciscan Sr. Katarina Schuth talks to NCR about meeting younger people where they are.

Schuth told NCR she was supportive of the AUSCP's January statement on priestly formation, "Preparing the Sixth Edition of the Program of Priestly Formation: Five Overriding Concerns."

Schuth lauded the priest organization's call for making the teaching of Vatican II the bedrock of the Program of Priestly Formation for U.S. seminaries currently under review by the U.S. bishops' Committee on Clergy, Consecrated Life and Vocations.

She also supports the AUSCP statement's call for enhanced psychosexual development and celibacy formation for seminarians, as well as greater parish-based pastoral experience and training.

On the second and third day of the assembly, AUSCP participants are scheduled to discuss more than a dozen resolutions and goals for the coming year. Topics include the status of women in the church, gun control and non-violence, promoting dialogue over debate, ongoing concern with liturgical text translations, and petitioning the U.S. bishops to seek Vatican permission to consider ordaining married men in light of an increasing U.S. priest shortage.

Franciscan Fr. Richard Rohr, an internationally known speaker and author on spirituality, was scheduled to make a 7 p.m. presentation on June 26, "Action and Contemplation: Toward Discipleship in a Secular Age," and direct attendees in a June 27 retreat from 10 a.m. to 3 p.m.