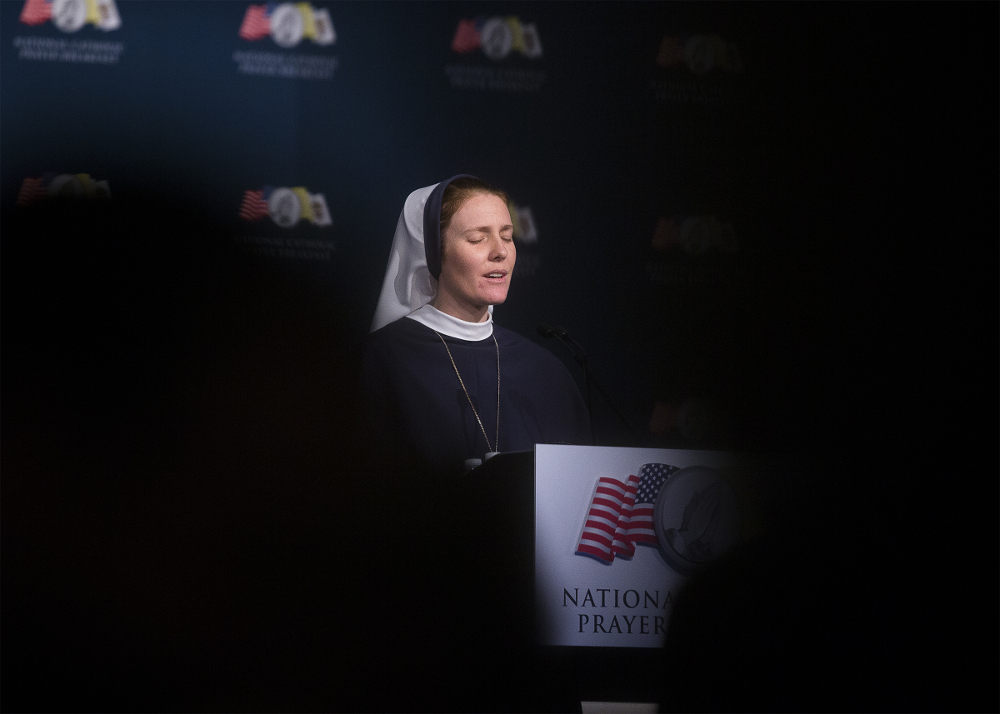 Preservation of the family, marriage and the unborn were the main themes of the annual National Catholic Prayer Breakfast at the Marriott Marquis hotel in Washington April 23.

"Faith in the crucified and risen Christ shields us from two cold and deadly sins: arrogant presumption and cynical despair," said Bishop Thomas Olmsted of Phoenix, the guest speaker. "Neither of which are appropriate in a Christian leader. The enemy of our souls does not care which we prefer."

Olmsted, who is a consultant to the pro-life committee of the U.S. Conference of Catholic Bishops, said the matter of legal abortion has defined his ministry, since he was ordained a priest in Lincoln, Nebraska, in 1973, the year of the Supreme Court's Roe v. Wade decision, which legalized abortion on demand.

"It is my pastoral duty to proclaim the Gospel of life and the protection in law of the most vulnerable among us. The love of Christ compels me."

Olmsted also recalled the words of St. John Paul II at a Mass on the National Mall in October 1979: "We will stand up and proclaim that no one ever has the authority to destroy unborn life."

Speaking of the Born-Alive Abortion Survivors Protection Act, recently blocked by House Democrats, Olmsted asked, "Where does blatant disregard for a child's life come from? From hardened hearts. A child demands love, and love costs."

"Any rejection of bodiliness," he added, "will immediately target two beautiful but demanding and sometimes inconvenient realities: marriage and the human child." Marriage, he said, "stands now in the way of the gender ideology. We Christians will stand for the reality of marriage today in our homes and the public square, even when facing persecution today."

A rapidly lowering birth rate in the United States, he said, means that the warning about contraception in St. Paul VI's 1968 encyclical, "Humanae Vitae," has come true, and "the disaster invited by theologians, bishops, priests and laity who protested Paul VI's prophetic letter is upon us," with sexual pleasure separated from procreation. "Enough!"

"Christians are called not to complacency, but to greatness, to have hearts great enough to be filled with God," Olmsted concluded.

Mick Mulvaney, the acting White House chief of staff and director of the Office of Management and Budget, spoke briefly about President Donald Trump's commitment to religious liberty.

"The president has allowed us Christians, of all denominations, to be very vocal about their faith and to prioritize our faith," he said. "Over the past two-and-a-half years, I think you can see the principles of our faith being manifested." Trump has addressed the annual March for Life rally via a video hookup the past two years.

"I won't lie to you, that that's pretty powerful stuff. To be able to be there, to be part of that, has been very invigorating," said Mulvaney, a member of Opus Dei and a graduate of Georgetown University.

"I'm comfortable as a Catholic, even though I'm working for a president who is not Catholic, that the principles of our faith are alive and well and well respected in this administration and driving many of our policies," he added.

The 1,400 attendees gave a standing ovation to Ted and Julie Sandmann, parents of Nick Sandmann, the Covington (Kentucky) Catholic High School student who was thrown into the center of a national spotlight in January when videos of him and his classmates interacting with Native Americans and others near Washington's Lincoln Memorial went viral.

Also garnering a loud ovation was Abby Johnson, the pro-life activist who runs And Then There Were None, a ministry to former abortion clinic workers, who was recently portrayed in the film drama "Unplanned," which proved to be successful at the box office.

"The critics, they thought we'd make 40 bucks, and we're sitting on $17 million right now," she said. The film, which cost $6 million to make, is her story as a former director of a Planned Parenthood clinic who eventually rejected abortion to join the pro-life movement.

"I'm waking up every day getting emails from people; who told me they walked into the film pro-choice and walked out pro-life. This is why we decided to do 'Unplanned' — for the conversion of hearts."

Also speaking were Sr. Bethany Madonna, vocations director of the Sisters of Life, and Curtis Martin, the founder and CEO of the Fellowship of Catholic University Students.

The breakfast has been held annually since 2004. The event was established in 2004 in response to St. John Paul's call for a new evangelization. George W. Bush was the only president to address the gathering, doing so from 2005 to 2008. Vice President Mike Pence addressed the breakfast in 2017.