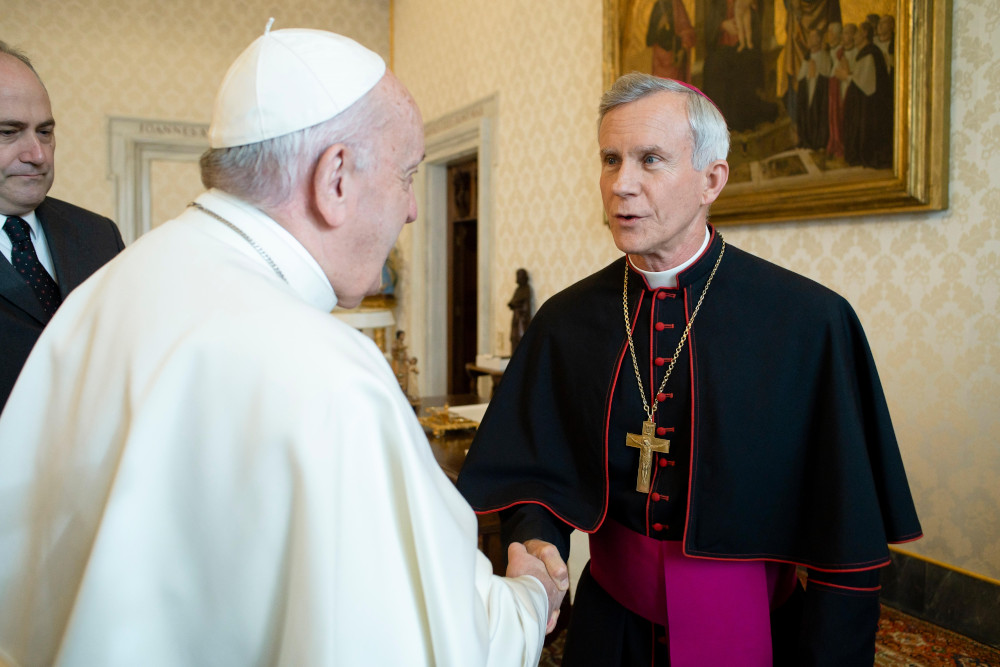 Pope Francis greets Bishop Joseph E. Strickland of Tyler, Texas, during a meeting with U.S. bishops from Arkansas, Oklahoma and Texas during their "ad limina" visits to the Vatican Jan. 20, 2020. Bishop Strickland said he asked Pope Francis about the Vatican investigation into Theodore E. McCarrick and the release of a promised report on how the former cardinal managed to rise through the church ranks. (CNS/Vatican Media)

Bishop Joseph E. Strickland of Tyler, Texas, said he asked Pope Francis about the Vatican investigation into Theodore E. McCarrick and the release of a promised report on how the former cardinal managed to rise through the church ranks.

The bishop, who was making his "ad limina" visit to Rome, drew widespread attention in August 2018 for a public statement saying he found "credible" the allegations made by retired Archbishop Carlo Maria Vigano, the former nuncio to the United States, regarding McCarrick.

Vigano alleged that top Vatican officials, including Francis, knew for years that McCarrick had been accused of sexual misconduct.

Strickland at the time called for a "thorough investigation, similar to those conducted any time allegations are deemed to be credible."

"Pope Francis was great" in answering all the questions of the bishops of Texas, Oklahoma and Arkansas during an audience Jan. 20, Strickland told Catholic News Service the next day. But the pope did ask the bishops not to share certain details about the discussion.

Strickland said he does not regret what he said in his 2018 letter — "honestly, I guess I didn't realize how controversial it was at that time" — but as someone who studied canon law and as a bishop, "credible allegations" must be investigated and dealt with.

"If I regretted anything," he said, it would be that Vigano called for Francis to resign. "I never intended to embrace that, because that's a major thing to say."

"I certainly didn't want to validate that," Strickland said, "but I said these allegations about McCarrick need to be investigated, and they have been and the report, according to Pope Francis yesterday," will be published.

"I'm a Catholic bishop. Of course, I support the vicar of Christ," he said.

The summer of 2018 had been difficult for Catholics, beginning with the news in June that McCarrick had been suspended from ministry, followed by dozens of stories detailing his sexual misconduct with seminarians and then allegations of sexual abuse of children; McCarrick's resignation from the College of Cardinals in July; and the release in August of the Pennsylvania grand jury report on abuse and its cover up in six dioceses.

Strickland said the priests and faithful of his diocese "were devastated at that time," and his reaction to Vigano's report could be seen as him "taking on the smell of my sheep," as Francis would say.

The bishop said he knew people are frustrated that it is taking so long for the report to be published, but "an institution that's been around 2,000 years doesn't turn on a dime."

When the report on McCarrick is published, he said, there will be a "dust-up" in the media, and it likely will cause Catholics more pain, but it also could bring "a sense of closure."

"I've always said that what hit the news with McCarrick began this moment of pain and struggle and confusion in the life of the church. It won't magically disappear with this report," Strickland said, but it should help people move forward.

"It's about the victims. It's about the children of God who have suffered through the negligence and bad acting of bishops, priests and other members of the church," he said. The report should help McCarrick's victims by acknowledging how the church failed to protect them.

Asked if he believed Vigano's accusation that Francis knew about McCarrick's misconduct with seminarians as early as 2013, Strickland said, "Honestly, I'd have to say I do not know."

But some of the things the pope told the bishops "makes you realize that it's always a bigger picture than maybe the slice you are looking at," he said, while insisting he could not say more. "I certainly am not ready to judge the actions in the moment of any of the pontiffs" who were in office during McCarrick's rise from priest to bishop to cardinal.

Strickland admitted he was "a bit nervous" about meeting Francis for the first time, but the bishops' Mass that morning at the tomb of St. Peter was a reminder that God calls men, flawed human beings, to cooperate with his grace and "to guide the church inspired by the Holy Spirit."