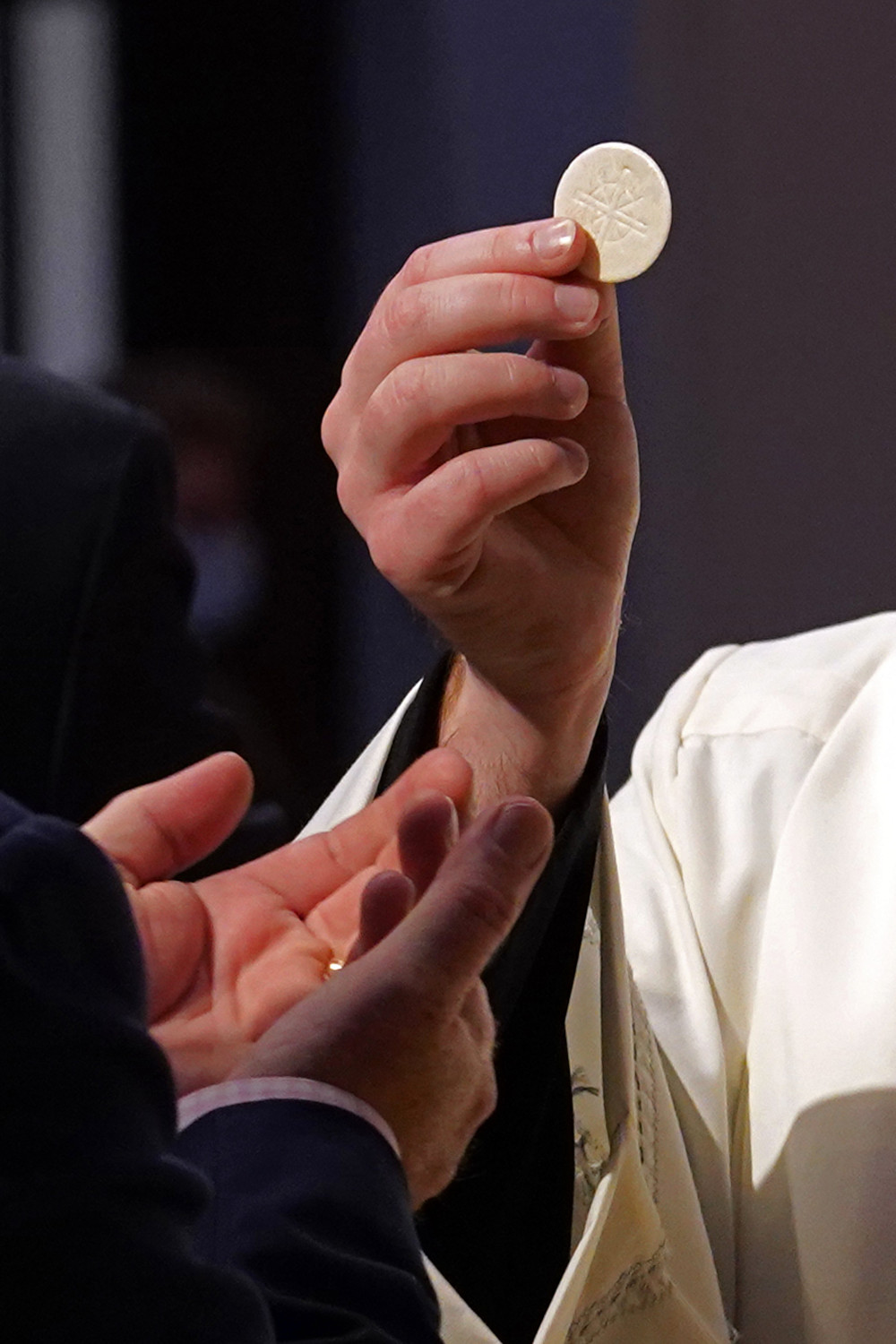 A priest gives the Eucharist to a communicant during a Mass at St. Agnes Cathedral in Rockville Centre, N.Y., in 2020. (CNS photo/Gregory A. Shemitz) 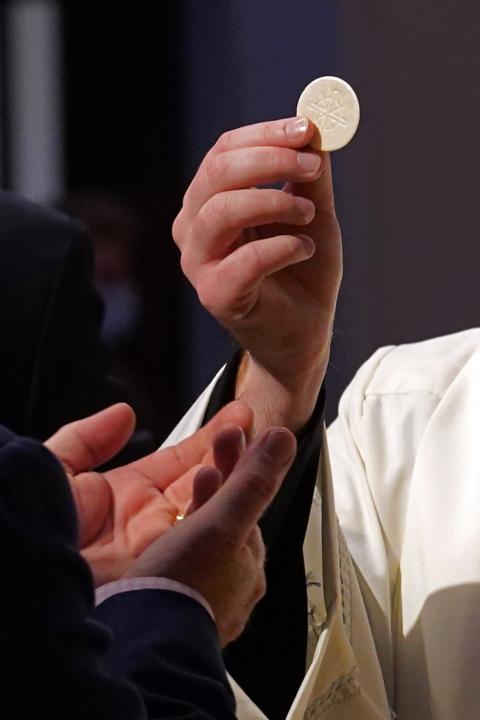 A priest gives the Eucharist to a communicant during a Mass at St. Agnes Cathedral in Rockville Centre, N.Y., in 2020. (CNS photo/Gregory A. Shemitz)

Bishop Robert W. McElroy of San Diego warned against the "weaponization of Eucharist" as a way to get Catholic elected officials, President Joe Biden among them, to adhere to the church's stance on abortion.

"I do not see how depriving the president or other political leaders of Eucharist based on their public policy stance can be interpreted in our society as anything other than the weaponization of Eucharist and an effort not to convince people by argument and by dialogue and by reason, but, rather, to pummel them into submission on the issue," McElroy said.

"It would be very destructive. It would also cast the (U.S. bishops') conference more significantly into the role of being partisan, as being associated with one party rather than the other."

McElroy made the comments during a Feb. 1 online forum, "President Biden, U.S. Bishops and Pope Francis: How to Promote Catholic Principles in a Divided Church and Nation," sponsored by the Georgetown Initiative on Catholic Social Thought.

Other forum panelists issued their own cautions on the issue.

"We should try to persuade others to join us, not just condemn. We need to spend a lot more time talking about the humanity of the unborn child than whether Joe Biden can go to Communion," said John Carr, the initiative's co-director.

"Denying Communion — there is a reason why throughout history the church hasn't done this. Why it isn't done around the world. Why almost no Catholic dioceses do this. It seems to me to be logically inappropriate, a disaster and counterproductive," Carr said.

Anne Thompson, a reporter for NBC News and a Catholic who graduated from the University of Notre Dame, recalled doing "this piece that I did for the 'Today' show on Biden's faith (and) was looking at what John F. Kennedy said in 1960 when he spoke to that convention of Baptist ministers at the Rice Hotel in Houston. He said, 'I do not speak for my church on public matters, and the church does not speak for me.' Fast-forward 61 years," she said, "and that seems not to be enough anymore."

"Some bishops want to recast the presence and tone of the (bishops') conference in the public order," McElroy said.

"They argue that abortion is not merely a preeminent issue in Catholic social teaching, but rather constitutes the de facto litmus test for determining whether a Catholic public official is a faithful Catholic and for determining whether the overall policy stances of non-Catholic officials can be considered morally legitimate," he added. "If adopted, such a position will reduce the common good to a single issue."

Helen Alvare, a professor at the Antonin Scalia Law School at George Mason University in Virginia, and the first public information director for the bishops' Secretariat for Pro-Life Activities when she was hired in 1990, did not dismiss the possibility of sanctions.

"We know that bishops have excommunicated folks for failure to integrate schools, etc. We know this is the case. But there is something different" about abortion, Alvare said. "The church has 2,000 years of theology it can bring this to bear on what is a theological question."

"So many issues are questions of differences of opinion of how to protect the common good. This is different," she said.

The forum drew "some 4,900" RSVPs, said Kim Daniels, whose promotion from associate director to co-director of the Initiative for Catholic Social Thought was announced during the forum. That number, according to Anna Misleh, project manager for the initiative, is the second highest in the series of online forums it has held since the pandemic stated.

The only one larger was a program on racial justice matters June 5, the week federal officers tear-gassed Black Lives Matter demonstrators protesting the death of George Floyd while in police custody in Minneapolis to allow then-President Donald Trump to pose with a Bible outside a Washington, D.C., church across the street from the demonstration.

"Abortion is different. So is racism. That's a fundamental and that's a big part of why I could not support Trump and why I ended up supporting Biden in spite of his position on embracing the extremism of his party," Carr said. "Separating children from their parents at the border is different and demands a response."

He added, "The reason why Catholics in Pennsylvania and Wisconsin and Michigan supported Biden, it's not because he was gonna repeal the Hyde Amendment (which bans federal funding for abortions with some exceptions), but he was gonna lead with some empathy and try and heal the country."

By focusing on abortion, "you miss the opportunities" to find common ground, Thompson said.

One example was Pope Francis' dialogue with then-President Barack Obama. Observers, she noted, dwelt on church objections to the contraceptive mandate of the Affordable Care Act only to be surprised to learn of the pope's role in brokering regularized relations between the United States and Cuba.

Pope Francis does not want to get involved in a nation's politics, but "somebody's always trying to reel him into that," she added, taking note of the encounter during the pope's 2015 U.S. visit with Kim Davis, the county clerk from Kentucky who had refused to issue marriage licenses for same-sex couples.

Davis "had a brief meeting with the pope, and it was blown up to be a 30-minute private audience, and then it was pulled back and pulled back, and the Vatican put out two press releases saying it was nothing more than a quick meet and greet. And then finally, the pope released the video of him meeting with his former student, who is a gay man, and his partner. And so you see that pushback," Thompson said.

"And I think you saw that pushback" again, she added, "when Pope Francis very publicly said he met with Cardinal (Blase J.) Cupich (of Chicago) the day after he (the cardinal) opposed President Biden's letter (written by Archbishop José H. Gomez, president of the U.S. bishops' conference) on the day of his inauguration."

In his Inauguration Day statement, Gomez expressed hope the Biden administration would work with the church "and others of goodwill" to "address the complicated cultural and economic factors that are driving abortion and discouraging families."

For the U.S. bishops, he said, the "continued injustice of abortion" remains the "preeminent priority," he said, but "'preeminent' does not mean 'only.' We have deep concerns about many threats to human life and dignity in our society."

"I have enormous sympathy for Archbishop Gomez trying to craft something that would hold the conference together," Carr said, adding the church has "unique assets: a set of ideas, a set of experience, presence all across the country, around the world."

"Many people, many Catholics and leaders like Archbishop Gomez, like Bishop McElroy, like Pope Francis," Carr added. "A friend of mine said, 'If you ever got your act together, you'd be dangerous.' My fear is we don't have our act together."