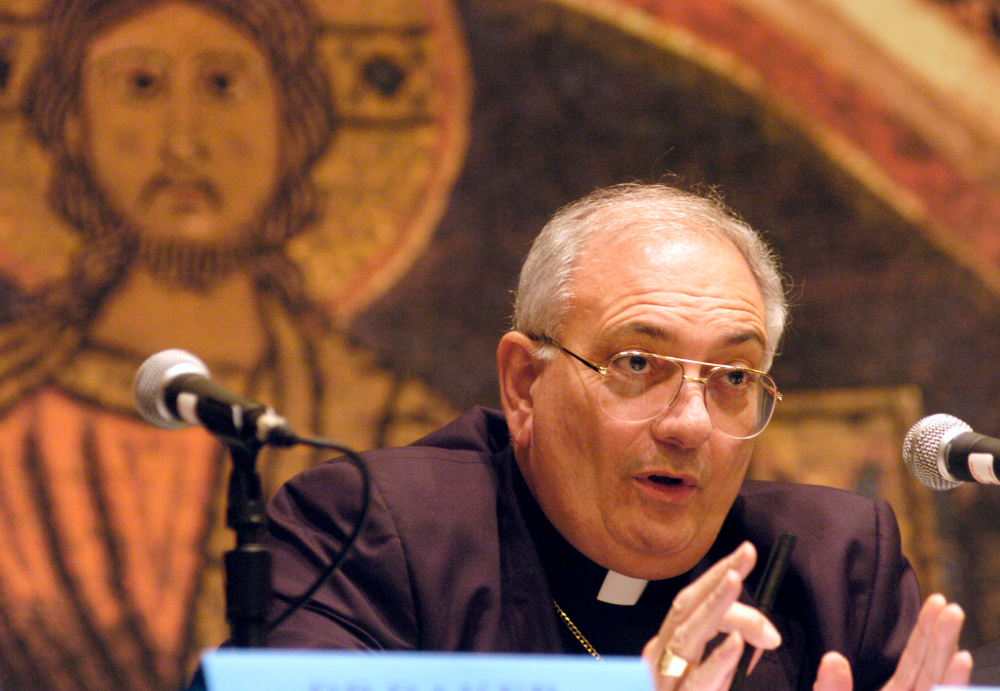 This Nov. 14, 2007 file photo shows Bishop Nicholas DiMarzio of Brooklyn, N.Y. speaking during a news conference at the U.S. Conference of Catholic Bishops fall meeting in Baltimore. DiMarzio, named by Pope Francis to investigate the church’s response to clergy sexual abuse in Buffalo, New York, has himself been accused of sexual abuse of a child, an attorney for the alleged victim notified the church in November 2019. (AP/Steve Ruark)

A Roman Catholic bishop named by Pope Francis to investigate the church’s response to clergy sexual abuse in Buffalo, New York, has himself been accused of sexual abuse of a child, an attorney for the alleged victim notified the church this week.

The attorney informed Catholic officials in New Jersey that he is preparing a lawsuit on behalf of a client who says he was molested by Brooklyn Bishop Nicholas DiMarzio in the mid-1970s, when DiMarzio was a parish priest in Jersey City.

DiMarzio said there is no truth to the accusation.

“I am just learning about this allegation,” he said in a statement Tuesday to The Associated Press. “In my nearly 50-year ministry as a priest, I have never engaged in unlawful or inappropriate behavior and I emphatically deny this allegation. I am confident I will be fully vindicated.”

In a letter sent Monday to the church’s Newark, New Jersey, archdiocese, Boston attorney Mitchell Garabedian said 56-year-old Mark Matzek alleges he was repeatedly abused by DiMarzio and a second priest, the late Rev. Albert Mark, when he was an altar boy at St. Nicholas Church and a student at St. Nicholas School.

Last month, Pope Francis tapped DiMarzio to investigate the church’s Buffalo Diocese, where Bishop Joseph Malone has come under fire for his handling of a burgeoning clergy abuse scandal that has roiled the diocese and prompted calls for his resignation.

“The investigation of the diocese of Buffalo by Bishop DiMarzio is tainted because of these allegations,” Garabedian said in an interview with the AP. “There needs to be a truly neutral investigator to determine whether Bishop Malone should resign,” adding that the investigation should be led by a law enforcement agency.

Adriana Rodriguez, press secretary for the Brooklyn Diocese, said DiMarzio has completed his report on the Buffalo Diocese and has submitted it to the Vatican. DiMarzio and Malone are in Rome this week for a previously scheduled visit of New York bishops to the Holy See.

Garabedian said the notice he sent to the Newark Archdiocese briefly describes Matzek’s allegations and the damage he has allegedly suffered, while demanding $20 million in compensation.

Maria Margiotta, the spokeswoman for the Newark Archdiocese, said it has received Garabedian’s letter and reported Matzek’s allegations to law enforcement.

Garabedian told the AP he plans to file the lawsuit on Matzek’s behalf next month, after New Jersey opens a two-year “look back” period in which sex abuse victims will be permitted to file lawsuits without regard to the statute of limitations, which typically limits the amount of time in which an alleged victim may file suit.

DiMarzio completed his review of the Buffalo Diocese, known as an “apostolic visitation,” last month. He said he made three trips to the diocese over seven days and interviewed nearly 80 clergymen and parishioners.

A version of this story appeared in the Nov 29-Dec 12, 2019 print issue under the headline: Bishop who investigated sex abuse accused of it.