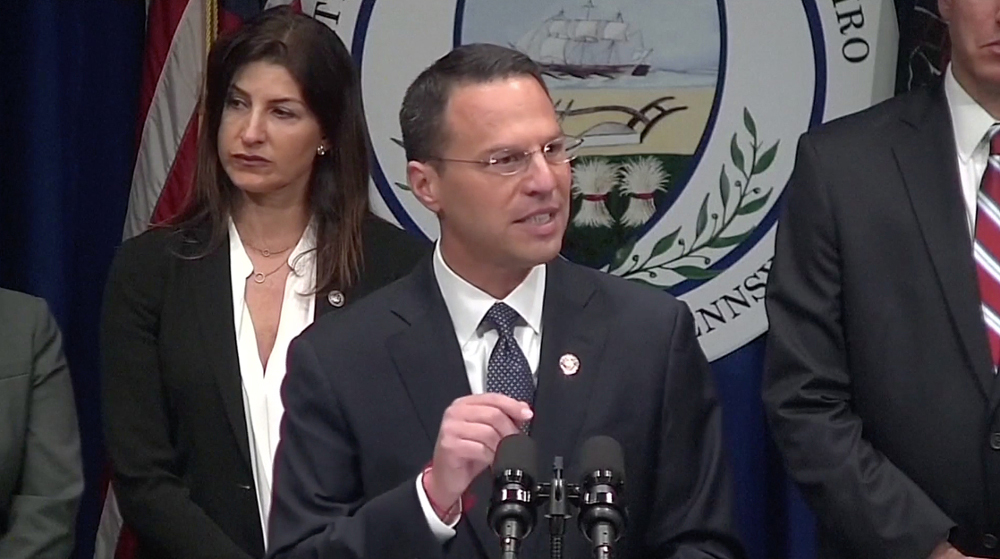 In a screen grab taken from video, Pennsylvania Attorney General Josh Shapiro speaks during an Aug. 14 news conference to release a grand jury on a months-long investigation into abuse claims spanning a 70-year period in the dioceses of Harrisburg, Pittsburgh, Scranton, Allentown, Greensburg and Erie. (CNS/Reuters video)

In a tweet, a U.S. bishop said he had spent the night reading a grand jury report detailing seven decades of child sex abuse claims in six Pennsylvania dioceses and "it was like reading a horror book."

Unfortunately, it was not a fictional account, wrote Bishop Richard Stika of Knoxville early Aug. 15, a day after the Pennsylvania Office of the Attorney General published the mammoth document of more than 1,300 pages detailing accounts of the rape of children, secrecy by church officials and some law enforcement failures over 70 years.

"It is real and lives were destroyed and faith shattered," Stika tweeted.

He joined at least a dozen or so prelates outside of Pennsylvania who, via Twitter, TV or in person, at Masses for the feast of the Assumption, took time to express the same sorrow and pain that lay Catholics have been feeling and expressing. But many bishops also spoke about the added layer of what to do about the pain of a shattered trust between shepherds and their angry and pain-stricken flock that many say they now must fix.

"This is extraordinarily painful, it is humiliating, it is nauseating," said New York Cardinal Timothy Dolan during an interview with local CBS station WLNY in New York City. "This is a kick in the gut. I really worry about a loss of credibility, a loss of trust. There's no use denying it. We can't sugarcoat this. This is disastrous."

Painfully aware of the anger Catholics are voicing after the revelations out of Pennsylvania, Boston Cardinal Sean O'Malley said Aug. 16 that something must be done right away.

"The clock is ticking for all of us in church leadership, Catholics have lost patience with us and civil society has lost confidence in us," said O'Malley in a statement. "But I am not without hope and do not succumb to despondent acceptance that our failures cannot be corrected."

Transformation has to take place in the way the church prepares priests, "the way we exercise pastoral leadership and the way we cooperate with civil authorities; all these have to be consistently better than has been the case," he said, adding that "we remain shamed by these egregious failures to protect children and those who are vulnerable and affirm our commitment that these failures will never be repeated."

At the Basilica of the National Shrine of the Immaculate Conception in Washington, Cardinal Edwin O'Brien, grand master of the Equestrian Order of the Holy Sepulchre, began a Mass on the feast of the Assumption Aug. 15 by making a brief reference to the developments.

"Mary, our patroness, has guided the church in America through many difficult moments," he said. "Today, yet another moment of trial is upon us, a very serious crisis which has brought many of our people to the point of despair and anger and even the loss of faith."

He said he offered the Mass asking for Mary's intercession, so "that the bishops of our nation might accomplish a renewal of trust in the church and its leaders across the land."

"And no less I ask Mary's son, the Good Shepherd, for the graces of healing, reconciliation and justice for all the people of God among us, above all for those who have been abused and their families," he said.

The report by a Pennsylvania grand jury of 23 people said the investigation of almost two years identified more than 1,000 people who say they were abused by some 301 priests, many whom are now dead.

However, some living priests named in the report are disputing some of the information and claims in the document and challenged to have their names blacked out, or redacted. They will be heard by the courts in September. The grand jury said it was likely that more victims as well as perpetrators were not identified in the months-long investigation.

Dallas Bishop Edward Burns told The Dallas Morning News he felt "sick" reading the accounts, "knowing that this occurred at the hands of men that you knew and even worked side by side with adds to a dimension of disbelief."

Burns grew up in Pittsburgh and knew some of those named in the report, The Dallas Morning News article said.

Recalling one of the priests named in the report, Burns told the newspaper that the priest "was domineering, he was extremely bossy, he did not possess a shepherd's heart, from my perspective," adding that "now I have come to recognize that he not only had a different view of priesthood, he just had a double life.

But like others, he never suspected the horrors that were taking place.

Archbishop of Detroit Allen Vigneron said in an Aug. 13 statement, before the report became public, that it was disheartening, "for us once again to come face-to-face with moral failures in the priesthood, especially among us bishops."

"These sins are marks of shame upon the church," he said.

Though there may be the temptation to despair and think that change is not possible, "reform can only happen when hope lives," he said.

"We must move forward with the conviction that God will not abandon his church. He wants her purified, cleansed of these sins and brought to new life," he said.

Los Angeles Archbishop José Gomez urged prayers during the feast of the Assumption for abuse victims.

"We are aware that this is a sad and confusing time for the church in this country," he said in his homily. "In recent days and weeks, we have heard new revelations about sin and abuse in the church. This is a time now for prayer and repentance and a time for examining our conscience, especially for those of us who are bishops and priests."

Bishop Michael Olson of Fort Worth, Texas, said in an Aug. 14 statement that it's time to hold accountable "morally and legally" those who allowed the abuse in Pennsylvania to occur, as well as those who hid alleged abuses by former Cardinal Theodore McCarrick.

"Pledges of penitential prayer and actions on the part of church leadership are meaningless unless first preceded by contrition, confession, firm purpose of amendment and concrete actions of conversion," he said.