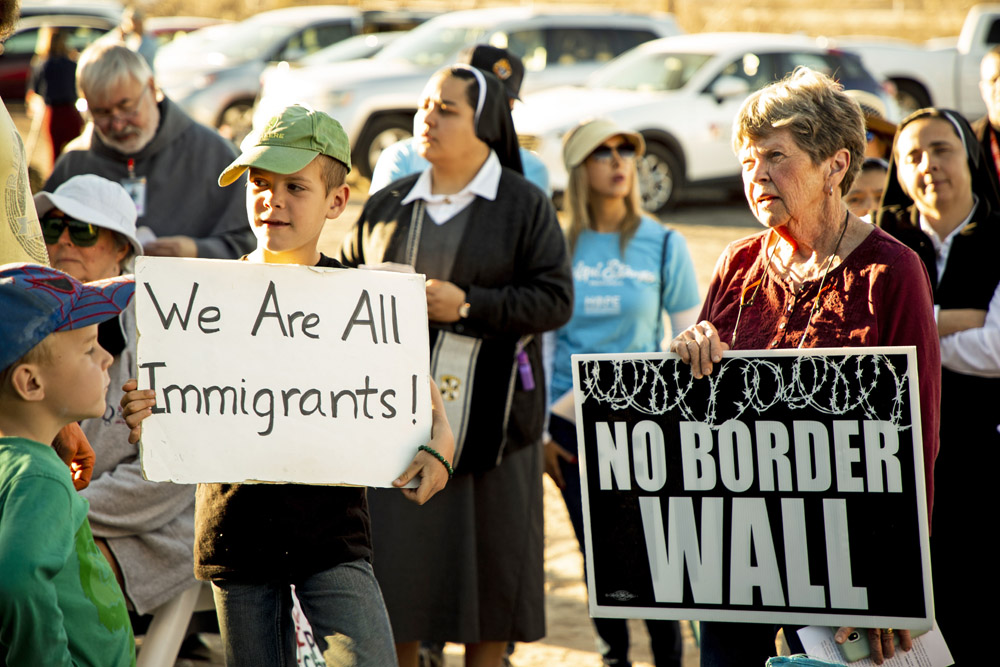 Pat Delgado, right, longtime shelter volunteer and social justice activist, makes a statement on the U.S. side of the Anapra, Mexico, border fence, just outside the city of El Paso, Texas. (Fernando Ceniceros/Diocese of El Paso)

While the Trump administration seeks to prove the existence of a national emergency at the country's southern border, the El Paso, Texas, community is living — and humanely responding to — the reality.

During the past several weeks, Immigration and Customs Enforcement, or ICE, has released, on average, more than 3,500 migrants per week to the community. That’s a 1,689-percent spike in the number of family units apprehended in the El Paso sector, from fiscal-year-to-date February 2018 to February 2019, according to U.S. Customs and Border Protection (or CBP) data. And the increase is expected to continue through the warmer spring months.

Yet the borderland's faith communities are not turning their backs. On the contrary, tens of thousands of volunteers have mobilized to meet the need. At a recent gathering of the Texas-Mexico delegation of bishops at the Anapra, Mexico, border fence, just outside the city of El Paso, the message of solidarity was clear — we stand with migrants and refugees. 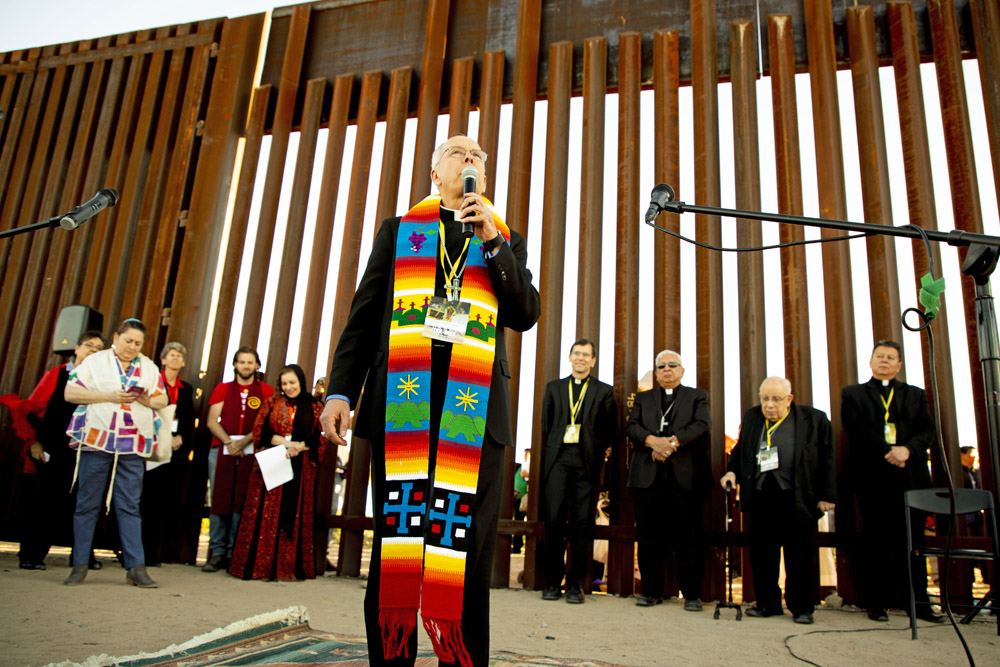 Local interfaith leaders and a delegation of bishops listen to Bishop Mark Seitz of El Paso, Texas, share stories of the plight of immigrant families, Feb. 26 at the Anapra border fence, just outside the city of El Paso, Texas. (Fernando Ceniceros/Diocese of El Paso)

Titled "Dark Times Call for the People of God to Be Bold," the three-day event — co-sponsored by the Diocese of El Paso Commission on Migration and the Hope Border Institute — sought to devise concrete strategies to push back against what Hope Border Institute executive director Dylan Corbett called "the false narratives coming out of Washington that are exploiting people's fears about the border and migration."

Representatives from the Vatican, Catholic Relief Services, the Leadership Conference of Women Religious, migrant shelters in Tijuana and Juarez, Catholic Charities of the Rio Grande Valley, as well as local interfaith leaders and bishops from Texas, New Mexico, Arizona, California and Mexico, met to respond to the Trump administration's efforts to hold asylum-seekers in Mexico — a practice they are calling dangerous and inhumane.

"All of us are committed to the fact that we have to care for the people who experience the immigration reality on the ground," said Bishop Daniel Flores, who, along with Sr. Norma Pimentel, retired Bishop Raymundo Peña and Auxiliary Bishop Mario Avilés, represented the Diocese of Brownsville, Texas — the busiest corridor along the U.S.-Mexico border. "The church's principal responsibility is to keep as real as possible the conversations about what's happening to real people and real families instead of a tendency to make immigration an abstract discussion about laws and principles and an alleged impact on economy." 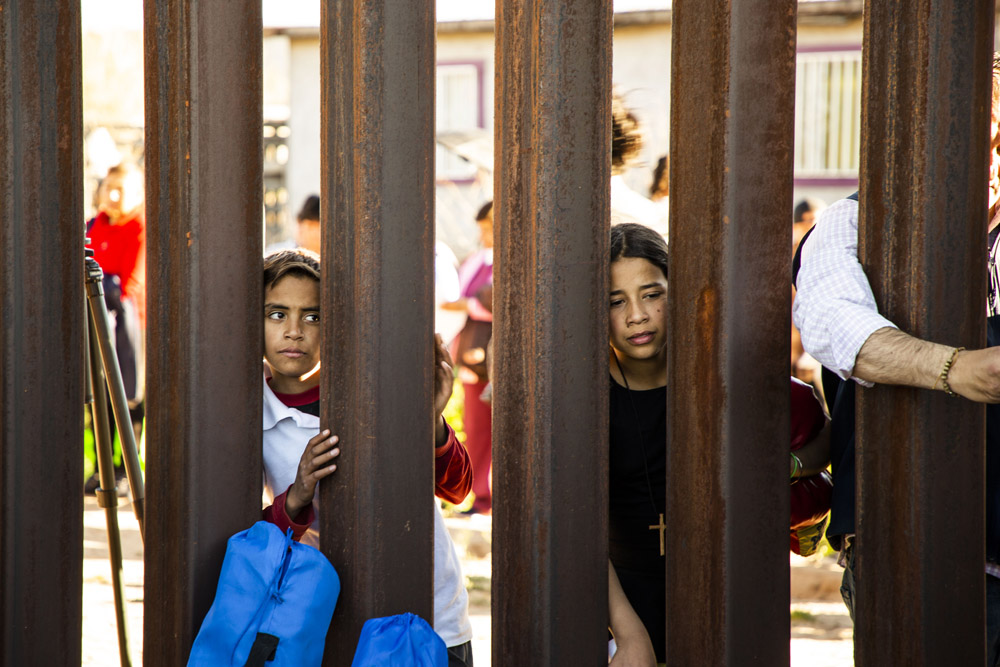 Many of the laity at the Anapra event, myself included, are already responding "on the ground," devoting long hours to care for the growing needs of immigrant families. Dozens of temporary hospitality centers have cropped up throughout the area known as the borderlands, from east El Paso to southern New Mexico.

An ecumenical collaboration of churches have opened their spaces and combined resources, some of them located in the poorest sections of the borderlands. Bishop Mark Seitz of El Paso opened the diocesan pastoral center last fall and has since received families daily. All are responding to a call for help from Ruben Garcia, executive director of Annunciation House, a Catholic nonprofit with a 41-year history of welcoming migrants and refugees. His motto, "Not one refugee to the streets," has meant that after ICE processes those seeking asylum and is ready to release them from CBP holding cells, the agency contacts Garcia rather than deposit them downtown. Garcia in turn designates, based on the amount of beds available, which shelters will receive the families and how many. This daily task has grown more challenging for Garcia and the community as unprecedented numbers of immigrant families have been arriving.

On March 21, Garcia made a televised appeal to area churches requesting additional shelter after ICE texted him that they would be releasing some 600 migrants each day over the coming weekend. Lacking current capacity to receive such numbers, Garcia appealed to churches that have not yet stepped up to help. Recently he succeeded in garnering support from the Catholic community in Albuquerque, New Mexico, which accommodates some of the migrants on weekends. 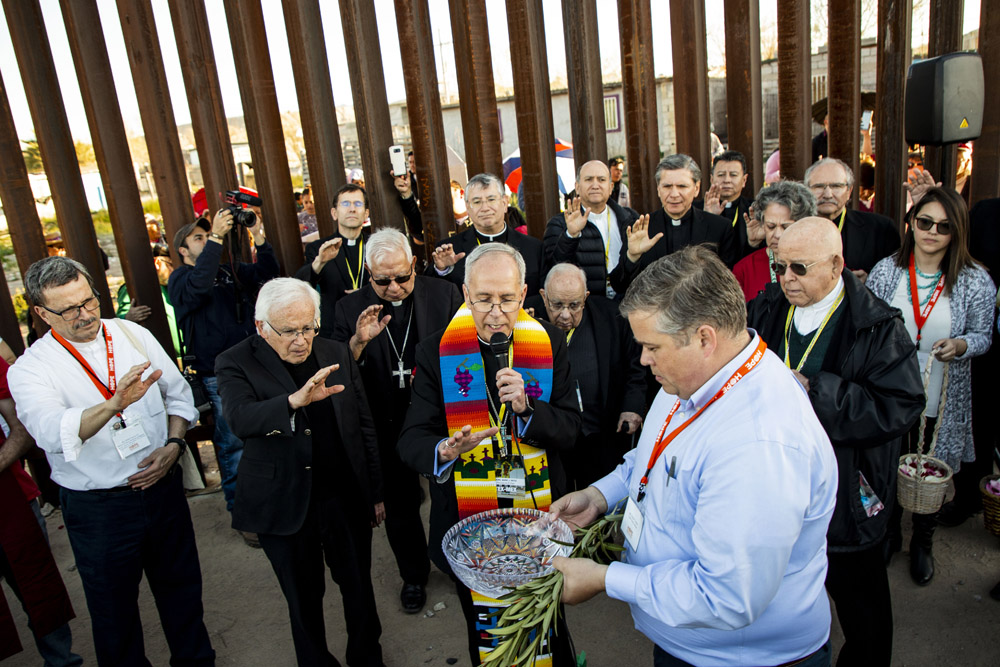 As a longtime volunteer at Loretto Nazareth, a temporary hospitality site that has operated almost consistently since 2014, I have witnessed the ebb and flow of migrant families coming to our border. Some months, as few as 30 people were delivered to our door. Even during seasonal increases, rarely did the community regularly receive 100 a day. That has quickly changed over the past several months, as shelters have gone from accompanying 700 people per week to 500-700 per day.

Despite rhetoric to the contrary, the total number of illegal apprehensions on the Southwest border has declined significantly. According to statistics from CBP, apprehensions peaked at 1.64 million in 2000 and have generally declined since, totaling 396,579 in 2018. But those apprehended increasingly are family units, creating more complex and humane needs and challenges. 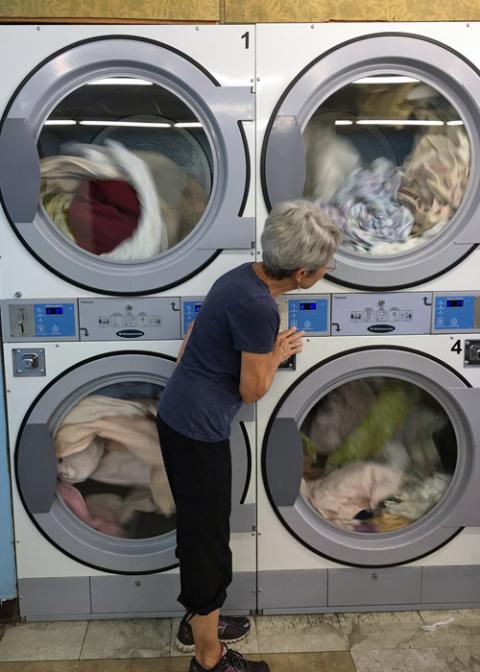 Volunteer Linda Michon checks the status of several loads of sheets and towels at local laundromat, one of many volunteer jobs at the hospitality centers. (Joseph Michon/Loretto Nazareth)

At the shelters, families are connected with their sponsor, who then purchase bus or airline tickets to a location elsewhere in the country where the family will await asylum or deportation hearings. During the family's 24- to 72-hour stay at the shelter, we give them hot meals, showers, a change of clothes, and a cot to sleep on while awaiting ticket confirmations. Such an operation requires a cadre of volunteers and supplies, including food, clean sheets, towels, diapers, shampoo, water bottles and new underwear. With the growing numbers, shelters are constantly "understaffed" and in need of donations.

"We're all overwhelmed," said Kim Sorensen, who travels 45 minutes from her home every weekend to volunteer at one of three hotels paid for by the El Paso community — a costly solution to daily accommodate the overflow of families.

But like many of us, Sorensen realizes, "This is about something so much bigger than me. It's about desperate people in need. The alternative is unacceptable."

Without volunteers' assistance, an already vulnerable population of families, many with young children, would be released with no food, no money, and no idea of how to get to their sponsors. That is unacceptable to volunteers like Sigrid Gonzalez, who has experienced a different side of immigrants than what's presented in mainstream media.

"Seeing the goodness of the people, their positive attitude, their purity, grounds me very much," Gonzalez said. During nine months of volunteering she has personally encountered migrants as "naive, humble, goodhearted people," and she's concerned about possible exploitation. 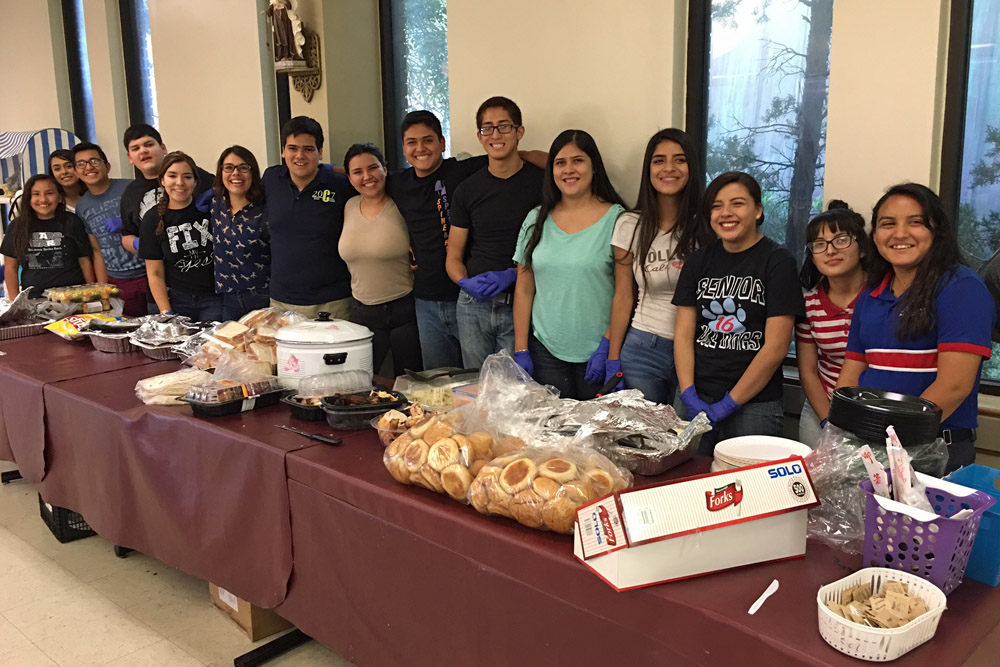 A group of youth from an El Paso parish poses before serving dinner they prepared for migrant families. (Joseph Michon/Loretto Nazareth)

Previously a special advisor in the Department of Homeland Security under the Obama administration, Gonzalez traveled to Guatemala, Honduras, and El Salvador as part of a team that attempted to curb migration through a messaging campaign — a program that ended with the new administration. With no counter messaging, Gonzalez fears immigrants are being lied to by smugglers who can charge as much as $7,000 to $8,000 per family.

Sr. Terri Rodela, a Franciscan of Dubuque, Iowa, and a native El Pasoan who has served the immigrant population most of her religious life, is also concerned. "None of this is going to change without changes in our policies and in their countries. It's going to continue to be a business for smugglers and for those who want cheap labor here," she said.

Despite feeling overwhelmed lately, Rodela said she will continue to "provide some sort of welcome because they have suffered more than what I know." 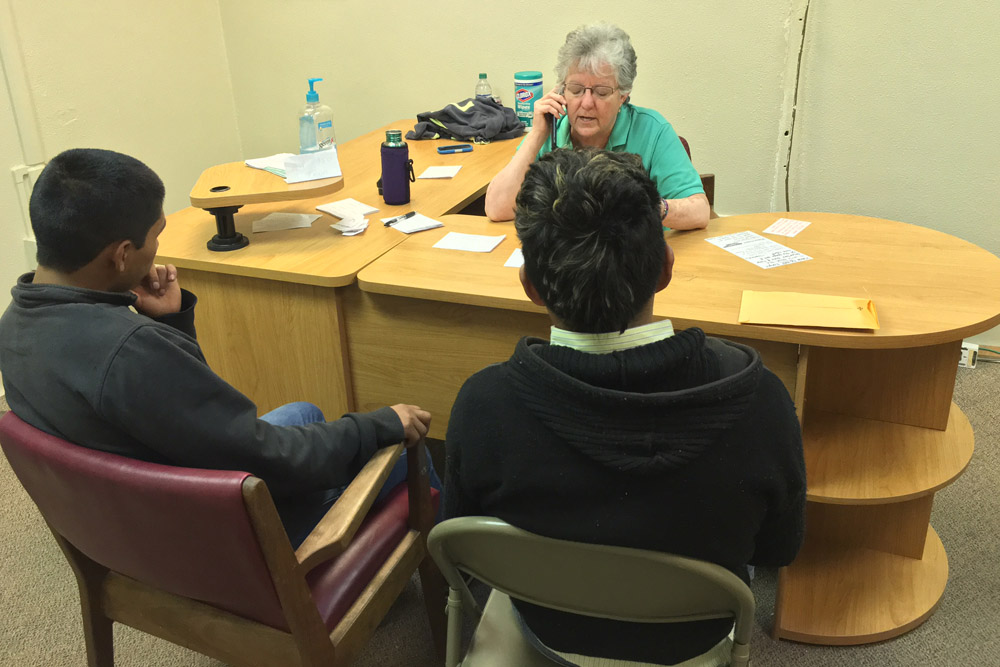 Sr. Terri Rodela calls the family of a father and son to notify them of their location and assist in making travel arrangements. (Joseph Michon/Loretto Nazareth)

"We might be getting exhausted, but we will always step up," Gonzalez added. Her words reflect the compassionate actions of a community that keeps responding without any support from the government. However, its efforts have been supplemented through individual monetary donations, supplies and volunteers nationwide.

"As we spread the word that help is needed, there's always somebody that says yes," Gonzalez said. "And not only in El Paso." From college students on spring break to Catholic sisters responding to a call from LCWR, new volunteers have been arriving to assist at the shelters for an average of two weeks at a time. Such help is invaluable to keep the numerous sites operational.

He admits that it certainly will be a test to see if the community can continue to sustain this effort, but the Texas-Mexico delegation is more concerned about what will happen on the other side of the border if the administration's "Return to Mexico" policy is implemented in El Paso. Corbett said Mexico does not have the infrastructure to support asylum-seekers, nor will they have access to legal providers or the support of their family or sponsors, and migrant children especially will be susceptible to the crime and violence.

"The smartest and most humane thing we can do is address the drivers of migration in those countries," Corbett said. "We have to tell the story to lawmakers and policymakers and speak up on behalf of human life."

His words were similar to a message for Catholics that Flores reiterated at the Anapra fence.

"Life must be defended at every moment of vulnerability. You can defend the immigrant and defend the unborn at the same time," he noted, "and until we learn to do that, we aren't as credible as we could be. The church has to learn to walk and chew gum at the same time."

The El Paso community — a largely Catholic, largely Mexican-American culture — has been living that message day by day, with a little help from the rest of the country.