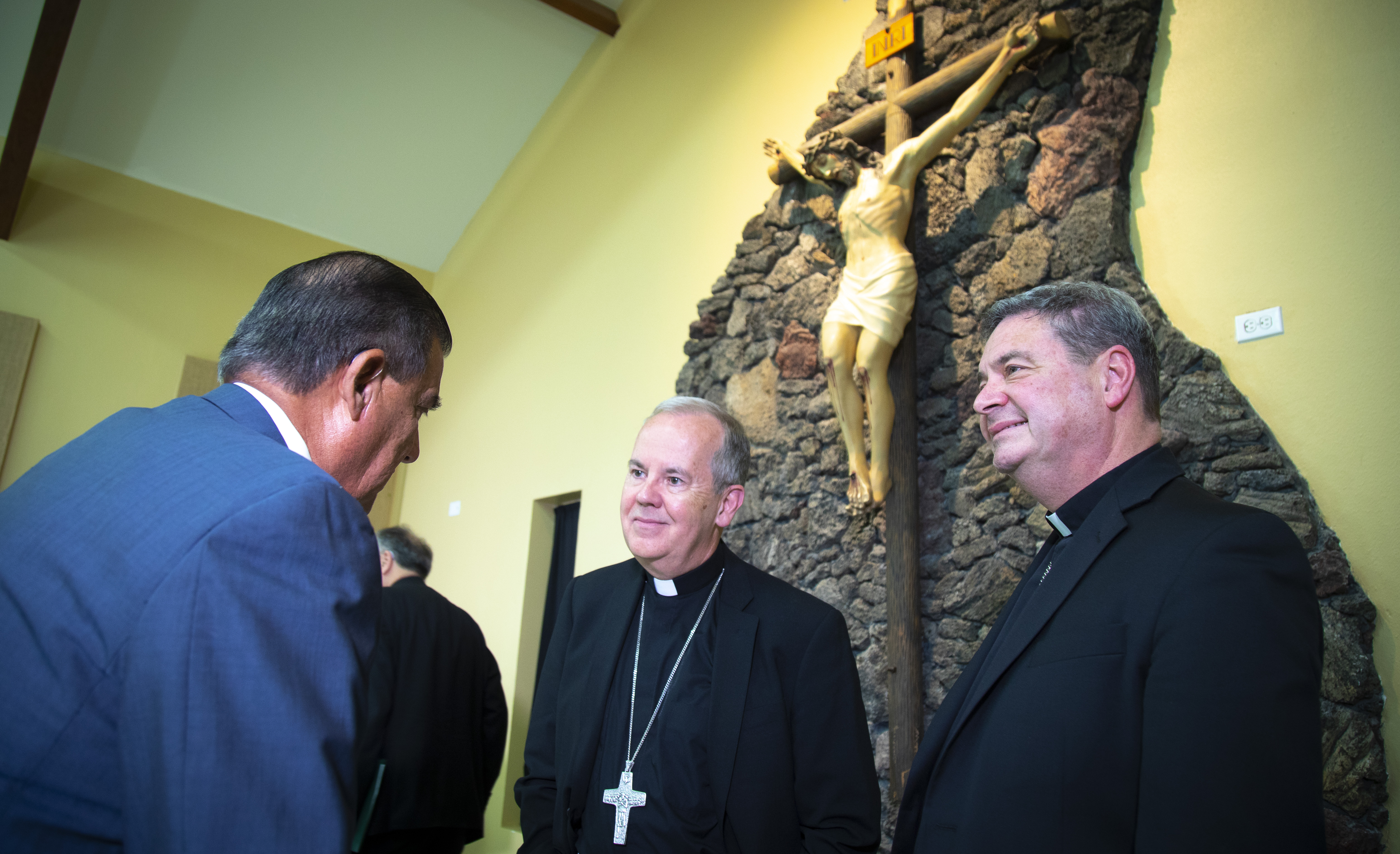 Bishop Joseph C. Bambera of Scranton, Pa., left, and Auxiliary Bishop Robert J. Brennan of Rockville Centre, N.Y., talk to a member of the media following a July 2 news conference at the Basilica of Our Lady of San Juan del Valle in San Juan, Texas. During the news conference, the bishops told reporters about the detention center for immigrants they visited earlier in the day in Brownsville, Texas. (CNS/Chaz Muth)

In less than 48 hours, a group of Catholic bishops saw the faces of triumph and relief from migrants who had been recently released by immigration authorities, but ended their two-day journey to the border with a more "somber" experience, visiting detained migrant children living temporarily within the walls of a converted Walmart.

During a news conference after the second and last day of their visit July 2, they stressed the "urgent" need to do something to help the children.

The separation for some of the children began shortly after U.S. Attorney General Jeff Sessions announced in early May that if migrants wanted to take their chances crossing the border illegally with their children, they faced the consequence of having them taken away — and he implemented a policy doing so.

Widespread outrage in the weeks following led to President Donald Trump essentially rescinding the policy in mid-June. But the stroke of the pen could not automatically reunite the children and parents who had been and remain apart.

"The children who are separated from their parents need to be reunited. That's already begun and it's certainly not finished and there may be complications, but it must be done and it's urgent," said Cardinal Daniel DiNardo of Galveston-Houston, president of the U.S. Conference of Catholic Bishops.

Archbishop Jose Gomez of Los Angeles, USCCB vice president, celebrated Mass in Spanish with about 250 children, including some of those in question, at the detention facility on what once was the loading dock of the Walmart superstore.

"It was, as you can imagine, very challenging to see the children by themselves," Gomez said during the news conference. "Obviously, when there are children at Mass, they are with their parents and families ... but it was special to be with them and give them some hope."

He said he spoke to them about the importance of helping one another.

The visit to the facility known as Casa Padre capped the bishops' brief journey to the border communities of McAllen-Brownsville near the southern border. Casa Padre, in Brownsville, gained notoriety earlier this year because it houses children separated from their families, as well as unaccompanied minors in a setting with murals and quotes of U.S. presidents, including one of Trump saying, "Sometimes by losing a battle you find a new way to win the war."

The facility is run by Southwest Key Programs, a nonprofit that operates it under a federal contract. In the afternoon, the bishops toured the Department of Homeland Security's Customs and Border processing facility in McAllen, where children are also detained.

Bishop Joseph Bambera of Scranton, Pennsylvania, along with Auxiliary Bishop Robert Brennan of Rockville Centre, New York, also were part of the delegation July 1 and 2, led by DiNardo, and were present at the Mass at Casa Padre.

The building houses about 1,200 boys ages 10 to 17, said Bambera, and though the care they receive seems to be appropriate — it's clean, they have access to medical care, and schooling and recreational facilities — it was clear that "there was a sadness" manifested by the boys, he said in a July 2 interview with Catholic News Service.

"We can provide the material environment to care for a person and it's provided there, but that doesn't nurture life. That takes the human interaction with the family or a caregiver," he said.

Though many of the boys held there are considered "unaccompanied minors," some were separated from a family member they were traveling with, said Bambera. And when you see them, "those boys bear clearly the burden of that" separation, he said.

Bambera said the boys listened intently during Mass and seemed to have a particular devotion and piety, one not seen in children that age. During Mass, "I saw a few boys wiping tears," he said.

DiNardo said at the news conference that the church supports the right of nations to protect their borders. But having strong borders and having compassion are not mutually exclusive, he said. A solution with compassion can be found, he said.

Bishop Daniel Flores, who heads the local Diocese of Brownsville, accompanied the delegation, which on its first day paid a visit to a humanitarian center operated by Catholic Charities.

Flores said there's a need to address the "push factors" driving immigration from Central America, a place where people are fleeing a variety of social ills, including violence, gangs and economic instability.

The U.S. border bishops have frequent communication with their counterparts in Mexico and Central America on variety of topics, he said during the news conference, but the problems driving immigration to the U.S. are complex.

He said he has spoken with parents in Central America about the danger of the journey but recalled a conversation with mothers in places such as Honduras and Guatemala who have told him: "My son will be killed here, they will shoot him and he's 16. What am I supposed to do?"

"These are extremely complex and difficult situations," he said. "This is a hemispheric problem, not just a problem on the border here."

DiNardo said the church was willing to be part of any conversation to find humane solutions because even a policy of detaining families together in facilities caused "concern."

He said the bishops gathered had floated around ideas for possible solutions and one of them included what's known as family case management, which connects the family with a case manager and someone to provide legal orientation. 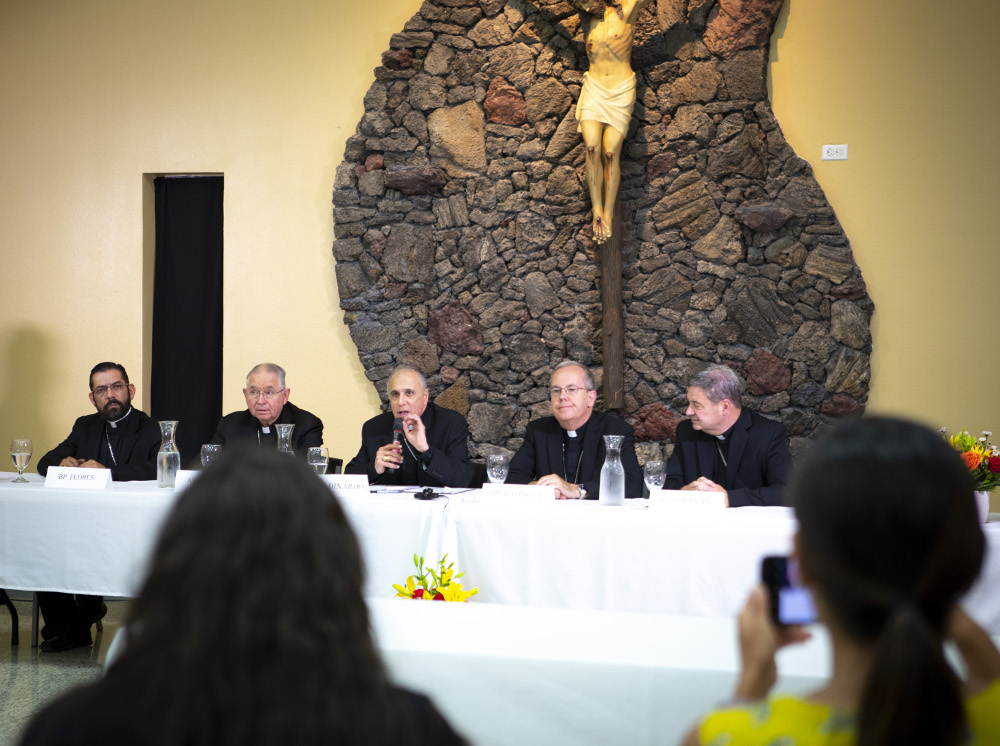 Cardinal Daniel DiNardo of Galveston-Houston, president of the U.S. Conference of Catholic Bishops, center, tells reporters about the detention center for immigrants he and his brother bishops visited earlier in the day in Brownsville, Texas, during a July 2 news conference at the Basilica of Our Lady of San Juan del Valle in San Juan, Texas. The rest of the delegation, pictured from left, are Bishop Daniel Flores of Brownsville, Archbishop Jose Gomez of Los Angeles, who is USCCB vice president, Bishop Joseph Bambera of Scranton, Pa., and Auxiliary Bishop Robert Brennan of Rockville Centre, N.Y. (CNS/Chaz Muth)

But almost exactly a year ago, the U.S. Department of Immigration and Customs Enforcement under the Trump administration ended such a program. Proponents had argued that it kept families together and had a great success rate in having adults show up to court dates.

Gomez said the Catholic Church was willing to help speed along the process of getting children back to their parents and to stop it from happening to others.

"I think if we want something from the administration, (it) is family unity," he said, because "that's essential for the human person. Whatever it takes, we're willing to help."

In an earlier interview with CNS, DiNardo had said that no matter what the outcome, the bishops' delegation had started out with the simple goal of supporting and being a presence for the migrants and the communities along the border caught in the middle of drama.

It was sentiment he repeated while closing up the news conference and the 48 hours that had clearly had an emotional effect on the bishops who participated. The bishops were not looking for villains during the trip, he said.

"Our visit is a pastoral visit. That has to be kept in mind," he said. "We have had a full two days and they've been a very beautiful two days, and, in some parts, painful, but very, very beautiful."

The bishops also had taken part in a mission, he said, handed on from the highest rungs of the church: to "share the journey" with migrants and refugees, referring to a campaign by Pope Francis and charitable Catholic organizations such as the U.S. bishops' Migration and Refugee Services calling on Catholics and others of goodwill to build bridges of understanding and hospitality with migrants and refugees.

"Pope Francis has invited us all on a journey with the migrant and refugee and we're glad we're part of the trip," DiNardo said.