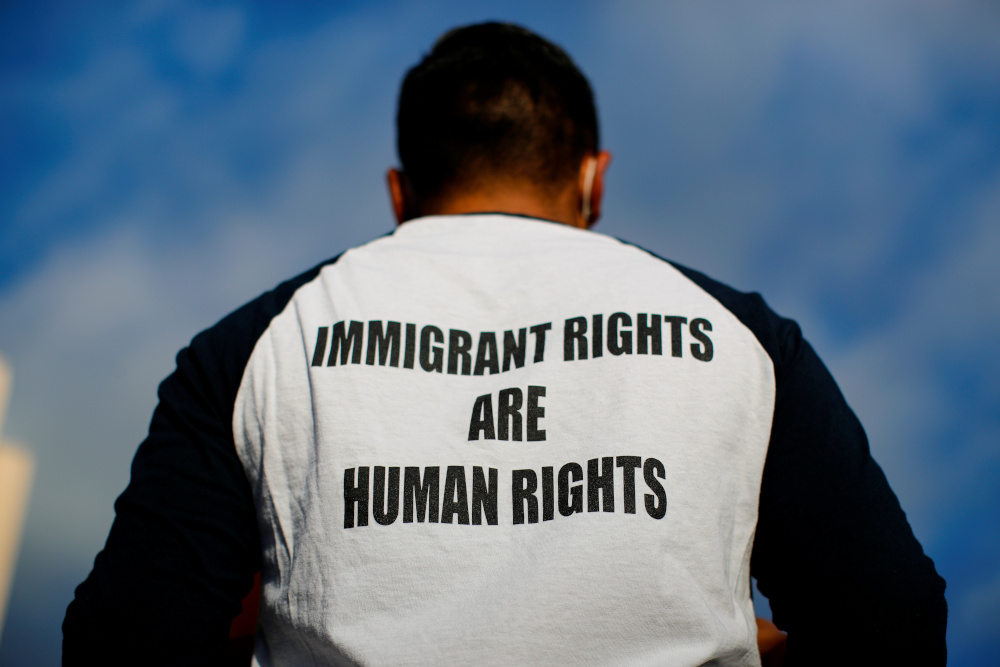 An immigration advocate is seen in San Diego June 18, 2020. Faith leaders July 21 criticized President Donald Trump for issuing a memorandum that aims to bar immigrants who are living in the country without documentation from being counted in the 2020 census. (CNS/Reuters/Mike Blake)

Democratic leaders and immigrant advocates are criticizing President Donald Trump's July 21 memorandum to prevent immigrants without legal documentation from being counted in the 2020 census for the redrawing of congressional districts.

The memorandum is expected to face legal challenges.

The president, who has challenged the census before, pushing for a citizenship question that was not included in this year's form, said that excluding "illegal aliens" from the 2020 census "reflects a better understanding of the Constitution and is consistent with the principles of our representative democracy."

His memorandum goes on to say: "My administration will not support giving congressional representation to aliens who enter or remain in the country unlawfully, because doing so would create perverse incentives and undermine our system of government."

Democratic leaders, the U.S. Conference of Catholic Bishops and immigration advocates took issue with this announcement many have said will not become policy, and they also questioned how the administration would accurately go about determining how many people to exclude from the data that impacts the redrawing of congressional districts.

A July 22 statement issued by the chairmen of two USCCB committees described the president's memo as "simply wrong and divisive." They urged Trump to rescind it and instead make "efforts to protect and heal our nation and all who are living in our country."

"Counting the undocumented in the census and then denying them and the states in which they reside their rightful representation in Congress is counter to the Constitution and a grave injustice," they said, adding that the policy also "makes people feel invisible and not valued as human beings."

"This is nothing but an unconstitutional and xenophobic attempt to weaponize the census to silence and scare immigrants. The immigrant community will not be silenced," tweeted Cabrini Immigrant Services of New York City July 21.

The Hope Border Institute tweeted: "The Constitution says the Census must count everyone, no exceptions."

It also said in a July 21 tweet that the "Trump administration's illegal attempt to politicize the #Census and do an end run around the Constitution to exclude certain folks would mean overlooking 1.6 million folks in Texas alone and the financial impact to the state would be incalculable."

"There is no end to Donald Trump's anti-immigrant agenda," said Tom Perez, chairman of the Democratic National Committee. House Speaker Nancy Pelosi, D-California, called the memo "unconstitutional," adding in a statement that Trump's plan is "designed to again inject fear and distrust into vulnerable and traditionally undercounted communities, while sowing chaos with the census."

She said the House will "be vigilant to ensure a full, fair and accurate census and continue working to guarantee maximum participation and inclusion so that every person in every community is counted."

The Census Bureau announced in June that more than 90 million households had already responded to the census, primarily online. Prior to the sending out this year's forms, the agency called on religious leaders around the country to spread the word about the count and to encourage participation in it to ensure that all communities benefited from an accurate count.

Just over a year ago, the Supreme Court blocked the administration's attempt to add a citizenship question to the 2020 census, saying the reason given for adding the question – to help enforce voting rights –  seemed contrived.

U.S. bishops praised the court's 5-4 decision, saying: "All persons in the United States should be counted in the census regardless of their immigration status." They also reiterated a previous bishops' statement on the issue by stressing that "questions regarding citizenship should not be included in the census. We hope that this view will prevail, whether by administrative action or judicial determination."

The census is rooted in the text of the Constitution, which requires an "actual enumeration" of the population every 10 years. It determines federal funding for roads and schools, congressional districting and the number of House representatives.