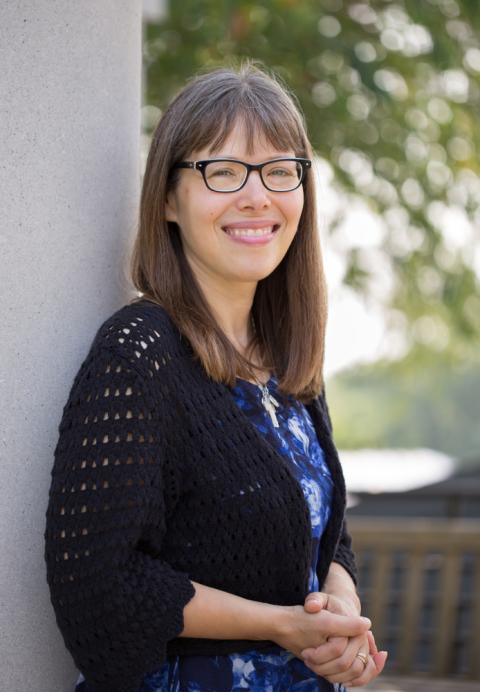 Dawn Eden Goldstein, pictured in 2014, is an assistant professor of dogmatic theology at Holy Apostles College and Seminary in Cromwell, Conn. She has written about finding healing after suffering sexual abuse as a child. (CNS/courtesy Dawn Eden Goldstein)

With allegations of past sexual abuse made against Archbishop Theodore McCarrick and questions raised about why his behavior was never addressed by church leaders, there has been a lot of talk about what went wrong and the steps church leaders should take to bring about healing and regain trust.

The discussion has only been heightened by the Aug. 14 release of a grand jury report on the investigation into abuse claims spanning a 70-year period in six Pennsylvania dioceses that showed more than 300 priests were linked to abuse claims by more than 1,000 victims.

Regarding McCarrick, dozens of bishops have issued statements addressing the allegations and the need to find out who knew, and didn't do anything about, the archbishop's actions. Many also have expressed frustration, anger and sorrow for what happened and apologized to Catholics for ways the church has failed them.

And after the release of the grand jury report, several bishops issued statements of remorse for what happened and the U.S. Conference of Catholic Bishops said: "As a body of bishops, we are shamed by and sorry for the sins and omissions by Catholic priests and Catholic bishops."

But what has been missing from these statements, according to an author and seminary theology professor, is an acknowledgment by the body of bishops of wrongdoing.

"What is needed right now is for the bishops — all the bishops as a body — to apologize to the faithful, and as a body, to promise personal reparation," Dawn Eden Goldstein told Catholic News Service, in July, about the allegations against McCarrick.

Goldstein, who goes by the pen name Dawn Eden, is an assistant professor of dogmatic theology at Holy Apostles College and Seminary in Cromwell, Connecticut, and has written about finding healing after the sexual abuse she suffered as a child.

In the wake of allegations against the former cardinal, she said, Catholics want transparency and leadership but primarily they want justice.

She said this means the bishops need to acknowledge they caused scandal and "didn't have the moral courage" to stand up to McCarrick. Eden said she doesn't doubt that many bishops didn't know of the situation and some may have even tried to do something to stop it, but they still should "act collegially" and "collectively have to make reparation."

She reiterated this message in an Aug. 9 column in the Catholic Herald, a weekly publication based in London, stressing that the bishops need to do public acts of penance for "the sins of bishops and all clerics" and "those who enabled or failed to act against such wrongdoers."

"All the faithful need to examine themselves and repent of their role in failing to protect others, whether minors or adults, from clerics who abused their power. But if such repentance is to have its proper effect, leading to reparation and conversion of life, it needs to be modeled by those entrusted with governing the faithful," she wrote.

She said this action would show the bishops understand that the "sins of shepherds have a particularly destructive impact upon the entire church" and that "if even one bishop is guilty, the entire college (of bishops) owes reparation to God" to begin the healing process.

In an Aug. 14 email to CNS, she said that in light of the grand jury report, the call for public penance she has spoken about is "needed as an integral part of a larger effort on the part of the U.S. bishops to acknowledge wrongdoing on every level."

She noted that many Catholics are "calling for resignations from bishops who have been publicly identified as having covered up for abusing priests or for McCarrick. But resignations will not be enough to restore the public trust unless they are accompanied by collegial episcopal acts of penance."

The idea of "collegial penance" isn't a new one but was suggested in the spring of 2002 during a U.S.-Vatican summit on clerical sex abuse. One of the actions proposed by the U.S. prelates "was to declare a day of prayer and penance throughout the United States to implore reconciliation in church life." And at the bishops' meeting in June that year, they chose Aug. 14 and 15 as days of prayer and repentance for their failures to prevent priests from sexually abusing minors and invited Catholic priests and laypeople across the country to join them.

Eden, quoting "The Politics of Penance," a 2016 book by theologian Michael Griffin, said "just a handful of bishops followed through" with public observances of penance, which the USCCB made optional.

In 2016, Pope Francis asked episcopal conferences around the world to observe a "Day of Prayer and Penance" for survivors of sexual abuse within the church. The USCCB marked this at the start of their spring meeting that year at a June 14 Mass at SS. Peter and Paul Cathedral in Indianapolis.

But the bishops' recommended "Prayer for Healing and Reconciliation," Eden said, focused on " 'those' people who caused pain, rather than themselves."

On a diocesan level, she wrote, "a bishop's penitential act might be a Mass and Holy Hour, or it might be repenting in sackcloth and ashes outside his cathedral. But it should be public, and it should include the clearly stated intention of making reparation as a bishop on behalf of the apostolic college to which he belongs."

Eden has written about finding personal healing through the examples of the saints, which she writes about in her book: "My Peace I Give You: Healing Sexual Wounds With the Help of the Saints."

When she spoke to CNS last year about how the church could play a role in the #MeToo movement, she said the saints show a path forward for the country's current crisis because they were "bold and courageous in speaking the truth and speaking when they saw people being abused and oppressed in any way."

They also practiced mercy and justice and didn't see a conflict between the two.

For example, St. Maria Goretti — an 11-year-old Italian girl stabbed in 1902 while resisting a sexual assault — forgave her assailant on her death bed, but she also gave a detailed description of what happened to her to the police.

Eden said St. Maria Goretti, canonized in 1950, is the "model we need to follow" because she shows those who suffer "that to forgive is in no way to excuse the abuser."