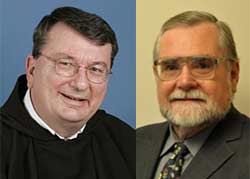 Back in 1993, then-Cardinal Joseph Ratzinger gave an address in Hong Kong to the presidents of Asian bishops’ conferences on Christology, meaning the church’s teaching about Christ. Ratzinger criticized trends in contemporary theology that he believed gave too much away for the sake of accommodating religious diversity, and a footnote cited the work of Belgian Jesuit theologian Jacques Dupuis.

At that stage, Ratzinger’s footnote was no more than a scholarly citation, yet it signaled that Dupuis was on the radar screen of the church’s doctrinal authorities. For those paying attention, it thus came as little surprise that eight years later, Dupuis was subject of a critical Vatican “notification.” (Dupuis died in 2004.)

Right now, the memory of that episode might make Terrence Tilley, a Fordham theologian and past president of the Catholic Theological Society of America, shudder.

In the most recent issue of the Quarterly of the Fellowship of Catholic Scholars, Capuchin Fr. Thomas Weinandy, executive director of the U.S. Bishops’ Secretariat of Doctrine, subjects Tilley’s presidential address to the CTSA last June to a withering critique – in effect, suggesting that it offered clever rhetoric masking “doctrinal ambiguity and error.”

This story was updated Dec. 5 An Exchange between Terrence Tilley and Fr. Thomas Weinandy

In very broad strokes, the CTSA is often perceived as leaning to the left in Catholic debate, while the Fellowship of Catholic Scholars has a reputation as more conservative.

Weinanday’s essay was affixed with a note that his views “do not necessarily reflect any position of the United States Conference of Catholic Bishops.” Of course, it’s also not quite the same thing to be targeted by a staffer for the U.S. bishops as to be singled out by the Vatican’s doctrinal czar and a future pope.

At the moment, there is no reason to believe that either Tilley or the CTSA is likely to face any sort of official investigation or reprimand. At a minimum, however, Weinandy’s essay is a reminder of the deep divides within the theological community, as well as the sometimes uneasy relationship between the church’s doctrinal authorities and its theological guild.

Though the disputes involved are complex, as with Dupuis the heart of the matter is Christology. The title of Weinandy's essay suggests that Tilley's views lead to "the demise" of the doctrine of the Incarnation, meaning that Christ was both fully God and fully human -- a charge that Tilley denies.

One core point concerns method. Tilley suggests that contemporary theologians are doing what earlier church fathers and councils did: Finding ways to express who Christ was in ways relevant to their cultures and times, without betraying the content of the faith. Weinandy, on the other hand, insists that classic doctrines aren’t “models,” but rather “a true ontological account of the mystery, one that can be known and believed.”

In effect, Weinandy accuses Tilley of a kind of relativism.

Another bone of contention is the exercise of ecclesiastical authority. Tilley criticizes what he calls “star-chamber tactics and political sanctions” from the Vatican’s Congregation for the Doctrine of the Faith in attempting to stifle theological reflection, while Weinandy says that when the Vatican criticizes a theologian, it always does so “in a scholarly, respectful and professional manner.”

The full texts involved can be found here:

Earlier NCR reporting on Tilley's address to the theolical society: