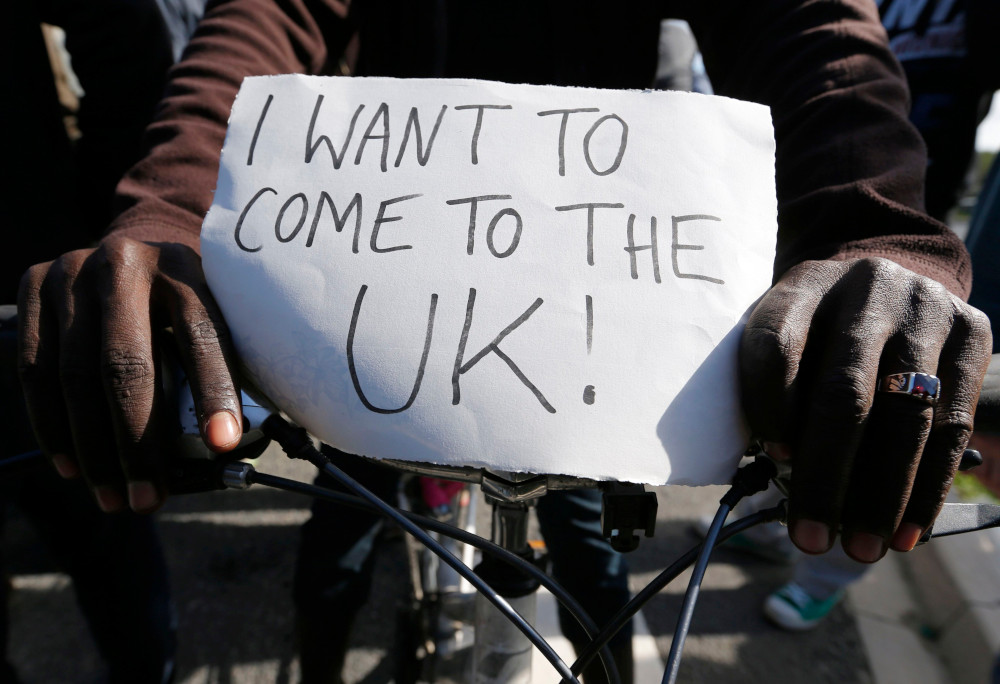 A migrant holds a placard that reads "I want to come to the U.K." on his bicycle at the makeshift camp called "The New Jungle" in Calais, France, in this 2015 photo. The bishops of England, Wales and Scotland have criticized 2021 reforms to Britain's asylum system, saying proposals to make entry into the country more difficult will encourage human trafficking. (CNS/Reuters/Regis Duvignau)

Catholic bishops have warned the British government that post-Brexit plans to tighten the asylum system would drive more immigrants into the hands of human trafficking gangs.

"Creating arbitrary divisions based on people's method of entry will have profound implications for those who need our support most," said a letter to Home Secretary Priti Patel from Auxiliary Bishop Paul McAleenan of Westminster, lead bishop for migrants and refugees of the Bishops' Conference of England and Wales, and Bishop William Nolan of Galloway, chair of the Scottish Bishops' Commission for Justice and Peace.

The government unveiled proposals May 10 for a points-based system of asylum, intended to permit migration of skilled workers and people who are fleeing persecution. The "New Plan for Immigration" would make it much harder for migrants to remain in the U.K. if they have entered illegally or from a safe country such as France or Belgium.

In their May 10 letter, the bishops said tougher border security and a less-generous asylum system "risk driving more people into the hands of criminals."

"We believe in tackling trafficking through combining a strong response to organized crime, with the opening of more safe and legal routes to sanctuary, while ensuring that victims are never criminalized," the bishops said.

"Creating arbitrary divisions based on people's method of entry will have profound implications for those who need our support most," they said.

"We know that many families and individuals have no choice in the route that they take, and to penalize them on this basis dangerously undermines the principle of asylum. We oppose any move to treat differently those forced to risk their lives or make difficult journeys to reach safety and those who are selected for organized resettlement routes."

The bishops said that how people respond to those in need has societal implications.

"We must keep in mind that welcoming successive generations of refugees has greatly enriched our communities. It is therefore imperative that we continue to make room for people who seek safety and a home among us in the U.K."

Britain's withdrawal from the European Union, following the Brexit referendum of 2016, took full effect Dec. 31, allowing the country to pass its own laws on asylum and immigration.

Under the new proposals, the government would seek to return migrants to the West European countries from which they have arrived on the basis that migrants were already in a safe country and not in danger of persecution. Those migrants who cannot be deported immediately will be placed in a No Recourse to Public Funds category, meaning they will be denied financial benefits and state support.

The government has stated that the purpose of the new policy is to establish a "fairer immigration that strengthens the United Kingdom's borders and deters criminals who facilitate dangerous and illegal journeys."

About half of all asylum-seekers reach the U.K. through "unauthorized routes," increasingly taking risks to cross the English Channel from France on small boats.