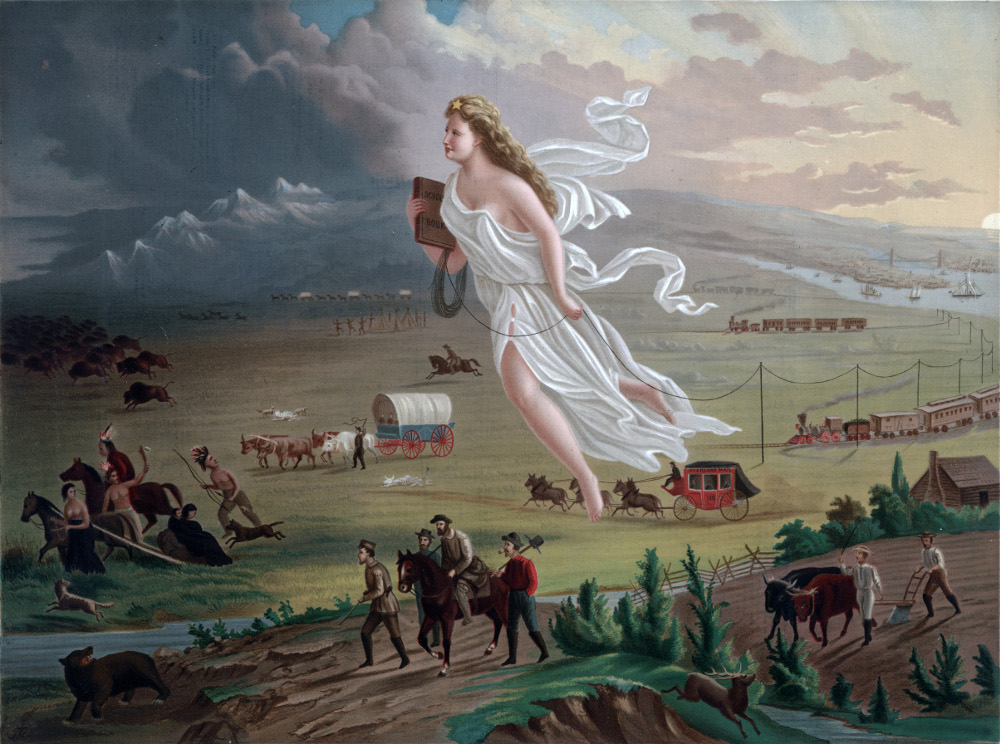 An 1872 painting called "Spirit of the Frontier" by John Gast illustrates the United States' notion of "manifest destiny," with white settlers, guided by Columbia, moving west and driving out Native Americans and bison. (Wikimedia Commons/Library of Congress) 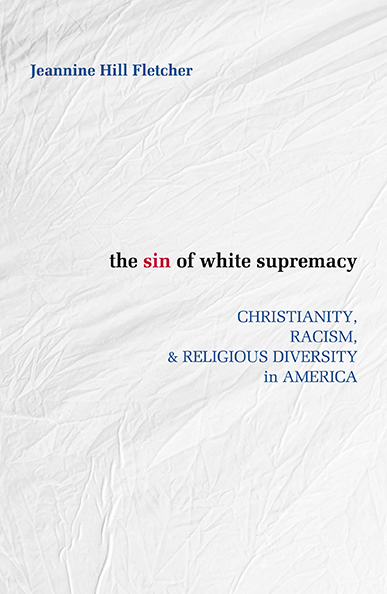 Never for a moment did I buy the notion that with the election of Barack Obama as president, the United States had become a "post-racial" society. But even for a skeptic like me, the statistics from the 2016 presidential election were difficult to absorb: Eighty-one percent of white evangelical Christians and 60 percent of white Catholics voted for Donald Trump. How could Christians vote for such an unabashedly racist candidate?

As we attempt to answer that question, it's hard to imagine anything timelier than Jeannine Hill Fletcher's new book. In The Sin of White Supremacy: Christianity, Racism, & Religious Diversity in America, Hill Fletcher draws on her expertise in interreligious theology as well as extensive research into the history of Euro-American Christianity to lay out the devastating connections between Christian theology and the ideologies of racial supremacy that underpin our current political crisis.

Then, thank God, she presents a theological paradigm to help us move toward racial and religious transformation.

Hill Fletcher begins by tracking what she designates as not merely "white" but "white racism back well before the beginning of slavery, to the inscription of Christian supremacy — 'no salvation outside the Church' — into third-century Christian theology, the Crusades, and Columbus's 'discoveries.' "

Then, in our own "Christian" nation, white college presidents, professors, legislators and clergy went on to apply this supremacist worldview to social and economic systems. And while white racist discourse may be less explicitly Christian today than it once was, Hill Fletcher explains that the "theo-logic" of Christian supremacy — the claim that Jesus Christ is the "only-begotten Son of God" — still supports the racist judgment that some humans are intrinsically superior to others.

The primary function of this Christian white supremacist ideology was, and is, to justify the material dispossession of non-white people. This is so powerfully the case that Hill Fletcher describes it, following the work of James Perkinson, as a form of witchcraft. Whether it is through slavery, manifest destiny, the exclusion of indigenous students from land-grant universities, the Chinese Exclusion Act or the redlining of people of color from home ownership, the white supremacist racial hierarchy in the U.S. shapes virtually everything.

So fundamental to this witchcraft are the ideas — the "symbolic capital" — of Christian theology that nothing less than a serious reconfiguration of that theology can transform our racially unbalanced world.

At the heart of such a theological rebalancing is the reality of God as mystery, a mystery portrayed in the profoundly relational narratives of the Gospels. For John, the heart of that narrative is relational intimacy. For Mark, it is healing: Jesus choosing the healing of the suffering over wealth or power. For Matthew, however, Jesus' call to love is even more demanding: We must take up our cross and follow him. Love in Luke's Gospel is perhaps the most daunting of all: Like the good Samaritan, we must love even our enemies, those others beyond kinship and tribe.

How do we follow Jesus when our very relationship to him is haunted by the history of white Christian racism?

Hill Fletcher then draws on this relational narrative of divine mystery to answer the most devastating of questions: How do we engage in such love "after the witchcraft of White supremacy … when White Americans enjoy the benefits of exploitation and people of color continue to bear its weight?"

How do we follow Jesus when our very relationship to him is haunted by the history of white Christian racism?

Drawing on this paradigm, Hill Fletcher in her final chapter lays out creative actions that we, as the killers of Jesus as well as of his beloved sisters and brothers, can undertake to transform this racially crucified world.

The Sin of White Supremacy is a devastating, timely and well-crafted study. However, no book is without limitations. In this case, I fear that Hill Fletcher's critique of Christian supremacy, and of the teaching of Christ's uniqueness on which it is based, may prove unhelpful, or even hurtful, to many of the large percentage of African-Americans and sub-Saharan Africans who are Christians. For them, the truth of the Christian faith and the uniqueness of Christ — Christ as the "only begotten Son of God" — may well provide a crucial support in their struggles against racism and oppression. How ironic would it be if a white Christian theologian, out of a desire to combat racism, inadvertently undercut beliefs that are foundational for black Christians?

My other concern about the book is its primary emphasis on words — "symbolic capital" — as the cause of white racism. Hill Fletcher shows, incontrovertibly, that the words of Christian theologians, college presidents, professors and legislators contributed enormously to the white supremacist worldview that underpins U.S. racism. And she provides a great deal of valuable information about the material harms of white supremacist discourse.

But when she argues that "words create worlds," as she does in her third chapter, she risks obscuring the extent to which the material world also drives the production of words and ideas. However much Christian theology justified African enslavement, profit also strongly motivated the wealthy to make use of that theology to justify slavery, and immigrant peasants dispossessed of their land to express those losses in horizontal racial violence.

These two concerns notwithstanding, Hill Fletcher's arguments in The Sin of White Supremacy, and especially her presentation of the Crucified One as the transforming theological paradigm of love in a white racist world, could not be more needed. May white Christians across the United States embrace these ideas and spread them widely as we move toward the important elections that are coming.

A version of this story appeared in the Aug 24-Sept 6, 2018 print issue under the headline: Crucified by racism.