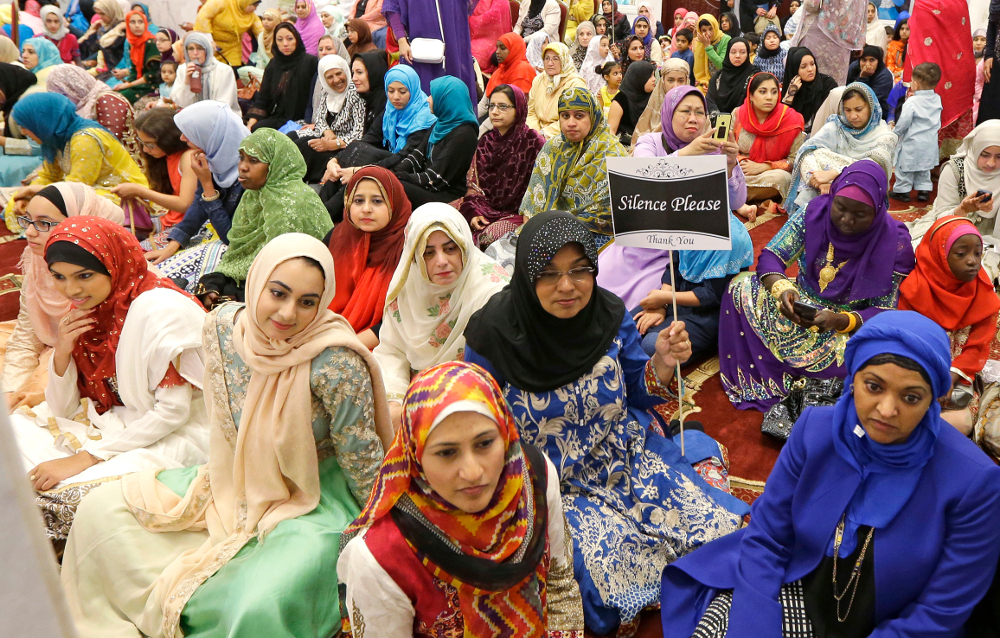 Women listen to a speaker during a prayer service at the Muslim Association of Puget Sound Redmond Mosque in Redmond, Washington, to mark the end of Ramadan and the start of Eid-al-Fitr, July 6, 2016. (AP/Ted S. Warren) 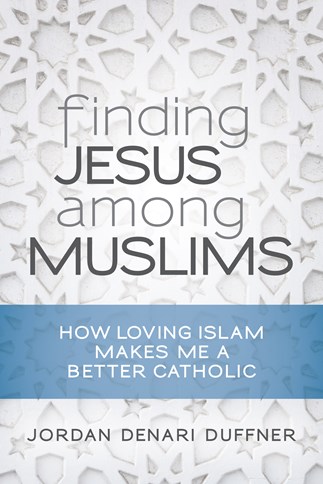 Earlier this year while on a train in Europe, I sat down across from an Arabic-looking man who began reading the Quran. My immediate first reaction was apprehension and fear. My immediate second reaction was to check my implicit yet real bias for what it was, Islamophobia.

Most striking to me was this incident happened just a few days after I had finished a book on Muslim-Christian relations that addressed these implicit biases to which Catholics like myself are prone. It is precisely because these biases are so ingrained and because Islamophobia is on the rise that Finding Jesus Among Muslims: How Loving Islam Makes Me a Better Catholic by Jordan Denari Duffner is such an important and timely resource.

Written primarily for a Catholic audience, the book explores present relations between Christianity and Islam. It does so, however, through the lens of Duffner's lived experiences with Muslims and the ways in which encountering Islam has helped her find Jesus anew. She never intends the book to be a comprehensive analysis or work of systematic theology. Rather, in her words, Finding Jesus Among Muslims should act as a "facilitator of dialogue." The book raises more questions than it answers, encouraging readers to go forth and learn more. The author's rich commitment to Muslims and demonstrated courage in entering vulnerable, liminal spaces inspire readers to become active participants in dialogue.

There is a particular urgency for Catholics to become participants in dialogue with Muslims who are being attacked for their faith in the U.S. and abroad. Duffner succinctly explains how very real and damaging anti-Muslim prejudices in the U.S. are, noting, "In recent years, people have broken into mosques and ripped up Qur'ans, spray-painted vulgar language on the exterior of buildings, shot bullets into signs, and left pig heads, bacon and even feces on the property." These acts are accompanied by threats of other violence, arson attacks on mosques and even murder.

What has the Catholic response been to these evils? Unfortunately, dialogue and solidarity with our Muslim siblings is largely absent, despite being a mandate of discipleship. A report from The Bridge Initiative at Georgetown University, which researches Islamophobia, found 70 percent of U.S. Catholics do not know a Muslim personally and just 14 percent have a favorable view of Islam. Few Catholics grasp what the magisterium actually teaches about Islam and about interfaith dialogue generally. As Islamophobia soars in the U.S., the people of God remain collectively silent.

Finding Jesus Among Muslims is clear that such failure is neither a given nor an insurmountable obstacle because the possibility for dialogue always exists. Though religious leaders and theologians are significant figures in interfaith efforts, it is not their exclusive domain. Each person is capable of being involved in what Duffner calls the "dialogue of life" or, more simply, participation in the daily encounters that happen between Christians and people of other faiths.

Duffner explores Catholic-Muslim relations through the lens of her own experiences with the "dialogue of life." She blends personal narrative with catechesis to break open topics such as why such interfaith work is a vocation for every Catholic, what Islam is (and is not) really about, and how knowing Muslims has deepened Duffner's faith in Jesus. She moves seamlessly between anecdotes from her life and introducing the tenets of Islam, between other Catholics' experiences with Muslims and relevant church teachings.

Duffner roots the book in magisterial teaching, frequently citing the documents of Vatican II and the writings of Pope John Paul II and Pope Francis (with the telling omission of Pope Benedict XVI, whose most famous engagement with Islam was his incredibly damaging Regensburg address in 2006). For the Catholic who is skeptical or worried about interfaith dialogue, this grounding provides clear proof that the institutional church fully affirms such efforts.

But left unaddressed is a critical appraisal of episcopal praxis, especially in the U.S. context from which and about which Duffner primarily writes. Despite severe infringements on Muslims' religious liberty since 2001, the U.S. Catholic bishops' partisan Fortnight for Freedom campaigns have focused almost exclusively on the false perception that Catholics' religious liberty was under attack.

During the 2016 election campaign, presidential candidate Donald Trump threatened a "total and complete shutdown" of Muslims entering the U.S. (a promise that, so far, he has made good on). Not a few U.S. bishops dog-whistled their support for a candidate who preached vile Islamophobia. Recognizing this sharp dissonance between magisterial teaching and U.S. church leaders' blemished record would have improved Finding Jesus Among Muslims. 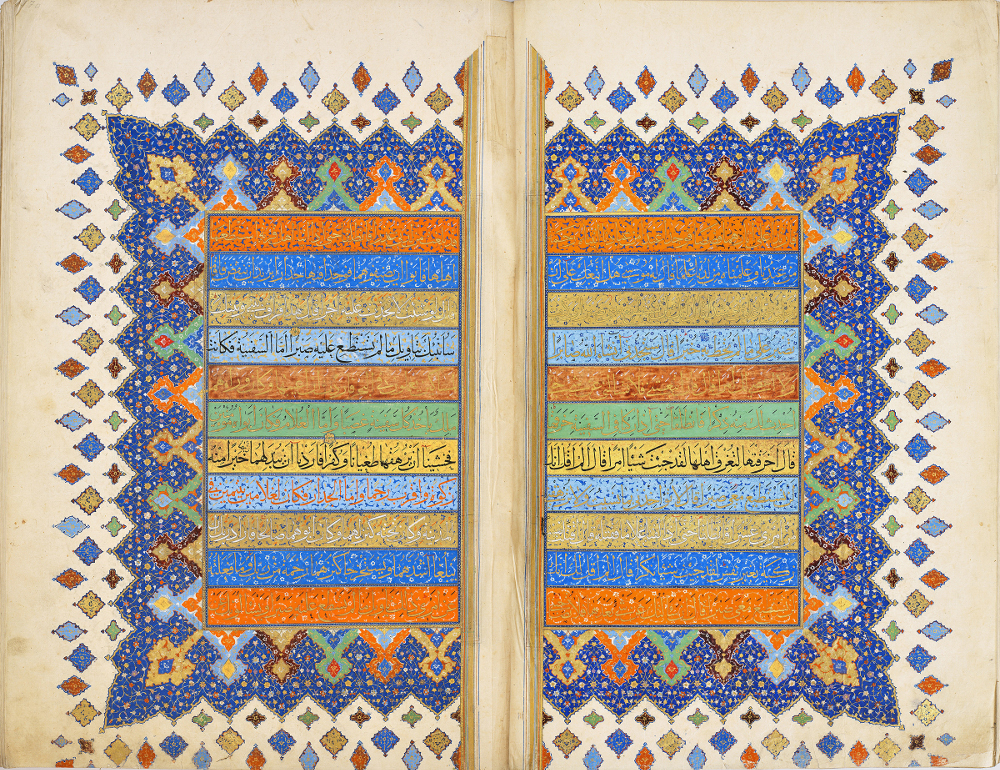 Single-volume Quran copied by Abd al-Qadir ibn Abd al-Wahhab, who worked in what is now Iran in the 16th century (Courtesy of Smithsonian Institution)

Overall, the book walks the line well between being accessible to the ordinary Catholic while not shying away from the complexities of interfaith relations. Writing about her relationships with Muslims, Duffner sets a conversational tone. Sharing about having tea with strangers in Jordan or listening to a Muslim friend's fears after the 2016 election makes clear how relational and accessible interfaith dialogue really is. This approach produces a book that is warmly inviting about a topic many people find intimidating. Nowhere does this tone or style undercut the seriousness of the topic or Duffner's expertise. One criticism, though, is that the book may be too optimistic at points, as when she writes that "theological differences are thin, almost invisible."

The book is also inviting because of Duffner's honesty and vulnerability. Though a scholar and experienced practitioner of dialogue, she acknowledges that she is still dismantling her own implicit biases.

Duffner also shares the theological questions with she still wrestles with and the doubts she has had about her own Catholic faith. Rather than undermining her credibility, however, these admissions strengthen the book's argument that the task of dialogue is ongoing and lived out daily.

Today, Islamophobia widely afflicts U.S. Muslims, and our nation's imperialism is ravaging Muslim communities abroad. It is time for U.S. Catholics to own our complicity in this oppression and to answer God's call to be a people of God in dialogue and solidarity with our Muslim siblings. Reading Finding Jesus Among Muslims can be a timely resource to help us enter "the dialogue of life" and, in turn, can be a very meaningful first step in transforming God's vision into our reality.

[Robert Shine advocates for a just and inclusive Catholic Church. For more on his writing and work, visit robertgshine.com.]

A version of this story appeared in the Aug 10-23, 2018 print issue under the headline: Interfaith dialogue really is relational, accessible.