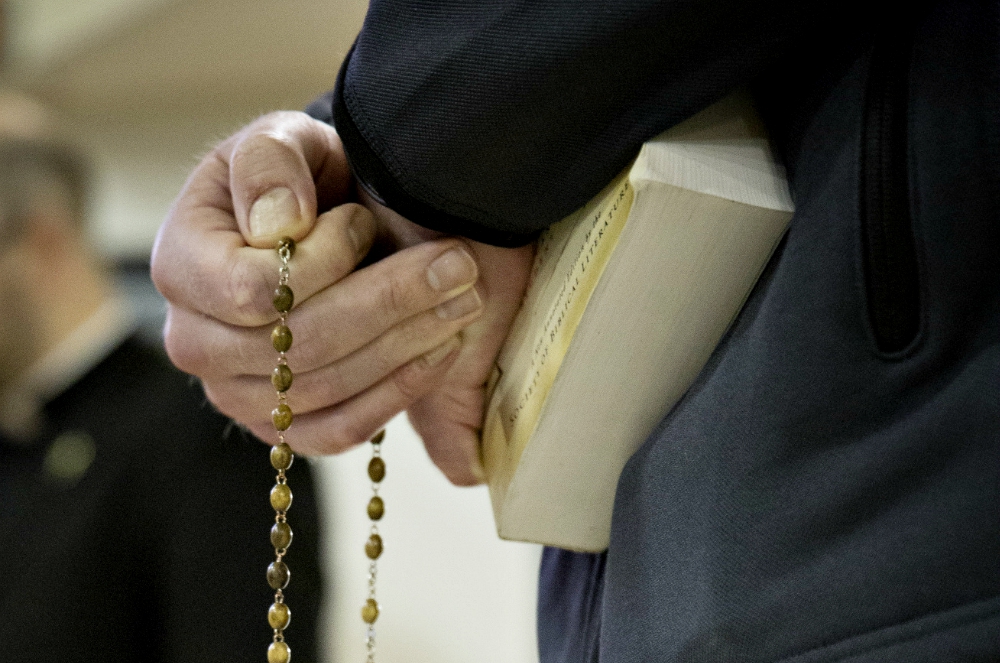 A seminarian from St. John's Seminary in Brighton, Massachusetts, holds a rosary before a discussion with a youth group in 2016. (CNS/Chaz Muth)

This story was updated Aug. 15 at 2:15 p.m. Central Time with information about Boston Cardinal Sean O'Malley's canceled appearance at the World Meeting of Families in Dublin.

Two U.S. bishops opened investigations this month following a series of online allegations reporting sexual misconduct, excessive alcohol abuse and behavior unbefitting the priesthood among seminarians and by those overseeing their development.

In Boston, the accusations involved St. John's Seminary in Brighton, Massachusetts, with two former seminarians alleging a culture of heavy drinking and illicit sexual behavior among students and with faculty. The other probe focuses on Lincoln, Nebraska — regarded as perhaps the most orthodox diocese in the country — where a series of allegations have emerged, including against a popular, now-deceased vocations director accused of making sexual advances while having seminarians help him shower.

Boston Cardinal Sean O'Malley announced in an Aug. 10 statement that he commissioned an inquiry into St. John's concerning allegations of "activities which are directly contrary to the moral standards and requirements of formation for the Catholic priesthood."

He also asked the seminary rector, Msgr. James Moroney, to take an immediate sabbatical leave for the fall semester while the investigation plays out. Fr. Stephen Salocks, a professor at the seminary, is serving as interim rector.

"The allegations made this week are a source of serious concern to me as Archbishop of Boston," O'Malley said. "The ministry of the Catholic priesthood requires a foundation of trust with the people of the Church and the wider community in which our priests serve. I am determined that all our seminaries meet that standard of trust and provide the formation necessary for priests to live a demanding vocation of service in our contemporary society."

The Boston Archdiocese announced Aug. 15 that O'Malley would no longer attend the World Meeting of Families later this month due to "important matters pertaining to the pastoral care of St. John’s Seminary" and its seminarians which "require the Cardinal's personal attention and presence." The cardinal, who serves as chair of the Pontifical Commission for the Protection of Children, was set to moderate a panel on safeguarding children and vulnerable adults; the archdiocese said he would "closely follow the proceedings" from Boston.

The inquiry at St. John's is being undertaken by Auxiliary Bishop Mark O'Connell; Francesco Cesareo, president of Assumption College in Worcester and head of the U.S. bishops' National Review Board; and Kimberly Jones, CEO of Athena Legal Strategies Group, a crisis management firm. Mark Dunderdale, director of the Archdiocesan Office of Professional Standards and Oversight, is assisting that committee.

O'Malley directed the group to submit its findings and recommendations "as soon as possible," and has instructed the faculty, students and staff at St. John's to "fully cooperate with the inquiry."

He added, "At this time I am not able to verify or disprove these allegations."

In a series of tweets Aug. 1, John A. Monaco recounted his "Catholic #MeToo moment," describing his experience as a student at two East Coast seminaries, where he encountered alleged sexual advances, heavy drinking and rumors of sexual misconduct.

He expanded on his story days later on his Medium page, at OnePeterFive.com and on ChurchMilitant.com, the latter where he identified the two seminaries: St. John's, the major seminary he attended from 2014 to 2016, and St. Charles Borromeo Seminary in Wynnewood, Pennsylvania, part of the Philadelphia Archdiocese, where he spent the 2010 academic year.

Monaco said he was inspired by the #MeToo movement and recent revelations about former Cardinal Theodore McCarrick to tell his story.

"I absolutely love the Catholic Church, and it is for that reason that I say #ChurchToo," he wrote on Medium. "True love is not found in hiding abuse, tolerating misconduct, or in protecting abusers."

Monaco said while at St. John's he and other seminarians received text messages "asking to 'hook up' " from an anonymous phone number they later discovered were from a fellow seminarian. When he and others reported that seminarian, Monaco said, no action was taken.

He also described alcohol abuse among seminarians and faculty, saying, "There were priests on faculty who would get drunk with their 'clique' of seminarians, and would invite them into their rooms late at night for 'private parties.' " He also witnessed seminarians "cuddling" in a common room.

Monaco, who mainly kept to himself throughout his time in seminary, said he began to become more isolated, and eventually the St. John's rector paid for him to see a therapist. He left St. John's in spring 2016.

His experience there followed his time at St. Charles Borromeo Seminary, where at an off-campus party he said he was groped by another seminarian and pressured to drink underage, and where an older seminarian, asking how Monaco was adjusting to seminary life, made sexual advances on him in his room.

A second former St. John's seminarian, Andrew Solkshinitz, posted a week later on the archdiocese's Facebook page affirming Monaco's account of the seminary, according to The Pilot, Boston's archdiocesan newspaper.

The Pilot reported that Solkshinitz later wrote on his personal Facebook page that while at St. John's another student "propositioned" him, and that his concerns were dismissed when he shared them with his vocations director and vice rector. The post no longer appears on Solkshinitz's Facebook page. Solkshinitz wrote on Aug. 11 that he has been in contact with O'Connell "and will be working with the committee to help clean the seminary system. ... I hope that my openness will help inspire others in the pursuit of the truth." 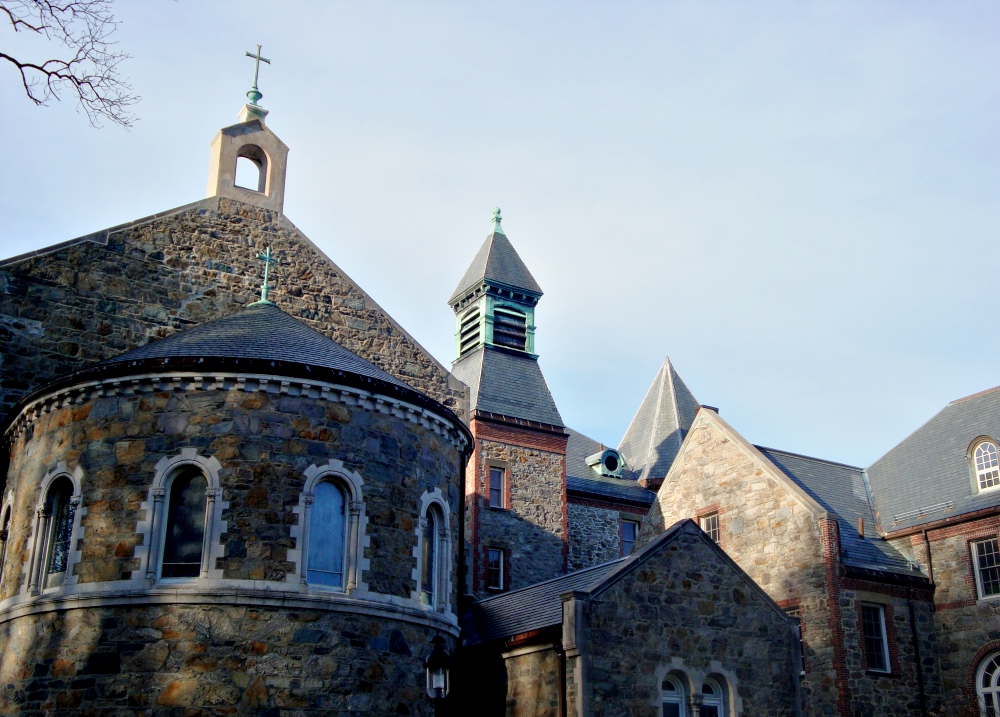 Conley, who had pledged greater transparency earlier this month regarding allegations against priests, celebrated Masses the weekend of Aug. 4-5 at St. Peter Church in Lincoln and held a town hall meeting there Aug. 6 with 500 people. The parish's former pastor, Fr. Charles Townsend, was removed in 2017 by Conley following a report the priest "developed an emotionally inappropriate, non-sexual relationship with a 19-year-old male which involved alcohol." The bishop sent him to the Shalom Center treatment facility for clergy and religious in Splendora, Texas.

The diocese reported Townsend's case to local authorities in early August. Both civil and church investigations remain ongoing. Conley has refuted claims that he covered up the Townsend incident but admitted, "I did not encourage transparency."

In his Aug. 10 letter, which was read during a listening session that day at St. Wenceslaus Church in Wahoo, Conley said that in addition to Townsend's case, the diocesan review board was looking at least four other cases involving "priest wrongdoing."

Among the priests who were being reviewed were:

The accusation against Benton was first reported by The American Conservative, which in recent weeks has published a series of allegations and reactions from the Lincoln Diocese.

The revelations began Aug. 1 with an open letter from a former priest regarding Msgr. Leonard Kalin — a former diocesan vocations director and pastor of the Newman Center at the University of Nebraska-Lincoln who is accused of grooming and sexual advances toward seminarians and college students.

The Lincoln Diocese has confirmed it received one report, in 1998, of a physical boundary violation against Kalin involving college students and seminarians.

In his letter, Peter Mitchell, a laicized priest who was a seminarian in Lincoln from 1994 to 1999, said Kalin had "a widespread reputation for heavy drinking, chain-smoking, frequent gambling, and basically modeling addictive behaviors." That included taking seminarians to a nearby Iowa casino, and on trips to Las Vegas and to a beach house on the Jersey shore. Mitchell said he did not attend any of the trips.

Mitchell also said Kalin would have the seminarian who accompanied him on his daily walk help him shower in a locker room in Memorial Stadium on the University of Nebraska campus. Mitchell said he avoided having to assist Kalin in the shower.

In a letter addressed to Conley, also published by The American Conservative, Wan Wei Hsien, a former University of Nebraska student and seminarian for a brief period, offered further support of Mitchell's story.

Hsien said Kalin made "unwanted sexual advances" toward him and a fellow seminarian that involved "verbal sexual compliments, asking to be touched in inappropriate places, and molestation," including French kisses. He added Kalin's actions amounted to "a rather standard pattern of grooming," and eventually Bishop Fabian Bruskewitz, head of the diocese at the time, ordered at least two seminarians to accompany Kalin on his walks.

In comments and emailed reactions to The American Conservative posts, several priests and past seminarians pushed back on some of Mitchell's allegations — accusing him of making inferences to what happened on trips he didn't join and defending against portrayals of the Newman Center under Kalin as "centered around a culture of partying and alcohol."

In his Aug. 10 letter, Conley said that the promised "transparency and objectivity" in the diocese moving forward will include an outside review of its safe environment policies and procedures that will look specifically at the Townsend case and evaluate both the bishop and diocesan staff regarding their responses to sexual abuse allegations and improper priest behavior.

"I want to repeat to you that I am sorry for the manner in which I have responded to allegations of improper behavior brought against Lincoln priests. I hope you forgive me," Conley wrote.