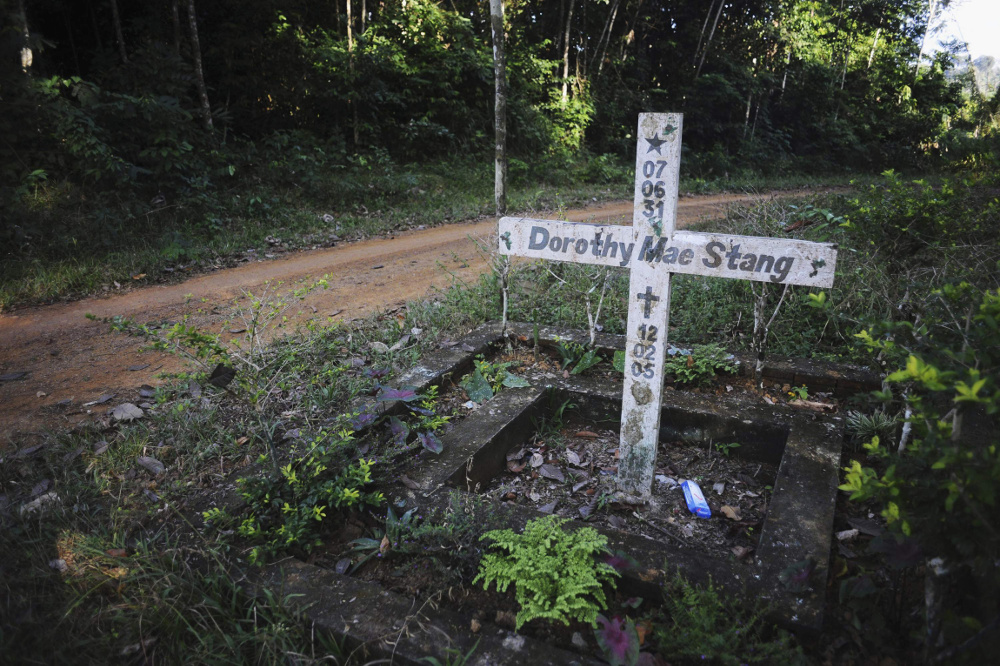 A wooden cross is seen in 2012 on the spot where U.S. Sister Dorothy Stang, a member of the Sisters of Notre Dame de Namur, was murdered in 2005 on an isolated road near the Brazilian town of Anapu for her defense of small farmers' land rights. Fr. José Amaro Lopes de Souza, Stang's close friend and associate, was taken into custody by authorities March 27. (CNS/Lunae Parracho, Reuters)

A priest connected with the Brazilian bishops' Pastoral Land Commission was arrested and charged with extortion and money laundering.

Fr. José Amaro Lopes de Souza was taken into custody by authorities March 27. He serves Santa Luzia of Anapu parish, in the northern Brazilian state of Para, and was a close friend and associate of the late U.S. missionary Sr. Dorothy Stang, a member of the Sisters of Notre Dame de Namur who was killed by ranchers in February 2005.

Judge Andre Monteiro Gomes, head magistrate of the Anapu region, said there is evidence the priest had incited violence among landless peasants, urging them to occupy land in the region.

He added that it appeared money had been transferred by farmers to relatives of religious men and women serving in the region in exchange for not having their land occupied.

"One can observe the persuasive force of the representative (priest) in influencing a whole group, inducing them to commit serious crimes, such as homicides, and there are indications as well of the supply of weapons," read the charges filed by a court representative.

In a letter, Bishop Joao Muniz Alves of Xingu and retired Bishop Erwin Krautler expressed support for the priest, whom they called an "unrelenting" defender of human rights, of land regularization, agrarian reform and landless settlements. They said the priest's arrest is a way to "delegitimize his commitment on behalf of the underprivileged."

The Xingu region in the Amazon has been plagued for years by violence and bloody confrontations among landless peasants and indigenous people seeking land rights and wealthy farmers and ranchers.

"We repudiate the accusations that he is promoting land invasions that are recognized by the courts as public land for agrarian reform," said bishops wrote, noting that the lands remain in the hands of wealthy, powerful people.

The priest, known as Fr. Amaro, has worked in Santa Luzia parish since 1998. He is the coordinator of the region's Pastoral Land Commission and was an integral member of the sustainable development project Stang started for peasants and small farmers.

The Landless Workers Movement in the region said in a social media post that the wealthy and powerful landowners want to "kill him (the priest) little by little with this prison."

"Father Amaro was a friend and constant companion in the defense of small farmers and small property owners with Sister Dorothy," the post said. "Since she was murdered in 2005, he has taken over the fighting in Anapu and has always been pursued for it, even being threatened several times with death."

Local media reported that the priest was sent to the same prison as Regivaldo Pereira Galvao, a rancher convicted of Stang's murder.