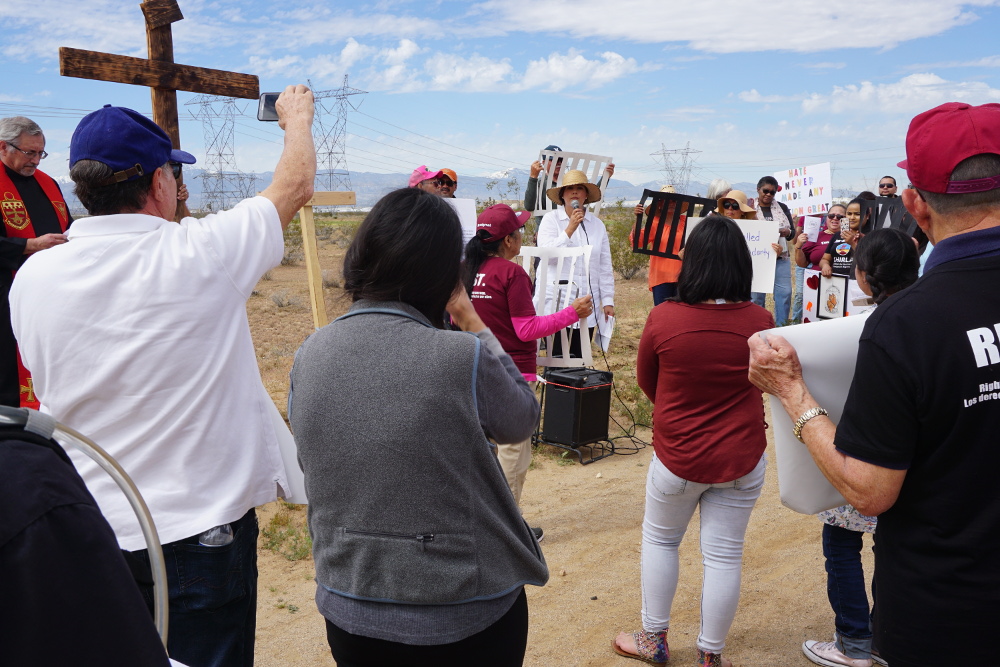 Hilda Cruz speaks to a group gathered for immigrant Stations of the Cross outside the Adelanto Detention Facility in California on Good Friday, April 19. (Marge Bitetti)

When Hilda Cruz, a faith organizer with the Interfaith Movement for Human Integrity, helped plan Good Friday Stations of the Cross in front of the Adelanto Detention Facility in San Bernardino County, California, this year, she was most familiar with the 14 stations typically used by Catholics.

Her interfaith partners, however, encouraged her to make an addition to the stations, which all "reflected upon the various ways that immigrants are suffering the persecution of an empire," just as Jesus suffered when he was crucified, Cruz said.

That 15th station "is where we know that Jesus resurrected and he's inviting us to do the work," Cruz said. "So the invitation to really experience the resurrection of Jesus is join the movement. Join. Do something."

Currently focusing on the often-overlapping issues of immigrant justice and mass incarceration, the Interfaith Movement for Human Integrity provides many options for California congregations of all faith traditions to "do something."

In the San Francisco Bay Area, where the atmosphere tends to be welcoming toward immigrants, the movement encourages congregations to provide "sanctuary."

While "sanctuary" is often a descriptor for jurisdictions that limit law enforcement's cooperation with immigration officials, or for places of worship that shield migrants from deportation by housing them on church grounds, the Interfaith Movement for Human Integrity defines it more broadly.

"Our definition of sanctuary is a corporal commitment of the congregation to be in solidarity with immigrants in their local community or nationwide … a commitment to walk alongside people who are in difficulty," said Miriam Noriega, the organization's program director.

When "people jump to the logistical complications of having a person live in their church," Noriega said, the interfaith movement can "challenge that go-to excuse" by describing sanctuary as "a ministerial, pastoral response" that can take many forms.

When she visits parishes, Noriega explains that they could form a "Nueva Esperanza [New Hope] Accompaniment Team" to help a newly arrived family access housing, resources and social support; visit or write to detained migrants; participate in vigils outside detention centers; join legislative advocacy visits; attend court cases for those in danger of detention or deportation; or report Immigration and Customs Enforcement activity to a special hotline.

In Inland Empire, a typically conservative area that comprises San Bernardino and Riverside Counties in California, anti-immigrant backlash has made "sanctuary" a bad word, Cruz said.

"We're still doing the work of sanctuary, receiving asylum seekers, but we cannot be as open and affirming as people in the Bay Area are," Cruz said. In Inland Empire, people with the Interfaith Movement for Human Integrity call their work a "faith collaborative" rather than a sanctuary movement, but they still visit detainees, hold vigils, accompany those who have been released and offer citizenship classes for more established immigrants.

It's most difficult to get congregations to support immigrants who have past criminal convictions, Noriega said, but her organization makes a point of emphasizing "faith values" like "mercy and restorative justice and redemption," over an attitude that criminalizes immigrants based on deeds for which they've already been punished.

"It's sad to hear when people are really passionate about enacting their faith values," but exclude "criminals," said Noriega. That's one way "we've challenged our congregations to evolve and have really used our faith values as our main lens to see immigration."

Faith can also help sustain members of the movement through work or personal struggles.

Lourdes Barraza, an immigrant support coordinator for the movement, first became involved when her husband was detained at the West County Detention Center in Richmond, California.

The group helped her hold press conferences and vigils for her husband, set up a GoFundMe page and connect with other networks. Barraza began to support other families in similar situations, and was eventually hired by the movement. Her husband was granted withholding of removal and released in April 2018, though the government has appealed his case.

"Sometimes [the work] can be overwhelming, especially when it brings back all those feelings that I personally have felt," Barraza said. "I definitely speak to God and ask him to continue giving me the strength that I need to continue working with others who are in the same position."

Throughout the state, congregations involved with the interfaith movement include Jews, Episcopalians, Methodists, Lutherans, Unitarian Universalists, Brethren, United Church of Christ, Catholics, the Riverside Community Center for Spiritual Living, and Buddhists. Muslim activists are involved in the Bay Area and there have been conversations with a mosque, a group of Quakers and individual Sikhs in Inland Empire.

According to Noriega, herself a Catholic, the main reason there aren't more Catholic parishes deeply involved with the movement is that Catholic Charities already has a robust program to involve parishes with caring for refugees. As low refugee admissions have reduced those opportunities, Noriega has gotten more calls from Catholic parishes who are now interested in partnering with her organization.

The movement also helps fill in some of the gaps that Catholic Charities doesn't cover by working with asylum seekers who are still fighting in court for the right to stay in the U.S.; unlike refugees, they aren't eligible for help resettling through nonprofits like Catholic Charities, but still have to adjust to life in the U.S.

Even working with their accompaniment team — which is meant to help introduce them to resources, provide a supportive network and maybe even help them afford housing — is an adjustment on both sides.

Cultural differences the movement has had to address include different attitudes toward appointments and scheduling, physical displays of affection, and "linear" versus "survival-mode" strategies for meeting needs, Cruz and Noriega explained.

"The more I get to know the complexity and the challenges of migrating here, in this moment, that this family and others are facing, it's helped me sharpen just where I want to put my time and energy and where I feel called."

Accompaniment teams also have to overcome a "romanticized notion of supporting an immigrant" and realize they may face challenges due to migrants' post-traumatic stress manifesting as depression, indifference or anxiety, even if they lack the framework to describe their mental health issues, said Noriega.

Yet the interfaith movement also tries to promote the view that immigrants aren't just victims in need of saving but "are already very savvy, very intuitive, very creative on how to move forward," she said. Looking at someone from a faith perspective, "from honoring their dignity, we also give them space to be themselves and we acknowledge who they are first."

For Gala King, a member of Buena Vista United Methodist Church in Alameda, the experience of accompanying a Guatemalan family and housing them on church property for around three years was transformative on both a personal and church level.

Buena Vista joined the interfaith network in 2015. In 2017, it declared itself a sanctuary congregation, a move that helped publicly state support for immigrants and foster reflection about how to manifest that support, said King, who was recently hired as a full-time Northern California faith community organizer for the Interfaith Movement for Human Integrity.

Housing a family has allowed many people to get involved in various ways, she added. The church helps facilitate legal aid, education and the family's search for more permanent housing, and members plan to attend their asylum hearing in a show of support.

"Meeting the family and the accompaniment program from a congregational level was a deeply life-enriching, changing experience," King said. "The more I get to know the complexity and the challenges of migrating here, in this moment, that this family and others are facing, it's helped me sharpen just where I want to put my time and energy and where I feel called."

A version of this story appeared in the June 14-27, 2019 print issue under the headline: California interfaith movement bolsters support for migrants.