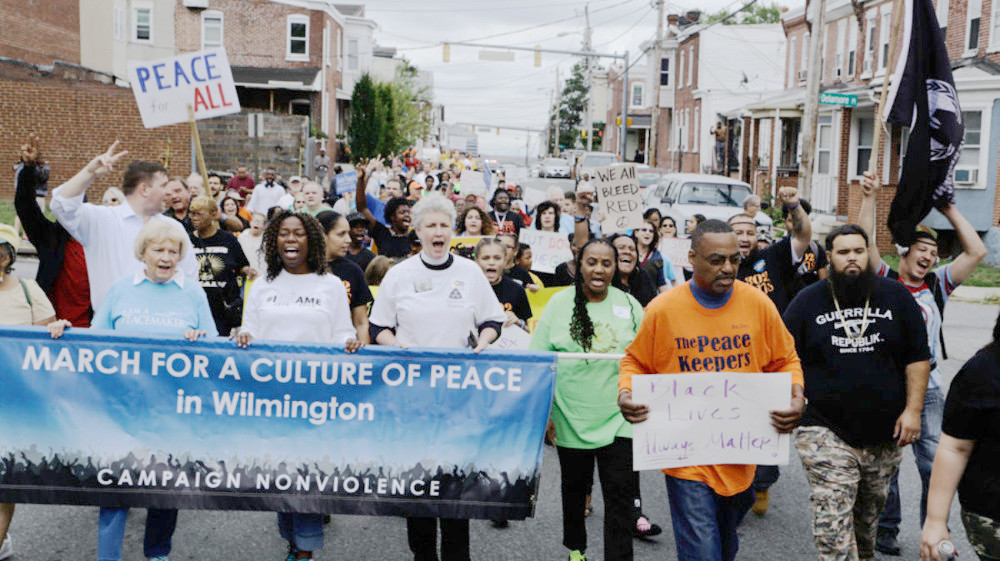 A March for Peace in Wilmington, Delaware on Sept. 23. Organizers in Delaware held over 60 events during Campaign Nonviolence's Week of Actions. (Courtesy of Pace e Bene)

A grassroots movement to bring nonviolence into the mainstream has been quietly but exponentially growing, resulting in 1,600 nonviolent actions in all 50 U.S. states and 16 other countries during the week of Sept. 16-24.

For the fourth year in a row, Pace e Bene, an organization founded by Franciscan Friars in 1989 and dedicated to promoting peace, justice and well-being for all, sponsored the Week of Actions as part of Campaign Nonviolence, a long-term movement to build a culture of peace.

"We have started this with the hope to get people to 'connect the dots' on issues of violence," said Fr. John Dear, nonviolence outreach coordinator for Pace e Bene, "but also to promote the vision of a new culture of nonviolence, to try to get the movement moving."

Campaign Nonviolence asked local event organizers to take a holistic approach, drawing attention to the interconnection of four main issues — poverty, racism, war and environmental destruction — as forms of violence and promoting a positive vision of a culture of nonviolence.

In Cincinnati, the Intercommunity Justice and Peace Center worked with Dear to launch "Nonviolent Cincinnati" as part of the Nonviolent Cities Project.

Charity Sr. Andrea Koverman, a program manager at the center who helped initiate and organize the launch, said the first goal of the project is to promote awareness that violence is "a really pervasive and critical problem," then show people there are alternatives to solving problems with violence or failing to respond.

"We're trying to make it very inclusive and cross-sectional, so we want people at the grassroots all the way up to elected officials," Koverman said.

Other notable actions included Peace Week Delaware, which put on over 60 events; an interfaith prayer service outside the civil rights museum in Memphis and events in Huntington, Indiana, where Our Lady of Victory Missionary Sisters held a peace march and the mayor proclaimed a day of peace.

Campaign Nonviolence organizers see this year's actions as only the early stage of a decades-long movement.

"We have been so immersed in the vision and belief system of violence, we've been formed and trained in it, and it's obviously something where that unlearning is going to take a long time," said Ken Butigan, a professor at DePaul University and a strategist and consultant for Campaign Nonviolence.

Even bringing the word "nonviolence" into popular discourse would be a sign of progress.

"We would love to see the question: 'What is the nonviolent option?' on the lips of the media, members of Congress and the larger movement for change," Butigan said.

As the campaign prepares for its fifth Week of Actions, which will take place a few weeks before the November 2018 congressional elections, Butigan said they plan to sharpen the focus, encouraging "people all over the country to find creative ways to pose that question."

This year, organizers were most focused on getting large numbers of people involved in events and giving new activists the opportunity to gain experience.

"These are not long-time activists, generally speaking," said Dear. "These are people who have stepped up to the plate. They have been so energized by the response locally that they have kept at it."

Campaign Nonviolence organizers also hoped the week would give local groups a chance to get acquainted and find ways to collaborate and form coalitions throughout the year. 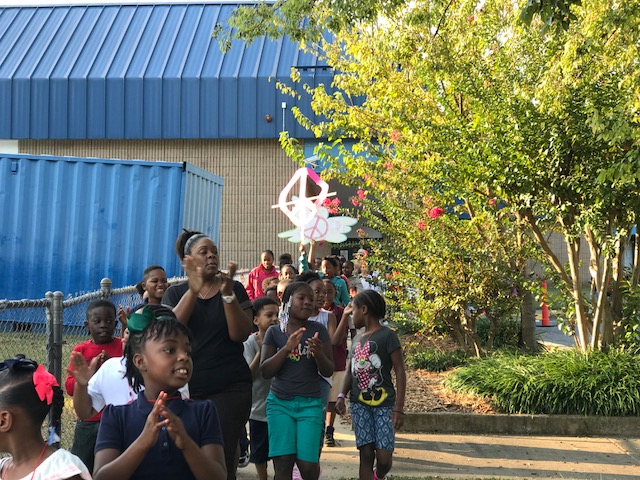 Students at Rockefeller Elementary School in Little Rock, Arkansas participate in a peace walk, one of a series of events at the school sponsored by the local Pax Christi chapter during Arkansas Peace Week. (Courtesy of Pax Christi Little Rock)

This was definitely true in Little Rock, where Cheryl Simon, president of the city's new Pax Christi chapter, said she met more people from other organizations at the peace fest than she would otherwise have met in a year.

"I really believe meeting those people in only the first step," Simon said. "I really hope that we'll keep working together throughout the year. Now that we know one another I want those relationships to deepen. … The more people that can do the work, the broader our scope can be."

Activists need to mobilize and train about 3.5 percent of the population, 11 million people in the case of the U.S., in order to effect change, he said, citing research by international relations experts Erika Chenoweth and Maria Stephan in their book Why Civil Resistance Works.

"In the next few years, say in the next five years, we envision helping to build a movement of millions of people who want an alternative to violence that's neither violent nor passive," said Butigan.

This could help people respond to specific manifestations of violence, he said, "but also help a growing number of people see that there is an alternative and that we can actually build a society and institutions that put the message and vision of nonviolence into practice."