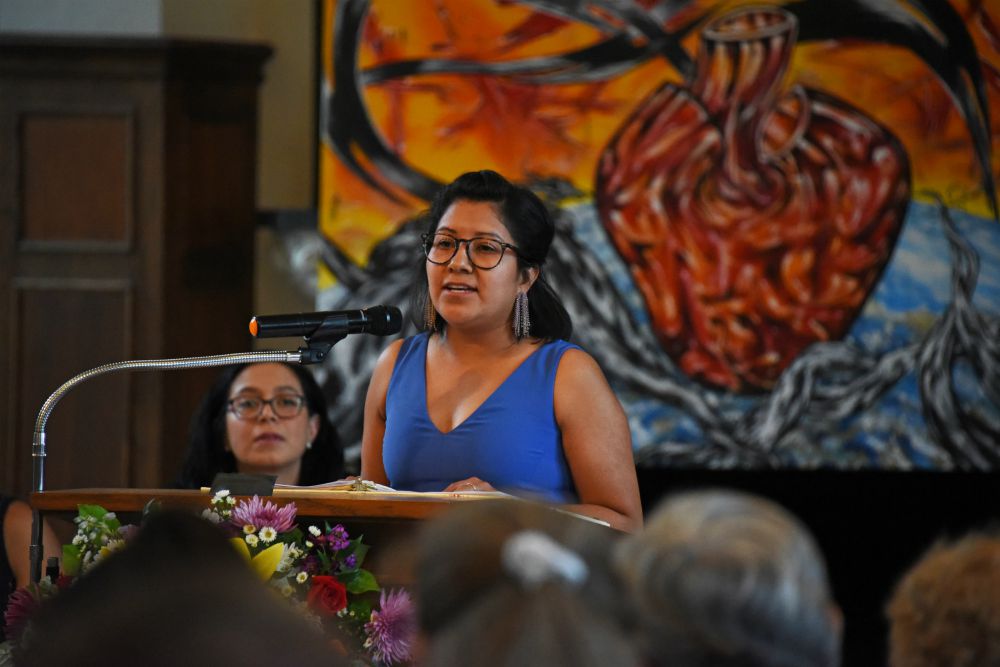 Many campus ministers have the same simple advice for programs that are exploring how to better serve the expanding population of college-age Latino Catholics: Listen.

When confronted with campus ministers who focus on finding or creating Spanish-language resources, "I keep repeating that it is not a matter of translating materials, but it is about listening and accompanying people where they are and embracing the value that people already bring to their campus ministry," said Claretian Fr. Javier Reyes.

But listening to Latino students and empowering them to express their faith and culture are strategies that campus ministers advocated at schools with Latino populations of any size.

Dominican University in River Forest, Illinois, a suburb of Chicago, is a majority-Latino school officially designated as a Hispanic Serving Institution by the federal government. Dominican experienced a 900 percent growth in its Latino student population between 1996 and 2016, said John DeCostanza, the school's director of university ministry.

Knowing that "staggering" growth was part of a larger demographic shift in the Catholic Church, where approximately 60 percent of members under 18 are Latino according to a Boston College report, staff realized they "needed better ways of serving Latinos in campus ministry and in their faith development, ways that were culturally grounded, culturally sensitive and attuned to their particular strengths and assets," DeCostanza said.

They've realized that "proximity with the Latino community," including faith-based nonprofits and parishes with ties to the broader Latino community in Chicago, is essential.

Dominican also hosted a conference called "El Futuro Is Here: Doing Campus Ministry and Theological Education Latinamente" July 31 to Aug. 2. Rather than offering a program for those involved in campus ministry to follow, the conference emphasized a way of doing ministry by "building on the strong foundation of the communities themselves," DeCostanza said. 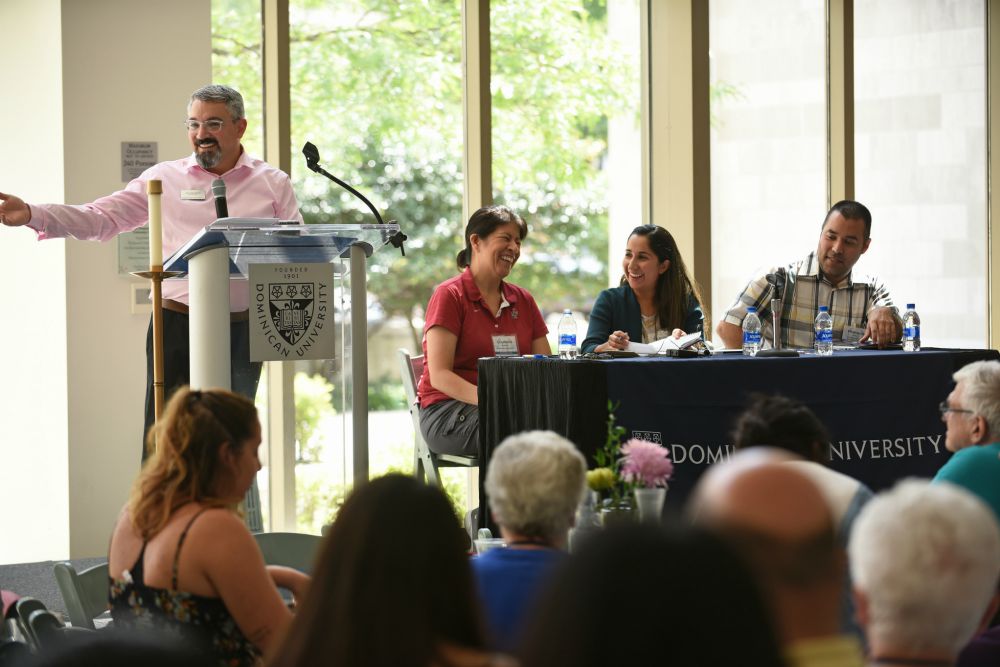 "That foundation is in popular religiosity, it's in accompaniment, it's in deep and warm and multifaceted relationships, it's in families and good food and really strong understanding that aspects of culture, be they carried by the Spanish language or not … are integral parts of Catholic experience for Latinos and those things need to be celebrated, honored and supported."

Claudia Herrera-Montero, director of campus ministry at St. Thomas University, recently finished a research project with Latina Catholic students where she learned that less than half attend church services or participate in a ministry, but 100 percent practice some form of devotion to Jesus, Mary or the saints.

"We try to highlight the beauty of the context where we come from in which popular religiosity or the spiritual practices of the people, the practices and the devotions of the people, are key in our spirituality, in our everyday life," she said.

At her university, a Hispanic Serving Institution located in Miami Gardens, Florida, campus ministry has also tried to build on the community's foundation by directly involving students' families. In a program called "abuelita theology" (grandma theology), campus ministers set up a lounge as a sala, or living room, and invited students' grandmothers to share their stories of immigration and faith. Campus ministry is now working to create a parents' panel.

Involving family is just one of the ways that campus ministry strives to honor the particularity of each student's experience and encourage them to share their personal story, said Herrera-Montero. Campus ministry has created a core group of students who lead "a participatory peer ministry program in which the students are empowered by theological reflection beginning with who they are and where they come from."

The school also tries to respond to needs that might arise for a particular group, such as when Herrera-Montero led a class to help Puerto Rican students process their experiences in the wake of Hurricane Maria.

St. Mary's University in San Antonio is also striving to recognize and respond to the diversity within the Latino community.

"Sometimes, being so close to the border, we get lost in the whole thing of the Mexican students, but we also have a big Central and South American population that's Hispanic, and what we want to do is involve more of those students," said Servando Ortiz, a junior computer engineering major who serves as a ministerial assistant. "We do involve them, but I think we could do more."

One way they are already improving is by celebrating more feast days that are unique to certain Central American countries, Ortiz said.

While his university is a Hispanic Serving Institution, Ortiz offered some advice for schools with smaller populations of Hispanic students that are just beginning to consider how to serve them better.

"I would say get together a group of students that are Hispanic, just talk to them and ask what do you feel is needed? How can we help you? And then involve them in the ministry because they're a part of the community and they bring their own faith, their own culture into the ministry, which can enrich it so much," he said.

"The importance of listening," was also the main thing Herrera-Montero said she would share with a program striving to improve ministry to Latinos. "Listening to who they are and where they are coming from. Listening to their needs before jumping into pedagogies, programs that do not necessarily apply or serve to the social location where they come from."

But even framing those conversations in terms of needs at all can do a disservice to Latino students, De Costanza suggested, explaining that Dominican University "really tried to frame the entire [El Futuro Is Here] conference in terms of strengths and assets that the community builds."

Before starting his current job in Springfield, Reyes had helped develop a leadership and lay formation program at Dominican University called Ministry en lo Cotidiano (Ministry in the Everyday) that places students to serve in Latino parishes or faith-based nonprofits for nine hours a week and offers them one hour per week of guided theological reflection grounded in themes from U.S. Latino theology.

"My hope is that more schools will start adopting programs like that, that are designed for Latinos and sometimes by Latinos that understand the Latino community and that speak the language of the Latino students," Reyes said. 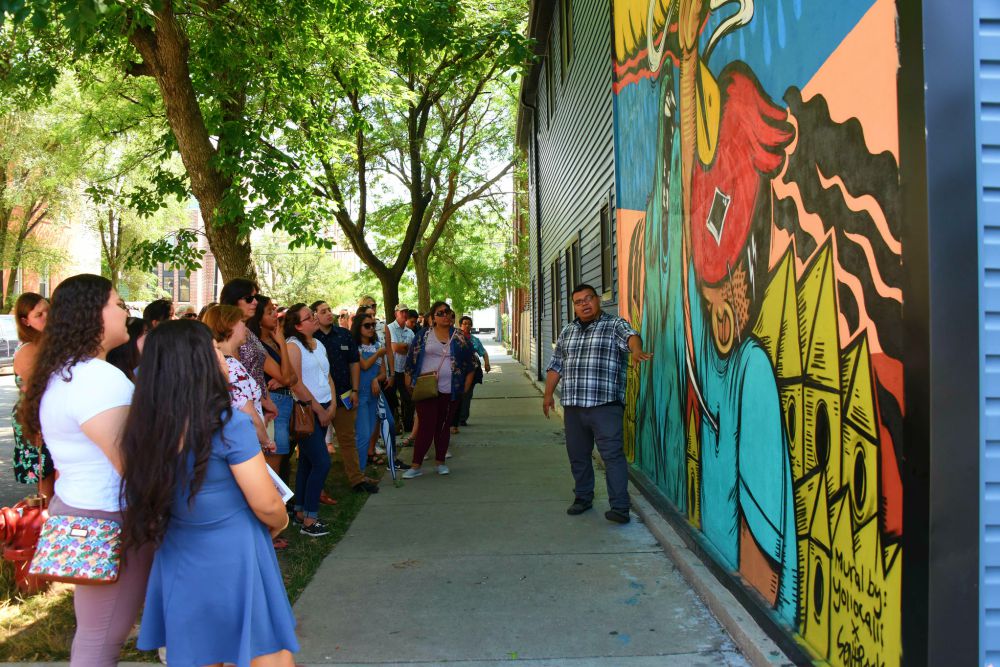 A version of this story appeared in the Nov. 16-29, 2018 print issue under the headline: Campus ministers: Listen to college-age Latinos.