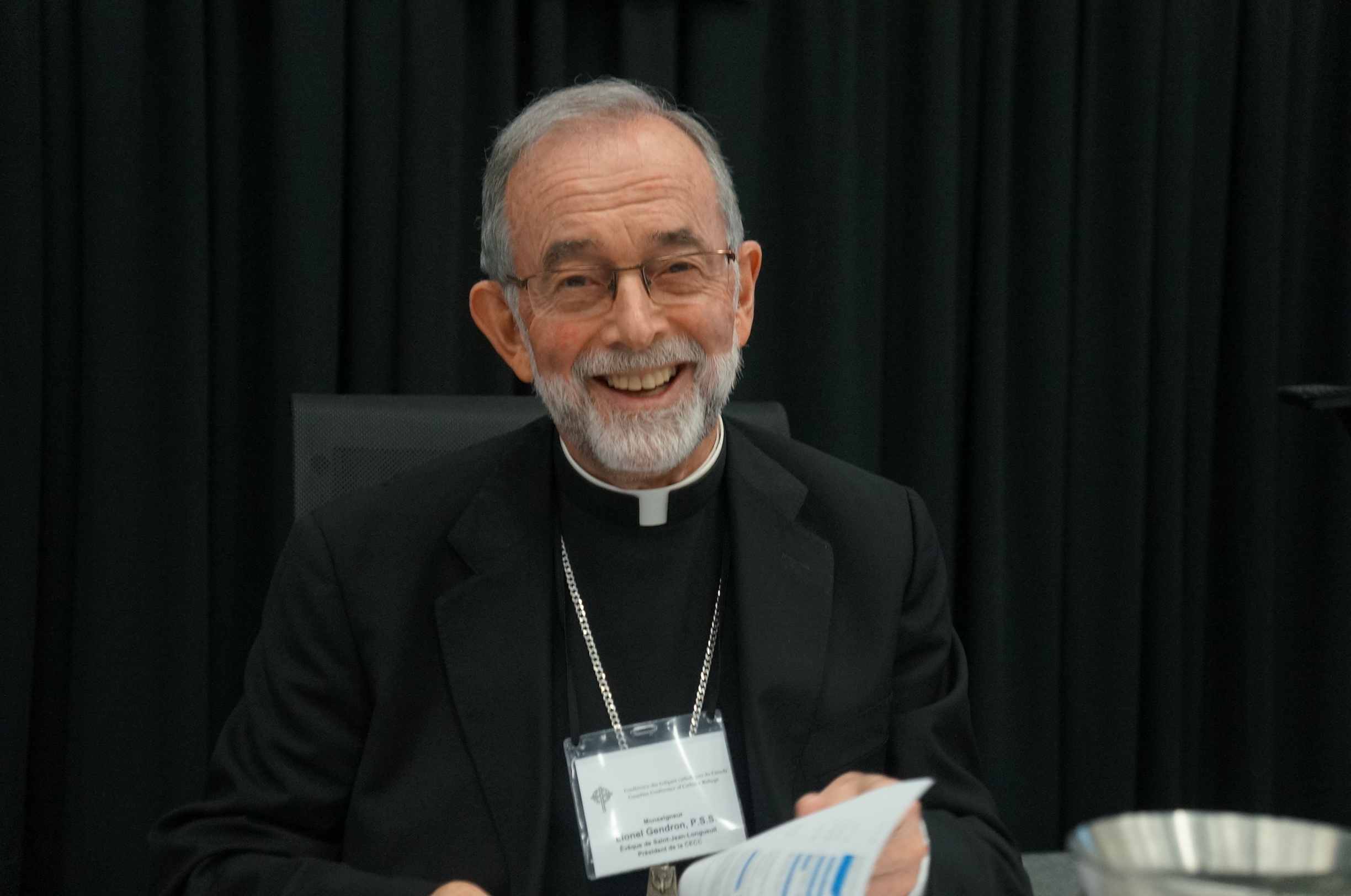 "What we want is for the Catholic Church to be the safest place for young people," said Bishop Lionel Gendron, president of the Canadian Conference of Catholic Bishops, speaking Sept. 28 after the close of the bishops' annual plenary in Cornwall, Ontario. (CNS/Canadian Catholic News/Deborah Gyapong)

New sexual abuse policies that Canada's bishops have vowed to implement will focus on prevention but will not include a mechanism to censure a bishop who commits or covers up an offense.

More than 80 bishops and eparchs from across Canada pledged unanimously to implement the sexual abuse document that has been six years in the making and is now set to be released. Previous documents established guidelines but required no commitment from bishops to implement them. Now bishops across the country have pledged to enforce these new national standards.

"What we want is for the Catholic Church to be the safest place for young people," said Bishop Lionel Gendron, president of the Canadian Conference of Catholic Bishops, speaking Sept. 28 after the close of the bishops' annual plenary in Cornwall, Ontario.

Titled "Protecting Minors from Sexual Abuse: A Call to the Catholic Faithful in Canada for Healing, Reconciliation, and Transformation," the document has been under construction since 2011. It builds on the 1992 document "From Pain to Hope," which was updated in 2007, Gendron said.

Work on the document was essentially finished before the church was rocked by recent sex-abuse scandals and cover-ups in the United States and other countries. In June, retired Washington Archbishop Theodore McCarrick resigned as a cardinal amid allegations of sexual misconduct. In August, a Pennsylvania grand jury report exposed decades of alleged abuse involving more than 300 priests and other church workers.

Those scandals led U.S. bishops to propose protocols, including the establishment of a third-party hotline to report abuse, to hold bishops more accountable. Similar protocols are absent from the Canadian document but could be added in the future.

The document is "for today," said Gendron. However, it is "already tomorrow, with all that's happened with Pennsylvania and Cardinal McCarrick. We need people to accompany us and lead us to help us in the best [way] we can to respond to these problems."

The new guidelines focus on prevention, on "what shall we do so it will not happen again," Gendron said. Its protocols are not only for "priests, bishops and deacons, but also for lay personnel and lay volunteers."

The bishops established a permanent committee of bishops and specialists to "help the bishops to keep walking and responding in the best way possible to all these questions," said Gendron. But the CCCB has no mechanism for dealing with a bishop accused of abusive or coercive behavior or covering up for abuse.

"If there is a complaint about a bishop, we call the nuncio," the pope's representative in Canada, Gendron said. "Today that is what we would do."

He pointed out that the CCCB has no authority over its member bishops; that authority rests with Pope Francis.

"Even the president of the conference cannot discipline another bishop," Gendron said.

"This is a theological discussion. The problem is not only here in Canada, it's a global problem," said Gendron.

"I think that Rome will probably -- I'm not sure how long it's going to take -- give some orientations in the near future," he said.

During the plenary, the bishops heard the testimony of a victim of clerical sexual abuse. Deborah Kloos of the Diocese of London, Ontario, told the bishops the abuse crisis has "not been handled properly and, as a result, many people suffered irreparable damage lasting them a lifetime."

Kloos, who was abused as a teenager in the early 1980s by a parish priest, sent a copy of her speech to The Catholic Register.

"What you are doing now in addressing the crisis of clergy abuse takes courage," she told the bishops. "I commend Cardinal [Sean] O'Malley of Boston for publicly apologizing for the way his office handled a 2015 letter containing allegations against Cardinal Theodore McCarrick."

She described the sexual abuse crisis as an infected wound that cannot heal "unless it is opened up and can heal from the inside out."

Kloos said she felt great distress upon returning to Mass after a 20-year absence to discover that prayers for abuse survivors were never said during the liturgy. She also asked that clerical sexual abuse victims be remembered in the prayers of the faithful at every Mass.