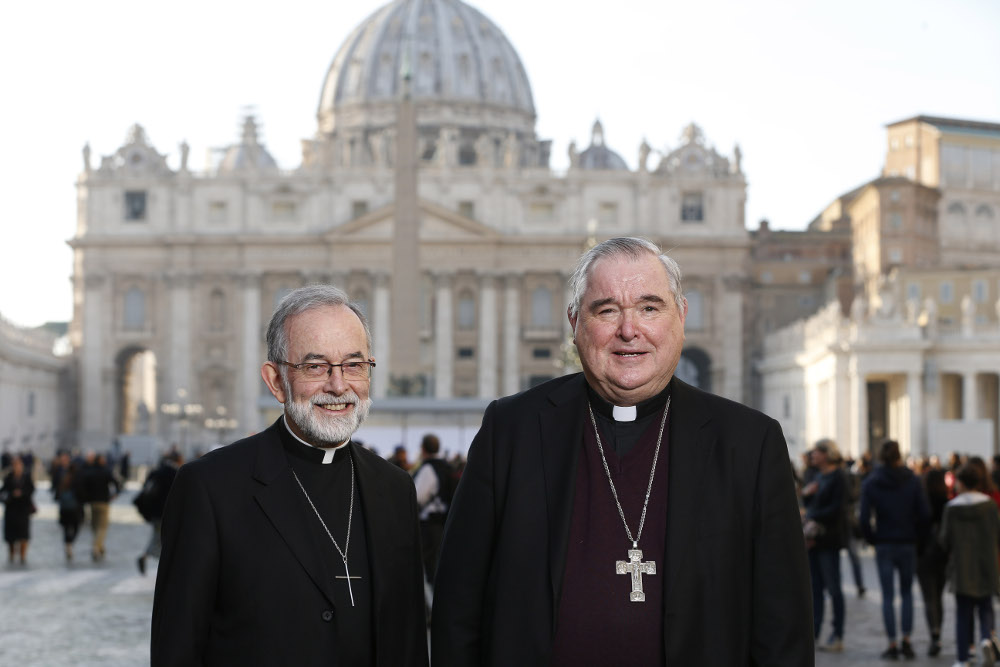 The leaders of the Canadian Conference of Catholic Bishops said the concerns of the indigenous peoples in Canada and the bishops' updated sexual abuse policies were among the issues they spoke about with Pope Francis.

Each of those issues is an ongoing concern that is "dear to his heart," Bishop Lionel Gendron of Saint-Jean-Longueuil, Quebec, conference president, told Catholic News Service Dec. 7.

Gendron met the pope at the Vatican Dec. 6 along with Archbishop Richard Gagnon of Winnipeg, Manitoba, vice president of the CCCB, and Msgr. Frank Leo Jr., general secretary of the conference. They were in Rome Dec. 3-14 as a part of an annual trip by conference leadership to meet the pope and other senior Vatican officials.

At the end of their annual plenary in September, the bishops vowed to implement a new set of guidelines dealing with abuse protection, prevention, care and reconciliation. The two conference leaders told CNS that the guidelines received praise from Jesuit Fr. Hans Zollner, one of the leading experts in the church regarding safeguarding and a member of the Pontifical Commission for the Protection of Minors.

Gagnon said that during their meeting with Zollner Dec. 7, the Jesuit said "he very much likes the resource we produced" and it was "very well-received." The archbishop added that each diocese will be focused on victims and all those affected by abuse, including the families of the abused, of the perpetrator and people in the community.

Gendron said he will return to the Vatican in February to attend a summit called by Pope Francis to address the protection of minors and vulnerable people.

He said during their meeting with the pope, "One of the things that the pope mentioned about (abuse) was that it is not only a problem of clergy, it is society."

But, the bishop added, the church is meant to be witnesses to the Gospel to the rest of the world, and the abuse of minors and vulnerable adults "is not the Gospel."

The bishops told the pope they had a survivor speak at their plenary meeting and discussed their work with him.

Gagnon said the pope was "very thankful for what is being done, and he has a very intense, very strong focus on this issue," which he recognizes is very much a global issue.

"Living the joy of the Gospel as he does, he sees this as very important today not just for the church, but for society," the archbishop said.

"We want the church to be the safest place in the world, and it's a way of evangelizing our world through our own conversion," Gendron said.

Another main concern the two leaders continued to share with the pope, the bishop said, was the "question of the indigenous people" of Canada, including what the bishops have been trying to do and "are allowed to do in our society."

The bishops have been conducting "sharing sessions" in which three bishops sit together with a dozen indigenous people, "and it has helped a lot," Gendron said.

"One of the things they want is the same thing that most people in our dioceses would like — to have their bishop sit with them, listen to them and share with them, an 'encounter,' as Pope Francis would say," the bishop said.

Gagnon said they shared with the pope the various efforts the bishops across Canada have made on the local level "to build bridges."

"He has made himself very accessible to the native peoples on the different continents" he has visited, he said.

During a visit to Bolivia in 2015, Pope Francis issued an apology to all the indigenous peoples of the Americas for abuses suffered.

In 2015, Canada's Truth and Reconciliation Commission called upon the pope to visit Canada and make a formal apology to indigenous survivors, their families and communities for the abuse suffered in Catholic-run residential schools.

During a meeting at the Vatican in 2017, Canadian Prime Minister Justin Trudeau asked Pope Francis to help Canadians "move forward on a real reconciliation" with the country's indigenous people "by issuing an apology" on behalf of the Catholic Church for its role in harming their communities.

As president of the bishops' conference, Gendron issued a letter in March this year to the indigenous peoples of Canada, saying Pope Francis takes seriously the findings of the commission, but "felt that he could not personally respond" or visit at the time.

"But he was not closing the doors," the bishop said.

"He told us that ... it is, first of all, our responsibility," to lead efforts at reconciliation and that "he doesn't want to centralize everything," Gendron said. He added that the pope does appreciate hearing what they are doing and encourages them in their efforts.

"It seems that the pope often waits for an opportune time to visit a particular country," Gagnon said. "An opportune time to come to Canada is probably on his mind also, when the field is ripe and efforts at reconciliation are developing further."