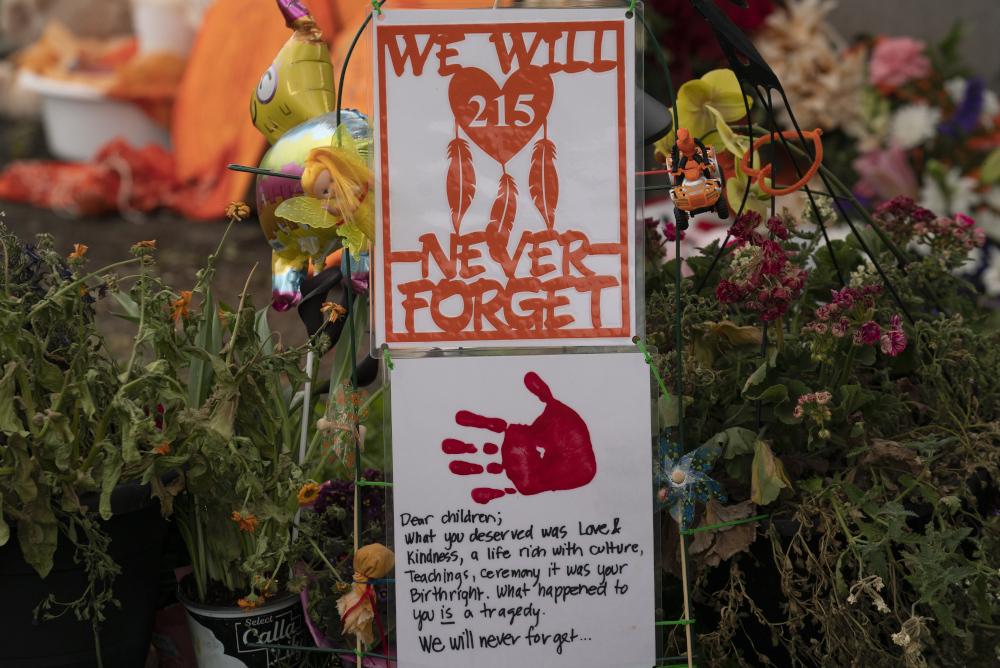 A memorial is seen outside the Residential School on June 13 in Kamloops, British Columbia. (AP/The Canadian Press/Jonathan Hayward)

A Canadian Indigenous group said June 30 a search using ground-penetrating radar has found 182 human remains in unmarked graves at a site near a former Catholic Church-run residential school that housed Indigenous children taken from their families.

The latest discovery of graves near Cranbrook, British Columbia, follows reports of similar findings at two other such church-run schools, one of more than 600 unmarked graves and another of 215 bodies. Cranbrook is 524 miles (843 kilometers) east of Vancouver.

The Lower Kootenay Band said in a news release that it began using the technology last year to search the site close to the former St. Eugene's Mission School, which was operated by the Catholic Church from 1912 until the early 1970s. It said the search found the remains in unmarked graves, some about 3 feet (a meter) deep.

It's believed the remains are those of people from the bands of the Ktunaxa nation, which includes the Lower Kootenay Band, and other neighboring First Nation communities.

Chief Jason Louie of the Lower Kootenay Band called the discovery "deeply personal" since he had relatives attend the school.

"Let's call this for what it is," Louie told CBC radio in an interview. "It's a mass murder of Indigenous people."

From the 19th century until the 1970s, more than 150,000 Indigenous children were forced to attend state-funded Christian boarding schools in an effort to assimilate them into Canadian society. Thousands of children died there of disease and other causes, with many never returned to their families.

Nearly three-quarters of the 130 residential schools were run by Roman Catholic missionary congregations, with others operated by the Presbyterian, Anglican and the United Church of Canada, which today is the largest Protestant denomination in the country.

The Canadian government has acknowledged that physical and sexual abuse was rampant in the schools, with students beaten for speaking their native languages.

Last month, the remains of 215 children, some as young as 3 years old, were found buried on the site of what was once Canada's largest Indigenous residential school near Kamloops, British Columbia.

Prior to news of the most recent finding, Canadian Prime Minister Justin Trudeau said he has asked that the national flag on the Peace Tower remain at half-mast for Canada Day on July 1 to honor the Indigenous children who died in residential schools.

On June 29, it was announced that a group of Indigenous leaders will visit the Vatican later this year to press for a papal apology for the Roman Catholic Church's role in residential schools.

The Canadian Conference of Catholic Bishops said Indigenous leaders will visit the Vatican from Dec. 17-20 to meet with Pope Francis and "foster meaningful encounters of dialogue and healing."

After the graves were found in Kamloops, the pope expressed his pain over the discovery and pressed religious and political authorities to shed light on "this sad affair." But he didn't offer the apology sought by First Nations and the Canadian government.

The leader of one of Canada's largest Indigenous groups says there are no guarantees an Indigenous delegation travelling to the Vatican will lead to Francis apologizing in Canada.

"There are no guarantees of any kind of apology" from the pope, said Bellegarde.

"This is really part of truth and part of the healing and reconciliation process for survivors to hear the apology from the highest position within the Roman Catholic Church, which is the pope."

"I'm really done with the government and churches saying they are sorry," he said. "Justice delayed is justice denied." 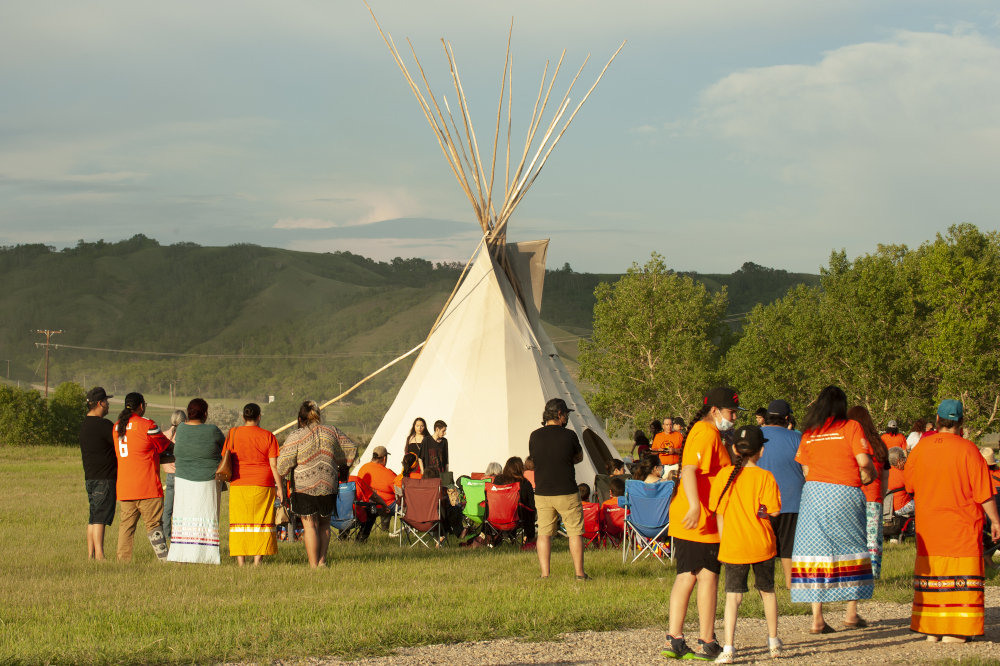 A vigil takes place June 26 where ground-penetrating radar recorded hits of what are believed to be 751 unmarked graves near the grounds of the former Marieval Indian Residential School on the Cowessess First Nation, Saskatchewan. (AP/The Canadian Press/Mark Taylor)

A papal apology was one of 94 recommendations from Canada's Truth and Reconciliation Commission, but the Canadian bishops conference said in 2018 that the pope could not personally apologize for the residential schools.

Since the discovery of unmarked graves at the sites of former residential schools, there have been several fires at churches across Canada. There has also been some vandalism targeting churches and statues in cities.

On June 30, Alberta's premier condemned what he called "arson attacks at Christian churches" after a historic parish was destroyed in a fire.

"Today in Morinville, l'église de Saint-Jean-Baptiste was destroyed in what appears to have been a criminal act of arson," Kenney said in a statement.

RCMP said officers were called to the suspicious blaze at the church in Morinville, about 40 kilometers (25 miles) north of Edmonton, in the early hours of June 30.

Trudeau and an Indigenous leader said arson and vandalism targeting churches is not the way to get justice following the discovery of the unmarked graves.

"The destruction of places of worship is unacceptable and it must stop," Trudeau said. "We must work together to right past wrongs."

Bellegarde said burning churches is not the way to proceed.

"I can understand the frustration, the anger, the hurt and the pain, there's no question," he said. "But to burn things down is not our way."