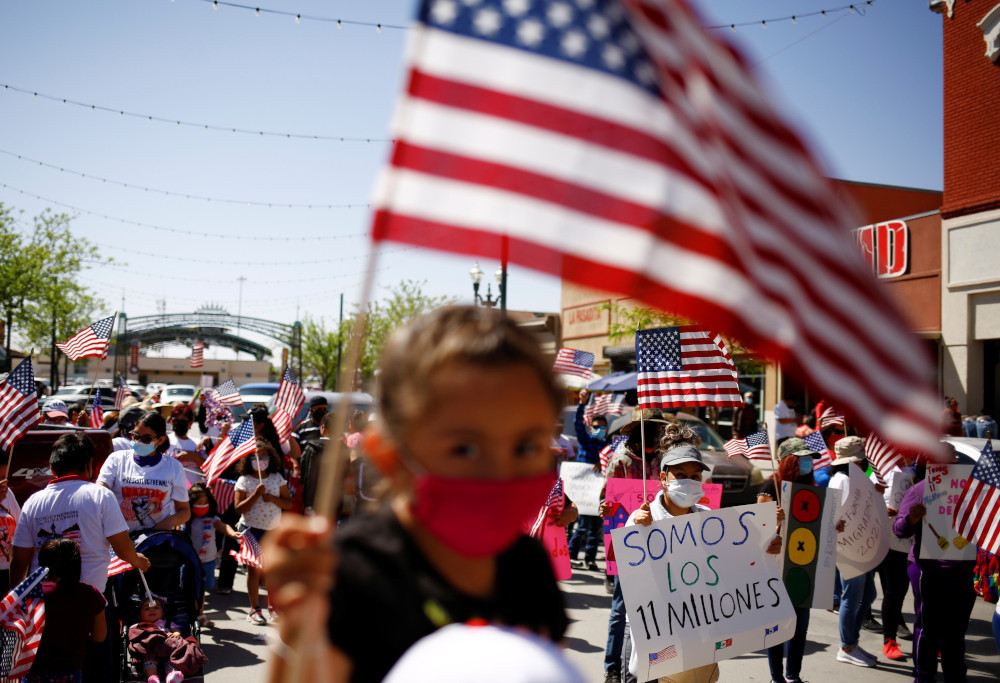 Members of the Border Network for Human Rights and the Reform Immigration Alliance for Texas hold a march in El Paso, Texas, April 10, 2021, to launch the new "We Are the 11 Million" campaign demanding immigration reform and a pathway to citizenship for all immigrants living in the U.S. without documents. (CNS/Reuters/Jose Luis Gonzalez)

A Vatican official asked a group of bishops gathered at Mundelein Seminary June 2 to think of migrants, whether they arrive for the short or long term, as "parishioners" and organize pastoral plans to tend to them.

Cardinal Michael Czerny, undersecretary of the Migrants and Refugees Section of the Vatican's Dicastery for Promoting Integral Human Development, addressed via Zoom an emergency meeting of bishops from the U.S., Central America and Mexico, which included heads of major U.S. Catholic organizations that help migrants.

"I hope that, after this meeting, you can call your priests together and consider the pastoral task incumbent on us all: to welcome, to protect, to promote and to integrate," Czerny said. "Depending on where the diocese is, the parishes might encounter one or more [points] of departure, transit, arrival, short- or long-term settlement, and even return of migrants.

"And in each case, the migrants are 'our' parishioners, whether briefly or long-term, whether practicing Catholics or of other faiths or no religion at all."

Czerny, in particular, praised the "effective ministry" of women religious and spoke of "the recent deployment of religious sisters from all across the United States to care for unaccompanied youth and children arriving at the border."

Likewise, dioceses and church organizations along what he called the Panama-to-Alaska "corridor" as well as a path from Newfoundland to Hawaii, which see a lot of migrant movement, can carry out similar work, he said.

"And if the corridor really stretches so far and includes so many suffering brothers and sisters, then our pastoral sharing and pastoral planning and pastoral collaboration also need to stretch just as far and just as deep," he said.

He asked that every diocese along the "corridor," and the church's agencies or organizations along the way, accompany those who are vulnerable or needy, to "carry out practical care" indifferent to the reasons people left their home countries.

The meeting brought together prelates from various dioceses in the U.S., as well as Mexico, Honduras, Guatemala and El Salvador, who were encouraged by Czerny to tend to those wanting to leave but also to tend to those who returned to their communities after being deported. 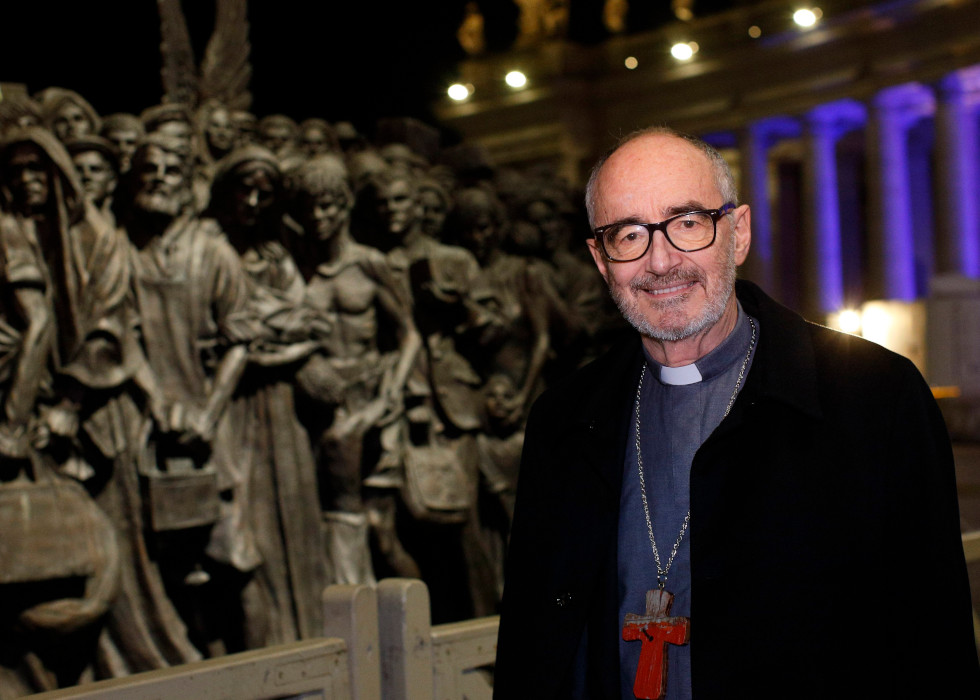 Cardinal Michael Czerny, undersecretary for migrants and refugees at the Vatican Dicastery for Promoting Integral Human Development, poses for a photo at the "Angels Unawares" statue in St. Peter's Square at the Vatican Dec. 15, 2020. (CNS/Paul Haring)

That way, he said, when a person is forced to flee, moving from one parish to another, from one diocese to another or crossing a national boundary, the person should experience "the uninterrupted or seamless care of Christ" carried out by his followers along the way.

"There are so many important opportunities to help them and to support one another, and all these small efforts compose a mosaic and finally a picture of how the diocese is actually responding pastorally to the vulnerable people we usually call 'migrants' or 'refugees, but also the internally displaced, the climate-displaced and the victims of human trafficking," he said.

Migration, he said, is part of the salvation history of Christians: Abraham, "a wandering Aramean," took his family from Ur "to a place of greater promise — a promised land," and Jesus, as an infant, "practically started life as a refugee."

"Dislocation and relocation are at our origins as people of God. They are baked into our DNA as Christians. They help to make us who we are," said Czerny, whose family was forced flee Czechoslovakia following World War II.

"True, humans treasure the place where they were born and feel at home, but they typically move — sometimes voluntarily, sometimes per force, as the traumas of World War II — Nazism, imprisonment, forced labor, concentration camp, communism — caused my family to flee from Czechoslovakia to Canada," he said. "Taking refuge or being displaced or migrating does not make them inferior in status, less human or less worthy of the highest regard."

He acknowledged that the reason for the meeting he was addressing was the "continuing and probably increasing arrival of many people seeking to cross the border from Mexico."

No matter how Christians encounter different forms of migration, he said, it is essential to respond to people on the move as brothers and sisters.

"Migration is not first a problem to be managed, or a phenomenon to be feared, but a sign of relationships to be established, reconciled, healed, and a possibility for mutual transformation, right relationship with the earth, and the construction of a world on the basis of social friendship and universal human fraternity," he said.

"Forced migration is a sign that the world — although more and more globalized, interconnected, unified — continues to draw artificial lines of exclusion," he added. "While borders need to be managed, they don’t have to be destructive but can be places of encounter and exchange and transition to the better."