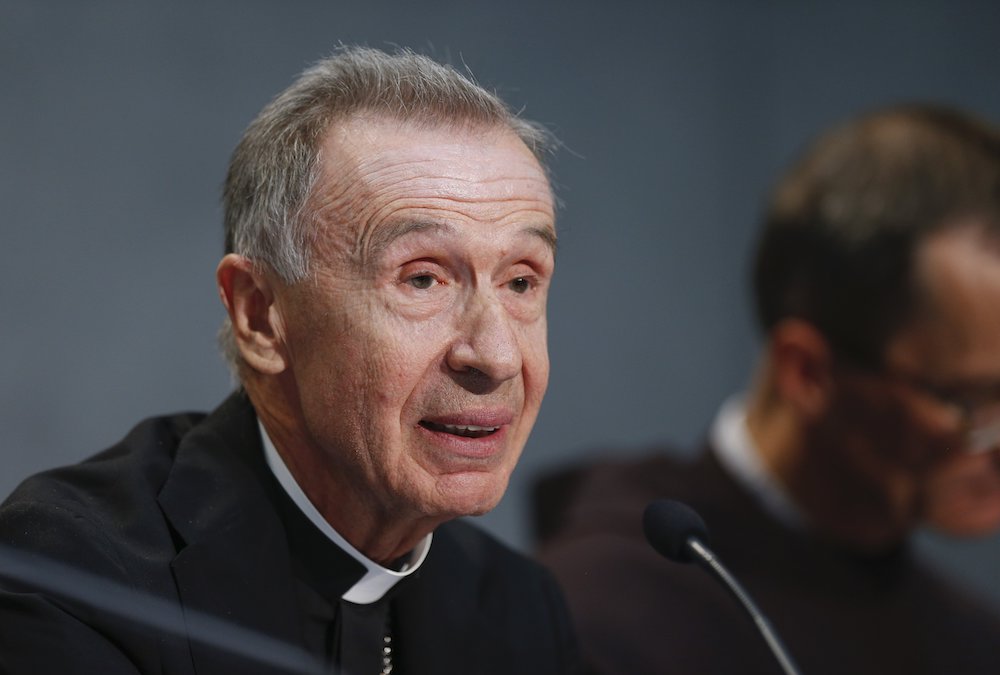 Then-Archbishop Luis Ladaria Ferrer speaks at a Vatican press conference in this Sept. 8, 2015, file photo. Ladaria is now a cardinal and prefect of the Congregation for the Doctrine of the Faith. (CNS/Paul Haring)

The Congregation for the Doctrine of the Faith has urged the U.S. bishops to proceed with caution in their discussions about formulating a national policy "to address the situation of Catholics in public office who support legislation allowing abortion, euthanasia or other moral evils."

Cardinal Luis Ladaria, congregation prefect, reiterated what he said he had told several groups of U.S. bishops during their 2019-2020 ad limina visits, namely that "the effective development of a policy in this area requires that dialogue occurs in two stages: first among the bishops themselves, and then between bishops and Catholic pro-choice politicians within their jurisdictions."

In the letter to Archbishop José Gomez of Los Angeles, president of the U.S. Conference of Catholic Bishops, Ladaria also insisted: such a policy cannot usurp the authority of an individual bishop in his diocese on the matter; the policy would require near unanimity; and it would be "misleading" to present abortion and euthanasia as "the only grave matters of Catholic moral and social teaching that demand the fullest level of accountability on the part of Catholics."

The letter, dated May 7 and obtained by Catholic News Service in Rome, said it was in response to a letter from Gomez informing the doctrinal congregation that the bishops were preparing to address the situation of Catholic politicians and "the worthiness to receive holy Communion."

Ladaria warned that without the unanimity of the bishops, a national policy, "given its possibly contentious nature," could "become a source of discord rather than unity within the episcopate and the larger church in the United States."

The cardinal also suggested the discussion "would best be framed within the broad context of worthiness for the reception of holy Communion on the part of all the faithful, rather than only one category of Catholics, reflecting their obligation to conform their lives to the entire Gospel of Jesus Christ as they prepare to receive the sacrament."

Given the importance of the issue, which goes beyond the boundaries of the United States, Ladaria also said, "Every effort should be made to dialogue with other episcopal conferences as this policy is formulated in order both to learn from one another and to preserve unity in the universal church."

The cardinal's letter also mentioned a reference by Gomez to a letter then-Cardinal Joseph Ratzinger sent in 2004 to then-Cardinal Theodore McCarrick of Washington about Catholic politicians and Communion. The letter, Ladaria said, was in "the form of a private communication" to the bishops and should be read only in the context of the formal 2002, "Doctrinal note on some questions regarding the participation of Catholics in political life."

When the U.S. bishops made their ad limina visits to the Vatican in 2004, Ladaria said, "it was clear that there was a lack of agreement regarding the issue of Communion among the bishops."

"At that time, the development of a national policy was not under consideration, and Cardinal Ratzinger offered general principles on the worthy reception of holy Communion in order to assist local ordinaries in the United States in their dealings with Catholic pro-choice politicians within their jurisdictions," he said.

"Cardinal Ratzinger's communication," he said, "should thus be discussed only within the context of the authoritative doctrinal note which provides the teaching of the magisterium on the theological foundation for any initiative regarding the question of worthy reception of holy Communion."

The 2002 note said, "Those who are directly involved in lawmaking bodies have a 'grave and clear obligation to oppose' any law that attacks human life. For them, as for every Catholic, it is impossible to promote such laws or to vote for them."

The 2002 note did not, however, mention reception of the Eucharist.

Ratzinger's 2004 letter, which was never published by the Vatican, said, "Regarding the grave sin of abortion or euthanasia, when a person's formal cooperation becomes manifest — understood in the case of a Catholic politician as his consistently campaigning and voting for permissive abortion and euthanasia laws — his pastor should meet with him, instructing him about the church's teaching, informing him that he is not to present himself for holy Communion until he brings to an end the objective situation of sin and warning him that he will otherwise be denied the Eucharist."

"When 'these precautionary measures have not had their effect or in which they were not possible,' and the person in question, with obstinate persistence, still presents himself to receive the holy Eucharist, 'the minister of holy Communion must refuse to distribute it,' " Ratzinger wrote, quoting from a declaration of the Pontifical Council for Legislative Texts on the issue of Communion for divorced and civilly remarried Catholics.

Writing to Gomez, Ladaria said the U.S. bishops need an "extensive and serene dialogue" among themselves and between individual bishops and Catholic politicians in their dioceses who do not support the fullness of the church's teaching to understand "the nature of their positions and their comprehension of Catholic teaching."

Only after both dialogues, the cardinal said, the bishops' conference "would face the difficult task of discerning the best way forward for the church in the United States to witness to the grave moral responsibility of Catholic public officials to protect human life at all stages."

"If it is then decided to formulate a national policy on worthiness for Communion, such a statement would need to express a true consensus of the bishops on the matter, while observing the prerequisite that any provisions of the conference in this area would respect the rights of individual ordinaries in their dioceses and the prerogatives of the Holy See," the cardinal said, citing St. John Paul II's 1998 document on bishops' conferences.

Ladaria specifically pointed to Paragraphs 22 of the document, Apostolos Suos, which says bishops' conferences may publish doctrinal declarations when they are "approved unanimously," but "a majority alone" is not enough for publication without the approval of the Vatican.

He also cited Paragraph 24, which says the bishops' conference cannot hinder an individual bishop's authority in his diocese "by substituting themselves inappropriately for him, where the canonical legislation does not provide for a limitation of his episcopal power in favor of the episcopal conference."