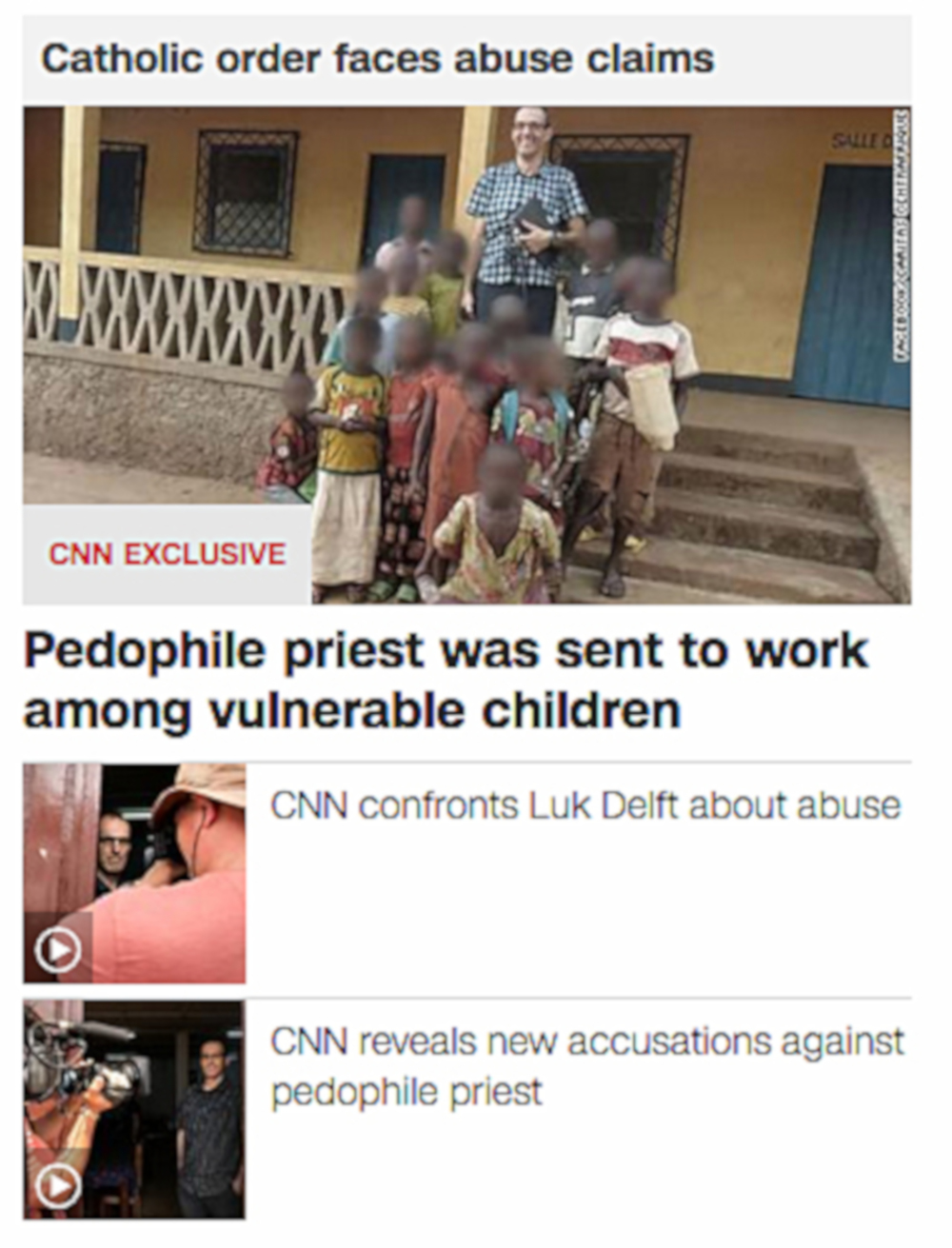 Salesian Fr. Luk Delft is seen in a screen shot from CNN.com. Caritas Internationalis, the Vatican-based confederation of 165 national Catholic charities, has expressed sadness and outrage over incidents of child abuse by the Belgian priest, who had been the national director of Caritas in the Central African Republic. (CNS/CNN.com)

Caritas Internationalis, the Vatican-based confederation of 165 national Catholic charities, has expressed sadness and outrage over incidents of child abuse by a Belgian Salesian priest who had been the national director of Caritas in the Central African Republic.

Caritas Internationalis in Rome released a written statement Nov. 21, the same day CNN published an investigative report outlining new accusations against Fr. Luk Delft, including his 2012 conviction in Belgium of two counts of child abuse and of possession of child pornography.

"Caritas Internationalis is assisting the local Caritas in the Central African Republic as it investigates the allegations, strengthens its safeguarding mechanisms and offers care and support to any possible victims and their families," the statement said.

"Caritas Internationalis has asked all national organizations worldwide to vet their governance, staff, volunteers and international staff," it added.

"Caritas encourages anyone with a safeguarding concern to report to the local police. A report can also be made to Caritas Internationalis on cho@caritas.va," it added.

The national office of Caritas Internationalis in Belgium issued a statement Nov. 19 saying it was "appalled by the serious accusations of child abuse against a staff member of the Caritas global network."

Even though the unnamed staff member was not working for Caritas Belgium, it said, "the entire confederation of Caritas Internationalis is affected."

It added that judicial authorities in Belgium were informed in June 2019.

The Caritas confederation also launched an investigation and a support system for victims. The Caritas Belgium statement added that an external audit had been launched to pinpoint what "negligence" had occurred to allow for the priest to be working for Caritas as well as to identify weaknesses in current prevention and protection policy.

CNN released a report revealing not only fresh allegations of child abuse by the priest while he was serving in Central African Republic, but it outlined how 50-year-old Delft had continued to work in areas with access to poor and vulnerable minors despite a court-ordered ban against contact with children until 2022.

CNN reported that the Salesian order was aware of allegations against the priest beginning with the priest's own 2001 confession of assaulting two boys at a Salesian boarding school in Ghent, Belgium.

He was transferred to another school and, in 2009, child pornography was found on his computer, according to CNN.

The priest was asked to leave that school after the Salesian provincial was informed, CNN said, and the priest then went on to become the director of Belgium's Salesian-run aid agency in 2010. According to CNN, he visited Haiti to help with humanitarian assistance there following the 2010 earthquake.

In 2012, a Belgian court convicted Delft of child abuse and possession of child pornography after a former co-worker alerted authorities; the priest was banned from having contact with children until 2022.

However, Delft then went to the Central African Republic and started working with Caritas at a camp for internally displaced people. CNN said two men told them that their sons had been abused by the priest at the camp.

The report included video footage of a CNN reporter confronting Delft June 16 with the new accusations; the priest denied any knowledge.

CNN said it then informed the priest's superior, Salesian Fr. Carlo Loots, about the new allegations, and the priest was recalled to Belgium.

The Salesians told CNN the police had been informed and that Delft was being kept "under supervision" in a location that CNN discovered was a Salesian residence with a school on its campus.

When asked about the CNN report Nov. 21, Caritas Internationalis in Rome quickly released a written statement.

"Caritas is saddened and outraged by the child abuse reported by CNN in its story on Luk Delft, a Belgian religious priest who was a previous national director of Caritas Central African Republic," Aloysius John, secretary-general of the Caritas confederation, said in the statement.

"We express our compassion and solidarity with the children and their families. We thank those who have come forward. They have our full support in telling their truth. At Caritas, we are constantly working to improve our safeguarding of children both in the Central African Republic and in the rest of the world where Caritas works to help people in need. Our first duty is to protect those we serve,” he said.

Caritas Internationalis said in the statement that it "understands that those responsible have ensured that the accused is no longer in the Central African Republic, and both civil and religious authorities have been notified and are investigating the allegations."

Radio France Internationale reported Nov. 16 that a complaint of sexual abuse of a minor had been filed with the public prosecutor's office in Bangui against "the former head of the Catholic humanitarian organization Caritas."

The prosecutor opened a judicial investigation with the understanding that there could have been abuses involving other children too, the radio reported. Without naming the suspect, it said the priest was believed to have abused minors while he was heading a Caritas-run mission in Kaga Bandoro and in Bangui where he had been national director of Caritas.

RFI reported that as a precautionary measure, all international NGOs and United Nations personnel had temporarily suspended any collaboration with Caritas while the investigation was underway.