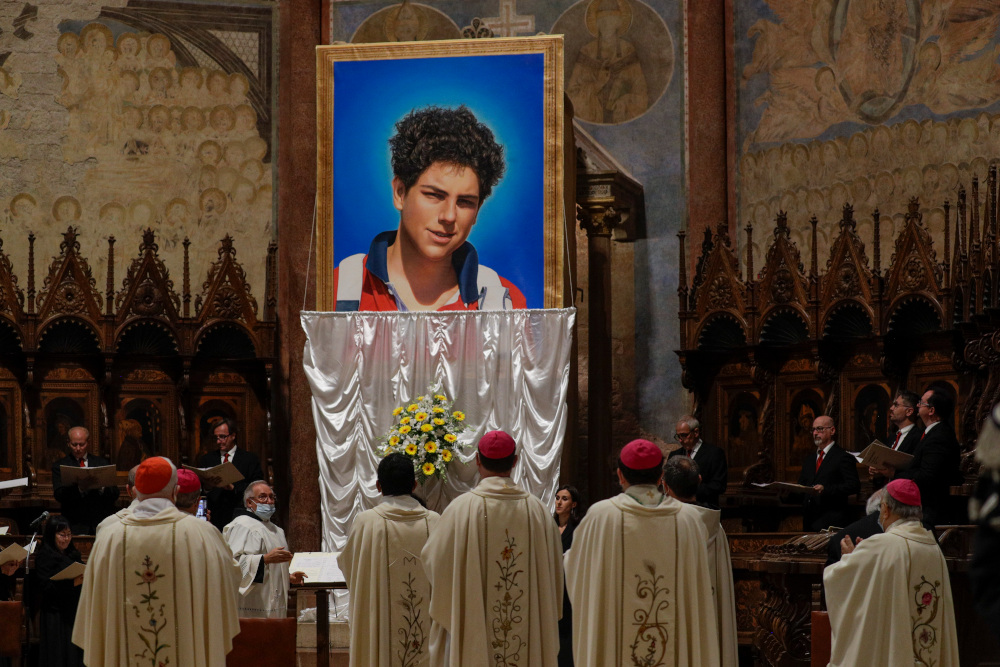 An image of 15-year-old Carlo Acutis, an Italian boy who died in 2006 of leukemia, is unveiled during his beatification ceremony celebrated by Cardinal Agostino Vallini in the St. Francis Basilica, in Assisi, Italy, Saturday, Oct. 10, 2020. (AP Photo/Gregorio Borgia)

The Catholic Church’s most recent candidate for sainthood is also its most modern.

Lying in a glass-sided casket in jeans and a track jacket, the body of Carlo Acutis, an internet enthusiast who died in 2006 of leukemia at the age of 15, was venerated by some 41,000 visitors during a 19-day-long celebration of his beatification, the last step before sainthood, that ended Monday (Oct. 19).

His hands locked above his chest, his unruly curls resting on a pillow, Acutis lay in repose at the Shrine of the Renunciation at the church of Santa Maria Maggiore in Assisi, Italy. A silicone mask was placed over his face and hands in order for the remains to be presented “with dignity for the veneration of the faithful,” according to the church.

Acutis was declared blessed by Pope Francis on Oct.10, after a woman in Brazil prayed for his intercession to heal her son suffering from a pancreatic disease. A miracle must be attributed to an individual to be recognized by the Catholic Church as blessed. Two recognized miracles can elevate the person to sainthood.

With COVID-19 still circulating in Italy, Acutis’ tomb has been closed until the pandemic allows for a safe reopening. To avoid drawing large crowds, the pope made only a brief stop in Assisi for the beatification. The newly appointed prefect of the Congregation for the Causes of Saints, Bishop Marcello Semeraro, officiated the Mass for the closing of the tomb.

“St. Francis was based on humility,” Semeraro said during the Mass. “Perhaps in this virtue lies the power of the attractiveness of Blessed Carlo Acutis.”

The appeal of Acutis for many Catholics lies in his relatability. Devotees looking forward to his canonization already refer to him as “the tracksuit saint” or the “influencer saint.” His young age and hopeful outlook on the possibilities offered by the World Wide Web turned him into a catalyzing figure for a church that often struggles to adapt to modern times.

Acutis’ fans have reported hundreds of cases of medical miracles and intercessions to his mother, hoping that one might be authenticated and open the door to canonization.

“There is one particularly appealing aspect in Carlo,” Semeraro said. “To go further in the canonization cause there needs to be a fame of holiness, and for Carlo it wasn’t necessary, it isn’t necessary,” he added, referring to the already large crowds invested in the cause for the young blessed.

Acutis lived a rather ordinary life. Born in London to Italian parents, he quickly developed an interest in then-nascent social media outlets such as YouTube and Facebook. His enthusiasm for both technology and his faith led him to create a website dedicated to the locations of Eucharistic miracles: extraordinary phenomena involving the host that Catholics consume at Mass.

Like other adolescents, Acutis loved video games, especially Pokémon and Mario Kart, but he is said to have also dedicated his time to helping the poor and homeless he encountered in his daily life by offering a meal or a kind word.

He also inspired faith in others, starting with his nonpracticing Catholic mother, and went to Mass every day.

Acutis seemed to have a keen understanding of the way the internet’s fractured and digital reality can be a struggle for many young people searching for their identity. “We are all born original, but many die as photocopies,” he famously said, a quote often repeated by Francis.

The 15-year-old incorporated in many ways the precepts of the current pontificate, founded on the care and mercy for others and fueled by passion and encountering others.

“His witness shows today’s young people that true happiness is found by putting God first and serving him in our brothers, especially the least,” Francis said in his weekly address on Oct. 11 in St. Peter’s Square, a day after Acutis was beatified.

The pope had already raised Acutis as an example in his 2018 exhortation to young people, “Christus Vivit (Christ lives),” in which Francis said that despite “the risk of self-absorption and empty pleasure” offered by the digital world, Acutis opened the door to an option of “creativity and even genius.”