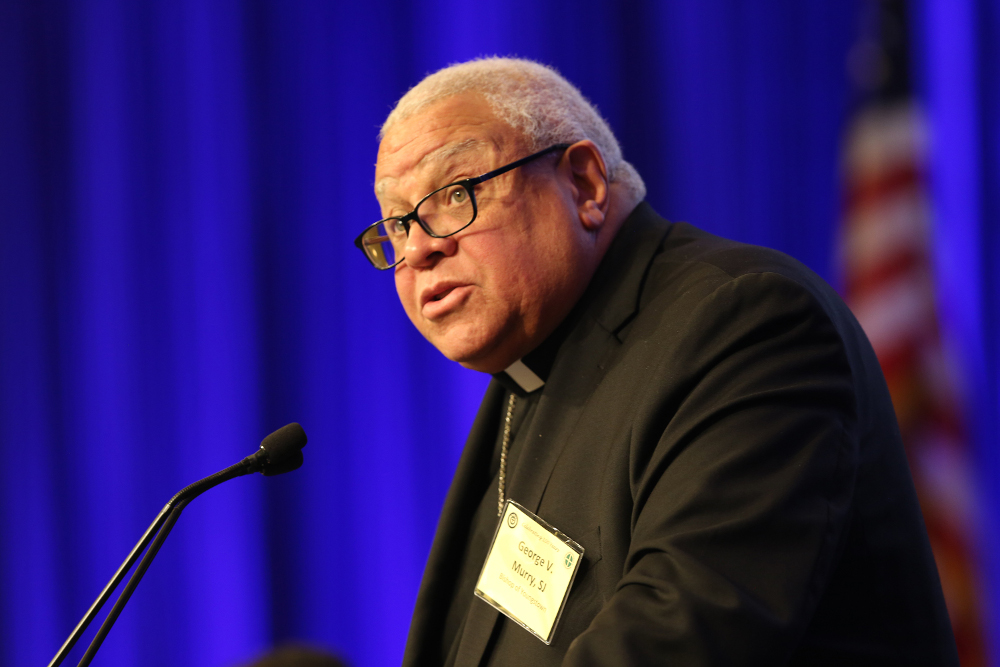 Though the Catholic Church has responded to racism for many years, some leaders and church institutions have at times been part of the problem, said a bishop who is heading a committee against racism.

Bishop George Murry, speaking to bishops gathered Nov. 13 for the U.S. Conference of Catholic Bishops fall gathering in Baltimore, said that while racism was not unique to the United States, it "lives in a particular and pernicious way in our country, in large part because of the experience of the historic evil of slavery."

Murry, who became the head of the bishops' Ad Hoc Committee Against Racism earlier this year, said the church must recognize "and frankly acknowledge" its failings.

The country has tried to address the problem before, he said, and yet, "even with that progress, one does not need to look very far to see that racism still exists and has found a troubling resurgence in modern years."

Christ calls us to break down the walls created by the evils of racism, he said.

Though African-Americans have suffered intensely from "the sin of racism," racism also has ravaged lives and livelihoods and many people of other races, he said. Its targets seem to be growing.

Weeks ago, in Charlottesville, Virginia, white supremacists and neo-Nazis marched with hate-inspired messages, leading to violence and death, he said.

"Racial hatred that is often in hiding, for some, was on full display for many," Murry said of the events in Charlottesville.

The committee he heads, he said, is working to provide pastoral accompaniment and one way is to listen to the "voices of people suffering because of racism."

Created by the U.S. bishops in August, the committee will have listening sessions and create and disseminate theological, liturgical, pastoral and community resources. The committee, he said, is also looking at ways to best commemorate the 50th anniversary to the assassination of civil rights icon the Rev. Martin Luther King Jr.

Bishops chimed in with comments and suggestions.

Bishop Gerald Kicanas, whose retirement as head of the Diocese of Tucson, Arizona, was recently accepted by Pope Francis, suggested that the bishops take "symbolic actions," much in the way other church members have taken at events such as masses on both sides of the southern border.

"Racism isn't going to be conquered by speech but by actions," said Archbishop Wilton Gregory of Atlanta.

Murry said committee's efforts also will focus on evangelization geared toward healing and reconciliation, toward conversion of those who harbor racist beliefs and who commit racist actions as well as caring for the victims of racism.

"All of this is aimed at one goal: to change hearts, which will lead to a change in behavior because every human being is created in the image and likeness of God," he said.

While on the committee, he said, he has heard certain comments.

"Some people think that there's no need to confront racism or that we should confront it only in private," Murry said, but confronting racism "is necessary because the Gospel calls us to work for justice, and racism denies justice to people simply because of their race -- and that is morally wrong."

Much work has already been done, but there is much more to be done, he said.

"Racism has lived and thrived in various ways for far too long," he said. "As a result, our efforts to root it out will not succeed overnight. Yet, the church's contribution at this time is vital."