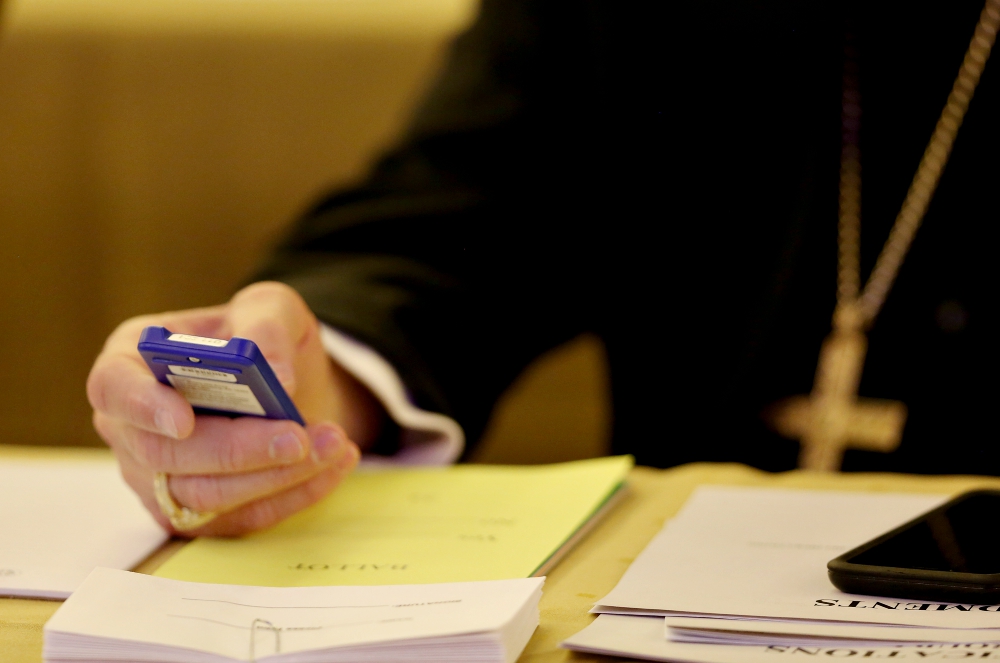 A bishop votes during elections Nov. 14 at the fall general assembly of the U.S. Conference of Catholic Bishops in Baltimore. (CNS/Bob Roller)

The most important takeaway from the U.S. bishops' plenary meeting this week in Baltimore is that they as a group remain determined to resist the pastoral impulse and approach to which Pope Francis is calling the church. Just as it took Pope John Paul II years to take the conference in a more conservative direction, it will take the bishops who champion Francis a few more years before they have the votes to take the conference in a new direction.

This was seen most obviously in their precedent-breaking decision to select Archbishop Joseph Naumann of Kansas City, Kansas, as chair of the Committee on Pro-Life Activities over Chicago Cardinal Blase Cupich. At the coffee break after the vote, one bishop said, "This was like electing Donald Trump. Naumann will say things that will embarrass all of us."

Yet, the bishops voted for him, not Cupich, knowing they would be sending a clear message to Francis.

The National Catholic Register published a Catholic News Agency report saying the Naumann selection was "seen as an endorsement of St. John Paul II's 'culture of life' approach," but, of course, in an address to the U.S. bishops in 1993, that same St. Pope John Paul II himself used the phrase "consistent ethic of life." The Register has long tried to present John Paul II as if he were an American neo-con, but he was a more complicated figure than that.

None of the other elections showed the division within the conference with the clarity of that election. Last year, Archbishop Timothy Broglio of the Archdiocese for the Military Services beat San Diego Bishop Robert McElroy in the race to lead the Committee on International Justice and Peace by 39 votes. That was taken as the margin that existed between those who are enthusiastic about Francis and those who are not. 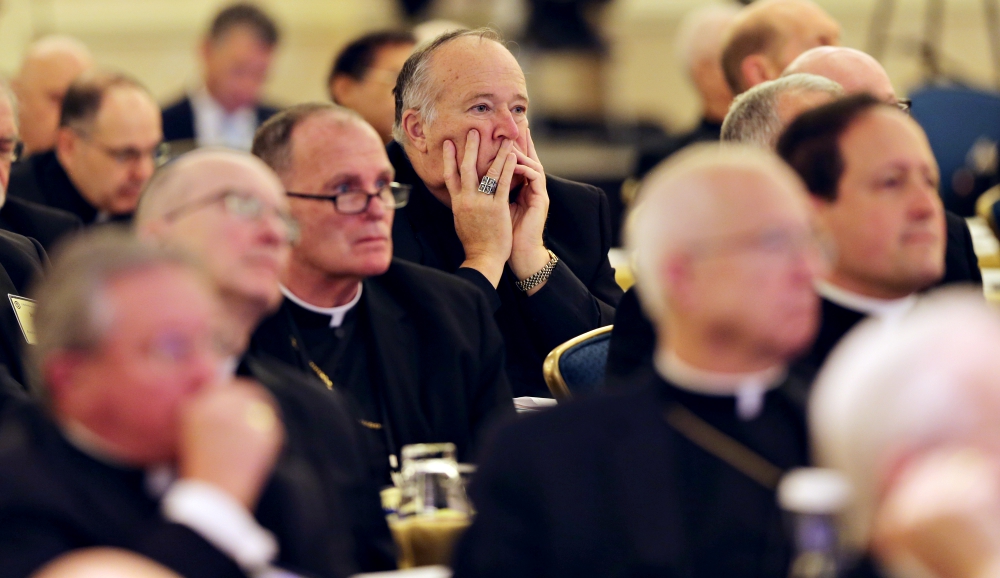 This year, the margin between Naumann and Cupich was only 14 votes, but there is some static around that number. In the first place, some bishops who may not be enthusiastic about Cupich and the consistent ethic of life might have voted for him anyway because they wanted to preserve the tradition of having a cardinal lead that committee. As well, no one, including me, knows exactly what to make of the fact that only 178 bishops of the 215 eligible to vote cast a ballot. Why so many abstentions?

Other dynamics within the U.S. Conference of Catholic Bishops emerged in the course of the two-day public sessions. As noted Monday, immigration has become almost as prominent an issue as abortion for the vast majority of bishops. Yet, the leadership of the conference did not display a sense of urgency, despite the many-faceted attacks on immigrants coming from the Trump administration.

For example, during the immigration discussion, Archbishop Michael Sheehan, emeritus of Santa Fe, New Mexico, asked if the body of bishops might issue a statement of support for immigrants in the course of the meeting. Cardinal Daniel DiNardo of Galveston-Houston was a wet blanket, first noting that they had adopted an agenda and this was not on it.

After the parliamentarian, Cincinnati Archbishop Dennis Schnurr, pointed out that the chair can always entertain a motion to set aside the rules, DiNardo said that instead of rushing it, perhaps he could issue a statement on behalf of the entire body later on.

I do not know if DiNardo simply misunderstands the way communications work, that a statement from the entire body of bishops, gathered together, has more force than a statement simply from the conference president. But the lack of a sense of urgency on this issue — after six years of hearing the sky was falling and our First Amendment rights imperiled because of a contraception mandate — was telling and disturbing.

Cupich broke the ice on an issue the bishops may be reluctant to admit: In defending immigrants, the bishops need to start with many in their own flock. Polling shows that a significant minority of Catholics are supporting Trump not despite his anti-immigrant stance, but because of it.

"We also have to have a call to conversion of our people because there's something wrong when they begin to buy into that poisoning rhetoric that gives a very skewed view," Cupich said. "There's something wrong in our churches, where the Gospel is proclaimed, and yet people leave our worship services, our Masses on weekends, with that rhetoric still echoing in their hearts."

Yet, EWTN and other conservative outlets continue to give prominence to anti-immigrant bigots like Laura Ingraham. Is nobody going to call them on this?

In that same discussion of immigration, some markers were set down for next year's discussion about "Forming Consciences for Faithful Citizenship," the quadrennial document on Catholics' civic responsibilities in voting. McElroy pointed out the limits of the term "intrinsic evil" when applied to politics, noting that no piece of legislation, even an egregious piece of legislation, is technically an intrinsic evil. Other bishops pointed to the danger of confusing the idea of prudential judgment with a get-out-of-jail free card.

This conversation included some conservative bishops, so I will predict that next year, the bishops will scrap the current version of "Faithful Citizenship" in its entirety and start a new document from scratch. 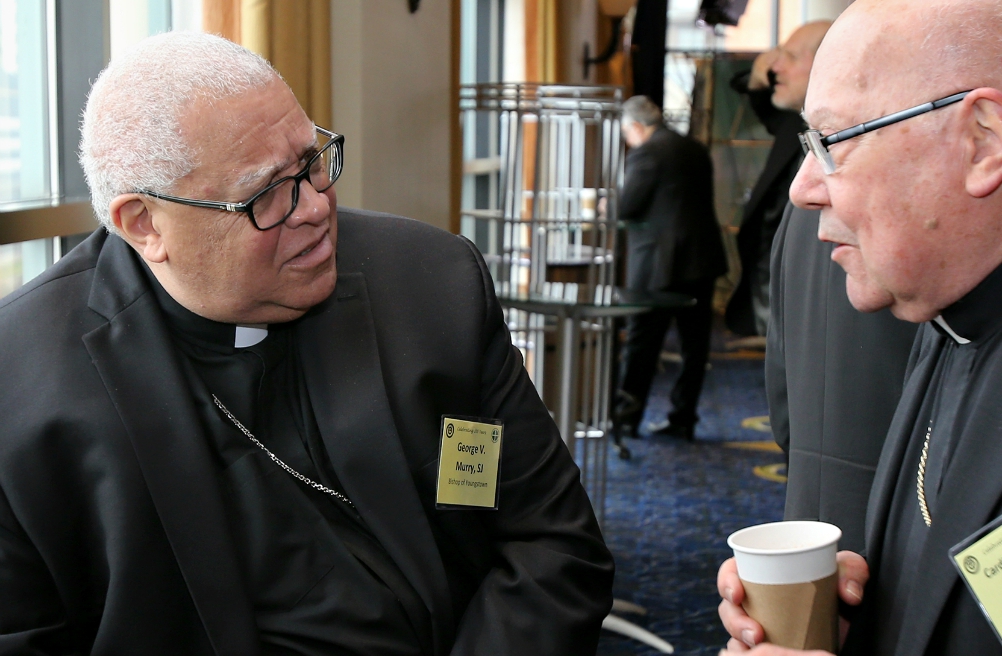 One of the emotional highlights of the meeting came during the discussion on racism. Archbishop Wilton Gregory of Atlanta noted that there were volumes of statements the bishops have issued over the years but that this is an issue that will require more than words. It will demand action as well.

His intervention received a rare round of spontaneous applause. But what actions will they undertake? I do not see DiNardo engaging in civil disobedience.

The public discussion about racism was both real and unreal. Bishop George Murry of Youngstown, Ohio, discussed the Ad Hoc Committee Against Racism's work, and he and the rest of the bishops seemed genuinely appalled by what the nation witnessed in Charlottesville, Virginia, when racists came out of the shadows and bared their hatred in public. Cardinal Joe Tobin of Newark, New Jersey, spoke forcefully about the need to acknowledge the intense suffering of many in the black community as a result of systemic racism.

But, looking around the room, I suspect about two-thirds of the bishops overlooked candidate Trump's racist dog whistles during the campaign and voted for him anyway because he promised to do away with the contraception mandate. None of the bishops may be racists, but I do not see racism becoming a priority for their conference.

In delivering the report from the Committee on Laity, Marriage, Family Life, and Youth, Bishop Richard Malone of Buffalo, New York, asked the bishops to approve the development of a pastoral plan for marriage and family life ministry and advocacy in light of Amoris Laetitia. It was nice to see someone finally mention the document.

Los Angeles Auxiliary Bishop Robert Barron commended the plan, noting that the public and media discussion of the document had been overly focused on Chapter 8, which deals with irregular situations, with insufficient attention to the richness of other parts of the text.

The bishops as a group certainly wish they did not have to deal with the document at all, but they know that can't be seen as ignoring a magisterial document, still less siding with Cardinal Raymond Burke in open opposition to the pope. The devil will be in the details: Who will be drafting the pastoral plan? Which theologians will be consulted?

Another indication of the conference's direction will come in today's executive session, which is closed to the press, at which they will select four delegates to next year's Synod of Bishops on youth. Will they seek a balanced delegation? Will they double down and select only bishops who are in the resistance?

At the conclusion of DiNardo's presidential address Monday morning, I voiced the hope that the bishops' conference might be turning the page, embracing Francis' vision more fully, recognizing that the culture war approach has failed the church and our culture.

By the time the public sessions concluded Tuesday afternoon, I realized that they are not ready to turn the page. A majority of the bishops are digging in, putting on their culture warrior armor, chasing phantoms and squandering the opportunity to reinvigorate the church that the pontificate of Francis has afforded.