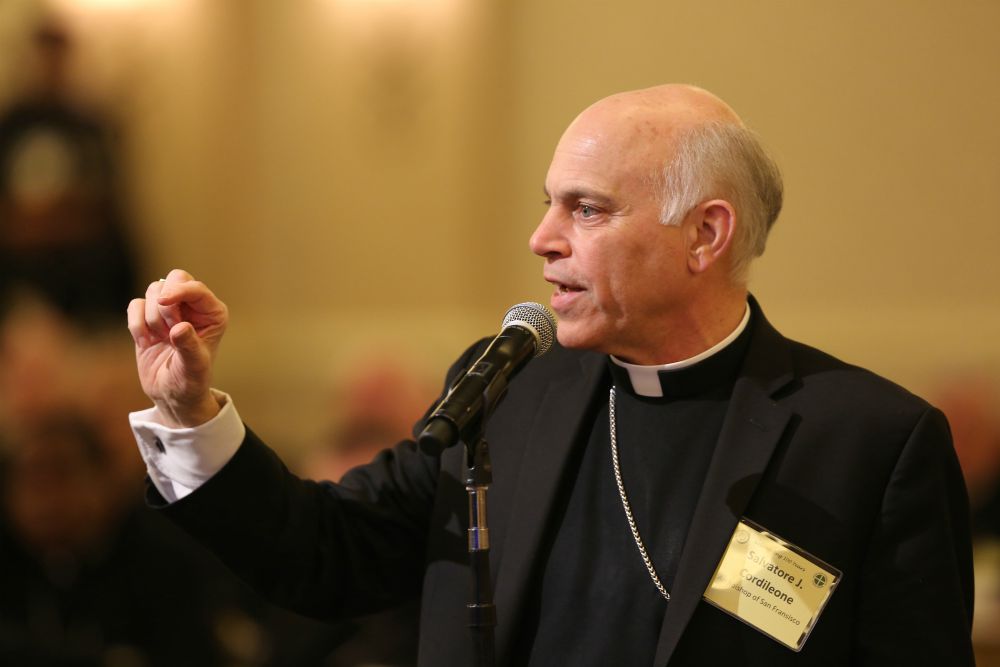 A year and a half after the release of Amoris Laetitia, the U.S. bishops have voted to create a document and pastoral plan on marriage and family life in light of Pope Francis' apostolic exhortation that followed the Synods of Bishops on the Family in 2014 and 2015.

But some bishops said they hope to avoid focusing on the controversial portions of Amoris Laetitia and instead to take advantage of the 50th anniversary of Humanae Vitae, the 1968 papal encyclical that affirmed church teaching opposing artificial contraception.

The bishops' pastoral plan — scheduled to be ready in November 2019 — would propose "a pastoral plan, not the pastoral plan," said Bishop Richard Malone of Buffalo, a member of the Committee on Laity, Marriage, Family Life and Youth, who presented the proposal to the U.S. Conference of Catholic Bishops Nov. 14 at their fall meeting in Baltimore.

Malone, stepping in for committee chair Philadelphia Archbishop Charles Chaput, who was unable to attend the meeting, said the bishops' statement and pastoral plan could provide "broad contours and considerations" in light of Amoris Laetitia, "not attempt to address every area of pastoral ministry in detail."

However, at last year's fall bishops' meeting, Amoris Laetitia was barely mentioned, let alone on the agenda. When asked last year if any implementation of the document was planned, Cardinal Daniel DiNardo of Galveston-Houston, president of the U.S. bishops' conference, answered: "I don't think so."

This year, the bishops' discussion struck a traditionalist tone, quite different than the one at a recent event at Boston College, in which lay theologians and bishops together discussed ways to implement Amoris Laetitia. At their meeting Nov. 14, bishops raised issues of marriage preparation, same-sex marriage, marriage enrichment, and contraception as issues to be included in the document and pastoral plan.

More than one bishop mentioned the anniversary of Humanae Vitae, including Archbishop Salvatore Cordileone of San Francisco, who is a past chair* of the bishops' subcommittee for the defense of marriage.

"We have the formula to keep families together," said Cordileone, noting that couples who follow the church's teaching on "responsible parenthood" have a divorce rate of less than 2 percent.

Also connecting Humanae Vitae with Amoris Laetitia was Bishop Joseph Strickland of the Diocese of Tyler, Texas, who said that both documents have been "distorted by the media" yet contain "beautiful truth."

Strickland also said evangelical Protestants in his diocese are looking to the Catholic Church for alternatives to the "contraceptive mentality."

"It's essential that we make a clear statement on marriage and family," he said.

Bishop Robert Conlon of Joliet, Illinois, agreed, noting that Catholics today "live in a culture where marriage today is basically what people want it to be," he said.

The bishops need a practical pastoral plan to counteract such cultural influences, Conlon said, citing as an example a couple who visited him recently and who felt that the marriage, "so to speak," of their daughter and another woman was "perfectly legitimate."

Several prelates called for additional marriage enrichment for couples as part of the bishops' effort, including Bishop Joseph Naumann of Kansas City, Kansas, who also mentioned the need to remember "those that are victims of divorce, particularly adult children," he said.

"We have to be sensitive to those who have been wounded in some way," Naumann said.

Responding to the calls for marriage enrichment, Auxiliary Bishop Eusebio Elizondo of Seattle noted that he has been involved in the Worldwide Marriage Encounter program for 25 years and has been using Amoris Laetitia with couples since its release.

The document, Elizondo said, has been "wonderfully received," especially among the immigrant community.

But Auxiliary Bishop Robert Baron of Los Angeles thought it was a "tragedy that the reception of this document has been so poor," he said, noting that an internet search of Amoris Laetitia finds discussion primarily of the controversial footnote about Communion for divorced and remarried Catholics.

Unfortunately, the emphasis on that issue has led "to an overlooking what's an extraordinarily rich document," he said.

*This story has been updated to correct that Archbishop Salvatore Cordileone is the past chair of the U.S. bishops subcommittee for the defense of marriage.