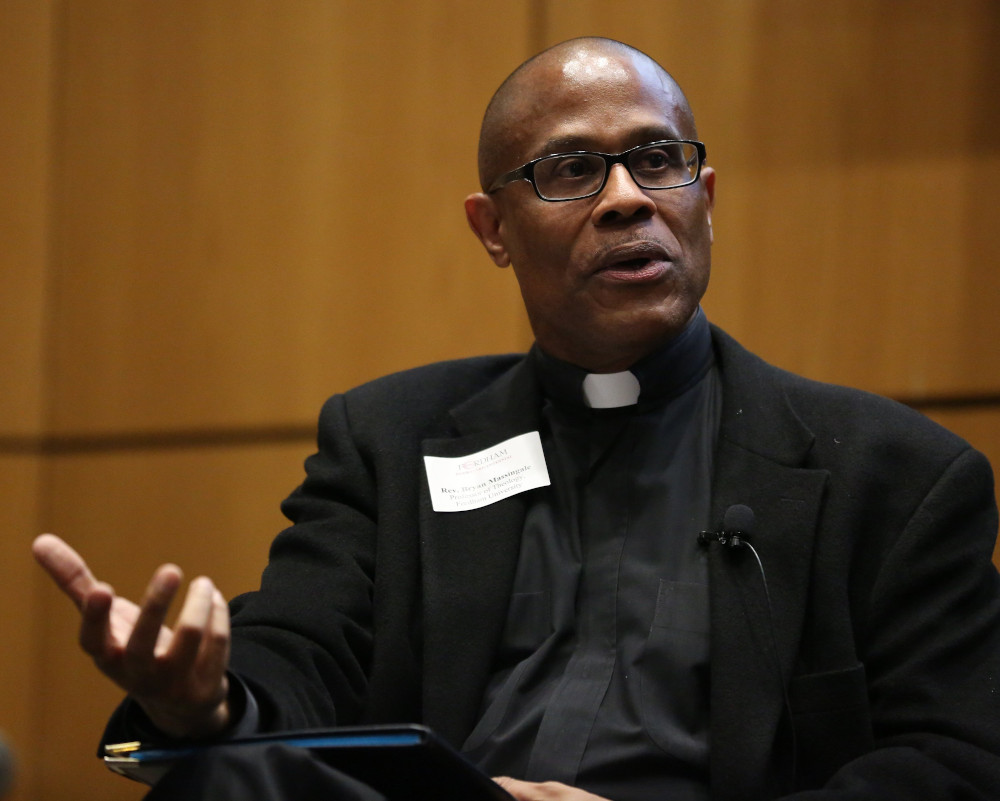 Fr. Bryan Massingale, a theology professor at Fordham University in New York City, is seen here in a 2017 panel discussion in New York. During the annual meeting of the Association of Catholic Colleges and Universities held virtually Feb. 5-6, he urged Catholic college leaders to take steps toward racial justice on their campuses. (CNS photo/Bruce Gilbert, Fordham University)

With a virtual conference it is impossible to tell if participants are nodding their heads in agreement, shifting in their seats or sitting up a little taller at a speaker's challenge.

At the end of the first plenary session Feb. 5 for members of the Association of Catholic Colleges and Universities, the presenter tried to gauge just that.

Fr. Bryan Massingale, a theology professor at Fordham University in New York, spoke for about 30 minutes to Catholic higher education leaders on the topic: "Healing the Soul of a Nation: The Challenge of Racial Justice." He said he could imagine some in the virtual audience asking: "Isn't this hard?; isn't this risky? Is it worth it?"

"I think some of you are saying: 'OMG does he realize what he's asking us to do?'" he continued, and then in reply said: "Yes, I do," without apology.

The priest, who is Black and described as a racial justice scholar, has frequently spoken about the church and racism and also wrote a book on it in 2010 called, "Racial Justice in the Catholic Church."

In his address to Catholic college leaders, which is not the first time he has addressed this group, he laid out concrete steps they could take up in this "pressing moment" to help the nation heal from its deep racial divides.

He stressed that they had to step up their game and he also didn't sugarcoat their work ahead. As he put it: Not doing anything, out of a "severe reluctance to make white people uncomfortable" only perpetuates racism.

If Catholic college leaders are just bystanders to racism and the movement of white nationalism in the country, he said, students on campus "learn it's OK be racist."

Instead, he advised school leaders to take an active role to bring healing, with the true sense of the word too — "not just a Kumbaya moment where we simply say let's let bygones be bygones."

"Authentic healing and authentic reconciliation require a community to commit itself to the long, slow, painful work of justice," he added.

In other words, it will take more than diversity courses.

For Catholic colleges and universities, this means a thorough "curricula review and overhaul," he said, so students are exposed to more than European and Northern American voices. It also means faculty and board members should reflect diversity.

Massingale said Catholic colleges also should make their resources available to the community at large, especially with continuing education for parish leaders on the work of racial healing and justice.

He said its leaders should speak up and speak the truth "about social lies that plague our country."

The priest also suggested that Catholic colleges provide times of prayer and lament for what has gone wrong, stressing that "without prayer we will not make authentic progress in our work for racial justice and healing."

He urged conference participants — even those who are not Catholic, but because they work in a Catholic institution — to follow the steps of the sacrament of reconciliation which starts with an examination of conscience, includes a lament and confession of failures and ends with making amends for penance.

That is what is required to "heal the soul of America," he stressed, saying there needs to be the action of "sitting in the contrition of discomfort and remorse" followed by and acceptance of responsibility and a commitment to do better.

In a question-and-answer session, where participants submitted questions through the online chat section, one participant asked Massingale if he still had hope, which he said he does but he is careful not to confuse that with optimism. He has hope for the future because he reminds himself, as should the participants, that what he does makes a difference.

He also was asked how he can encourage students to look to the church for guidance moving forward when he has been critical of the church's failings.

"I'm a walking billboard for that," he said, noting that it is possible to have "a deep disappointment in the church and also a deep love; the two are not mutually exclusive."

"Faith is always a work in progress," he added, saying he would not be a believer if it weren't for the church which got him started in the faith. Now, as an adult, he said he has the "responsibility to contribute to the church to make it even more the institution that it professes to be."

Read this next: The assumptions of white privilege and what we can do about it